Pakistani writer Mohsin Hamid gets an enthusiastic welcome on his first visit to India. 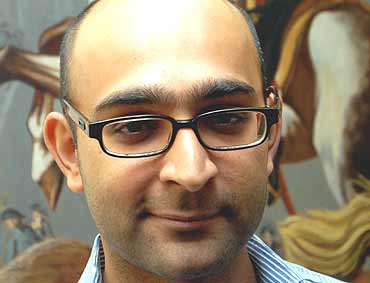 At the personal level, yes. But at the state level, relations continue to be preposterous: each of us is treated like a criminal on parole.

What does that mean?

I have to make six trips to the police station for a visit of five days.

And yet it’s a homecoming of sorts?

Yes, my instincts work here. It’s almost like Delhi is another Lahore, on planet B.

Are Indian writers in English an inspiration for you?

No. I hold them in high esteem, but the writers who influenced me are all European modernists, except Manto.

Not even Salman Rushdie?

Rushdie opened the doors of commercial and literary recognition for South Asian writers. But not an aesthetic or political space.

Your novel The Reluctant Fundamentalist runs to only 160 pages. How come?

I’d rather create a miniature painting than a Taj Mahal of a book.

Aren’t you wary of being termed too slight?

I’d rather people read my book twice than only half-way through.

Some felt your protagonist’s transformation from successful NRP to fundamentalist was unconvincing.

It depends where you come from. In the Muslim world there’s a rage that you may not have tapped into.

Is it difficult to live in London and write about Pakistan?

You can make money selling books about exotic South Asia. But I don’t want to do that.

Your best experience in India so far?

The fifteen minutes I spent in a local market hunting for a place to take some passport photos. I blended in as if I was in Lahore.