A war on terrorism, for Gandhi, would be the same terrorism 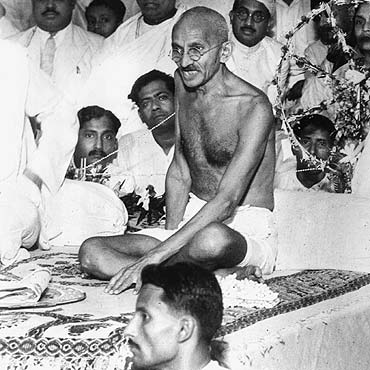 outlookindia.com
-0001-11-30T00:00:00+0553
India enjoys a curious image of non-violence worldwide. I say curious only because the Indian nation-state is no different from any other national entity in the pursuit of its self-interests in the international arena, defending its borders, and maintaining civil order by military means, when necessary. India has been engaged militarily on the Pakistan and China borders; it sent troops to Sri Lanka, and tested nuclear devices.

Still, the mantle of Mohandas Karamchand Gandhi and the largely peaceful tenor of India's independence movement have created the impression that India is a non-violent nation. It's an image India can use to its advantage, especially in the current climate of geopolitics where resurgent cultural politics is associated with violence. India's economic strength makes it a power with which most nations must reckon. Its pacifist tradition can consequently give it the moral authority to be a mediator between immoderate violent forces.

In fact, Gandhi's views about violent struggle were sharpened in response to a terrorist attack in London in 1909. An Indian student in London, Madan Lal Dhingra, had attacked an official in Britain's India office, Sir William H. Curzon-Wylie, in protest against Britain's colonial control over India. At a formal function, Dhingra fired five shots, killing the British official on the spot. He was immediately apprehended and when people in the crowd called him a murderer, he said he was only fighting for India's freedom.

Weeks later, when Gandhi arrived in London from South Africa, he was asked to debate this issue of violence with several of London's expatriate Indian nationalists. His chief opponent was Vinayak Savarkar, a militant Hindu who later founded the Hindu Mahasabha. Savarkar was reputed to have supplied the weapon for the assassination, and to have instructed the ardent Hindu assassin to say he was "prepared to die, glorying in martyrdom" as he was led to the gallows.

Shortly before the debate, Gandhi wrote to a friend that in London he had met practically no Indian who believed "India can ever become free without resorting to violence". During the debate, Gandhi challenged them on the grounds of political realism—the military might of the British could not be defeated through sporadic acts of terrorism. More important, however, was Gandhi's concerns about the effect that violent tactics would have on the Indian nationalist movement. His point was that the methods used to combat the British would become part of India's national character.

Gandhi was still thinking about these things when he returned to South Africa several weeks later. He penned his response to the Indian activists in London in the form of a book. In a preliminary way, this essay that Gandhi wrote hurriedly on the boat to Durban in 1909 (writing first with one hand and then the other to avoid getting cramps) set forth an approach to conflict resolution that he would pursue the rest of his life. The book Hind Swaraj or Indian Home Rule, describes both the goals of India's emerging independence movement and the appropriate methods to achieve it. Gandhi sketched out a non-violent approach that began with an examination of the nature of conflict. He insisted on looking beyond a specific clash between individuals to the larger issues for which they were fighting. Every conflict, Gandhi reasoned, was a contestation on two levels—between persons and between principles. Behind every fighter was the issue for which the fighter was fighting. Every fight, to Gandhi, was on some level an encounter between differing "angles of vision" illuminating the same truth.

It's this legacy of satyagraha that is associated with contemporary India, and gives Indian leaders a moral platform and a way of playing a role in global politics that is potentially quite positive. Take the current conflict with militant Muslim extremists. Could India mediate between the opponents in this global war? It's in India's self-interest to do so. For, the recent Mumbai bomb blasts indicate that at least some activists related to the jehadi ideology have targeted India.

Gandhi's guidelines enunciated in response to terrorism in 1909 indicate, first, that he supported attempts at surveillance and apprehension of the miscreants. Yet Gandhi disliked heavy-handed responses to terrorism. He showed a certain amount of pity towards Dhingra. He was under the grip of "a mad idea," Gandhi thought, arguing that it was the idea rather than the individual that needed to be encountered.

Gandhi's goal was to form a resolution of the best features of both sides of a dispute, including conflicts that are bloody. In the case of the global jehadi war, this would mean acknowledging both sets of values: the desire of many Muslims to be free from western and other non-Muslim forms of cultural domination, and the expectation of those who hold other social values that all cultural perspectives should be respected. These two sets of values are ultimately compatible. 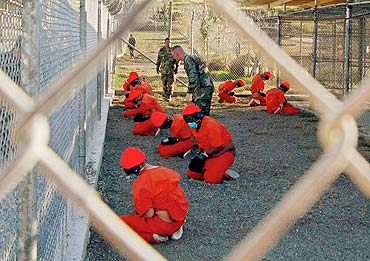 War suggests a state where reason or negotiation has no place

But actually achieving a peaceful resolution isn't so simple. Before a jehadi can be convinced that the Americans and Europeans are no longer interested in meddling in Middle East politics, significant changes will have to take place in the political culture of Middle East countries and dramatic reversals will have to occur in the West's military and economic role in the region. A solution in Kashmir will require an enormously delicate set of negotiations. In the meantime, small steps can make a large difference.

Taking a stand against violent retaliation is a step in the right direction. As Gandhi remarked to the Indian activists in London, violence begets violence. Proclaiming a "war on terrorism" is, from Gandhi's point of view, tantamount to sinking to the terrorists' level. The very idea of war suggests an absolutism of conflict where reason and negotiation have no place, and where opponents are subhuman enemies. Though violent extremists are indeed difficult opponents, they often act with a passion that may be misguided but in its own frame of reference morally justified.

Moreover, Gandhi was mindful of the way that responding to terrorism might appear to those watching on the sidelines. The struggle for public support could shift either way, and for this reason it would be a tragic error—and perhaps a self-fulfilling prophecy—to regard everyone who is nominally on the other side as enemies. Islamophophia, for instance, can force moderate Muslims into the arms of a more extreme Islamic position.

Gandhi urged Dhingra be treated with caution but also with respect, just as any other suspect in a crime would be. Torture, Gandhi thought, is ineffective not just because it rarely produces useful information but also because it corrupts the moral character of a society allowing its use. Perhaps Gandhi's most enduring lesson is that the moral character of a society is shaped by the way it responds to crisis and catastrophe.

(Mark Juergensmeyer is professor of sociology and director of the Orfalea Center for Global and International Studies, University of California, Santa Barbara. His many books include Gandhi's Way and Terror in the Mind of God.)

On Paper, A New India