“The future is in tearing down old buildings and constructing high-rises in their place and here the kar sevaks could come in handy,” Justice Liberhan observed. 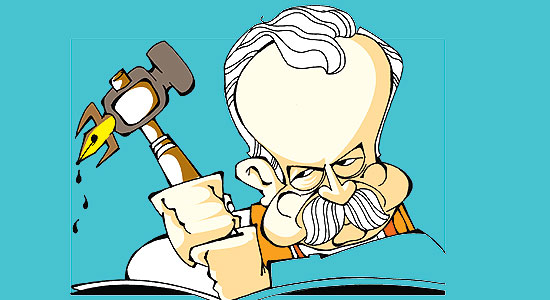 When my phone rang early on Wednesday morning, I wondered who was on the other end. You won’t believe it, it was Justice M.S. Liberhan! Yes, the very Liberhan whose report on the Babri Masjid demolition was creating so much ruckus. And guess why the judge had called? “Mohan Bhagwatji, if you allow me, I have a constructive suggestion to make,” he says. I responded saying that in the RSS we have a tradition of respecting the advice of elders and, though I am the sarsanghchalak, I am open to new ideas. Unless of course it involves changing our khaki knickers for bermudas. “No, no, this is a business proposition,” the judge says. Naturally, I was all ears. In the next few minutes, Liberhanji detailed his proposal. In a nutshell, what he was espousing was a joint venture with the Sangh parivar to start a demolition and construction company. “The future is in tearing down old buildings and constructing high-rises in their place and here the kar sevaks could come in handy,” he observed.

I had to admit, it was a wonderful idea. The energy of our kar sevaks could be channelised for something purposeful. And then the VHP could take over, conduct shilanyas, and build the new building brick by brick. “Bhagwatji, remember every building is like a temple to the Lord since the almighty is omnipresent,” Liberhan said philosophically. “And remember, with every new construction the RSS will grow richer and bigger and may even be listed on the stockmarket,” he added, driving home his point. I said I would consider his proposal and get back in a few days.

Well, I don’t know much about stocks but my friend Arun Shourie knows quite a bit. So, when I sought his opinion on the JV that Liberhanji had proposed, he quickly gave the go-ahead. “The BJP cannot fire the Ayodhya bullet twice but the anger and frustration of the kar sevaks over the Ram temple not being built is an energy resource that can be gainfully utilised,” he noted. Shourieji also advised me to get in touch with Murugan and Strangely who he strongly recommended we consider as consultants for the project. But when I called their New York office, I was told that Mr Murugan was away trading carbon credits for chewing gum and Mr Strangely had gone fishing in troubled waters.... Actually, it took me a while to figure out that I had reached a wrong number and it was a kid with a churlish sense of humour on the other end. Anyway, that aside, I finally did get through to the other consultant suggested by Shourieji—Goldman Sucks. Mr Sucks was very excited and said a team of executives, accompanied by their golf kits, would be in Nagpur with a PowerPoint presentation.

So, finally, will the RSS metamorphose into a mega corporation? I have a dream that it will. And I am confident we shall go from strength to strength with every demolition....

(as imagined by Ajith Pillai)