There’s a problem with accepting a Modi victory as certain 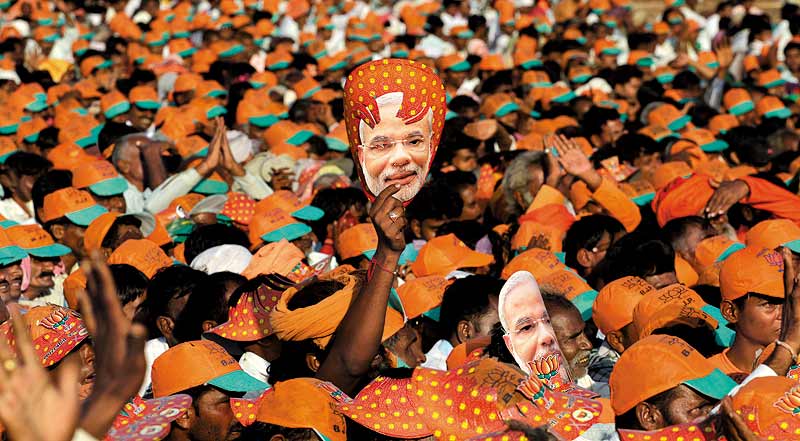 Even before the campaign process has reached its full momentum in the state of Gujarat, three generalisations dominate the marketplace of political ideas about its consequences: a) that a third-time victory for chief minister Narendra Modi in Gujarat is nearly certain; b) since this victory is a foregone conclusion, the time is ripe for a national role for Modi, possibly as the next PM; c) that this victory is likely to be a direct outcome of ‘good governance’, understood primarily as robust economic growth, delivered under Modi’s leadership.

I see this approach as problematic for two reasons: in terms of method, it seems that QED has been etched in even before one could see the proof of what one set out to examine. More importantly, however, there is a certain naivete in this formulation that leads us to a complacence in examining the very complicated and nuanced role of electoral competition currently being witnessed in this state. I engage myself with unravelling this second strand, as viewed in the terrain of practical politics, analysing the complex chain of statements, yatras, speeches, strategies and counter-strategies of the main contenders—the ruling Bharatiya Janata Party and the Congress, which is in opposition in Gujarat. I then examine the robustness of each of these three ‘generalisations’, and in conclusion argue that although it is advantage Modi, there is political competition to be witnessed before one could declare the match won.

For one, the Congress in the field does have a sense of local issues, an understanding of pockets of disadvantage, and also a macro-strategy of where to deploy its energies spatially. In associating themselves with the struggles against displacements caused by the Sabarmati riverfront development project or in the Vadilal Sarabhai Hospital area, the party has been aligning itself on the right side of popular grievances and appears to be in the activist mould, organising people, leading protests, and moving the courts for redress. It feels Sonia Gandhi’s campaigns will be of advantage, given the party’s historical roots in the state.

The party’s grassroots base was evident even in the panchayat elections held over 2010-11. The Congress has a high voteshare of 30 per cent or more in many districts across the state. This has not translated evenly into enough seats for the party because of the known difficulties of the first-past-the-post system. Also, the margins of victory are as low as one or two votes in these local elections. But the party’s most impressive pre-poll offering has been its announcement of the Ghar-nu-Ghar scheme, promising affordable housing for the poor in August this year. The huge turnout for filling the forms—nearly 15 lakh people—led even Modi to roll out a direct counter-strategy in the form Garib Kalyan Melas, promising over Rs 2,000 crore for housing the poor.

Part of the Congress strategy is to focus on Saurashtra, where farmers are disgruntled and Keshubhai roosts.

As a macro-strategy, the Congress is concentrating on Saurashtra, where farmers have been adversely hit on account of drought and debt. The region accounts for nearly a third of the total seats and is the stronghold of rebel BJP leader Keshubhai Patel, now leading the Gujarat Parivartan Party. Also, the central government’s decision to lift the ban on cotton exports is of recent vintage, and can win favours for the party. Farmer disgruntlement owing to disadvantages faced by agriculture when the going is good for urban-centred manufacturing and services, along with the rebel factor, makes for a strong force. After all, the defeat of ‘ceo’ Chandrababu Naidu in Andhra Pradesh was scripted similarly, combining agricultural disgruntlement and sentiments of regional disadvantage. As an unfolding of this macro-strategy, Sonia launched the party’s campaign in Rajkot, in the heart of Saurashtra.

To the advantage of the BJP is the fact that there is no state-wide anti-incumbency even after a decade-long rule by Modi. Economic indicators are certainly robust, with state GDP growth rates averaging 10 per cent or more (between 2002-10)—the mythical double digit target which the national economy has been aspiring for but unable to achieve even under Manmohan Singh’s leadership. Interestingly, Modi has raised it to a campaign pitch,  asking the prime minister to “learn” from the Gujarat growth story. The sectoral composition of this growth rate, particularly the advances in agriculture, have received wide attention. Although there have been disputes whether the growth has been as high as Modi claims, even modest estimates available with the Planning Commission and economist Y.K. Alagh accept agriculture grew at higher than national average at around six per cent or more. Economists also note the significance of the consistently high growth rate in the manufacturing sector, notwithstanding the constraints it faces.

But electoral competition, and even more electoral victories, are not simple outcomes of people calculating the benefits of policies and voting for political leaders who set the regional economy right. Were this hypothesis correct, why would Modi have announced a series of cash incentives hours before the model code of conduct set in? These include promises of farm loan and electricity bill waivers, enhanced allowances to home guards and talati-mantris (as the patwaris of northern India or village officers of the south are called in Gujarat), and payment of arrears to teachers among others. Even the village sarpanch has been promised a salary of Rs 1,000. The amounts may seem small, but the significance is that lower-level government officers, organised under the umbrella body the Gujarat Rajya Karamchari Samiti, are said to be opposed to Modi. The cash transfers build a new constituency of supporters, while countering some of the opposition from the lower bureaucracy.

Noted social scientist Achyut Yagnik points out that Modi’s political craft in these matters is such that he even passes off benefits from centrally sponsored schemes as if these were being done by him. For example, the scholarships for SC/ST students (given by the Union ministry for social justice and empowerment) are distributed by him during melas. Even the local unit of the Congresss admits to Modi’s ability to outwit them on their issues of strength and contest anything the Congress at the Centre may have done for the state.

Of greater bearing for electoral fortunes is Modi’s use of political vocabulary and tailoring the campaign language to hype his achievements and castigate the “Congres in the Centre”. In election rallies, the Centre and Sonia are his target, as if the party’s state unit led by Deepak Babariya, Shaktisinh Gohil, Arjun Modhvadia and Shankersinh Vaghela has no bearing. To malign the image further, Modi adds that the “Congress and the CBI are fighting the elections together”. To the question whether he will become the PM if he wins a third time, he either maintains a studied silence or says that he will “concentrate on making a divya-bhavya Gujarat”. Modi says in his election campaigns that the development he has demonstrated until now is merely filling the gaddha (potholes, meaning development deficit) created during the long innings of Congress rule. It is now that he will add his bit. Of course, party president Nitin Gadkari comes close to admitting this: “Modi may be one of the six-seven candidates of the party” after the election victory. And the campaign is abuzz with those near him (and some among them confirming to be members of the RSS) claiming that this is the run-up to his claim for prime ministership.

Coming back to the three generalisations I began with, it is the first of which the chances seem highly likely. But Modi’s victory is unlikely to be attained without competition from the local unit of the Congress. The Congress has also made pro-poor election promises of housing and employment for the poor, free laptops, computerised education, and free treatment in hospitals. How well they are able to sustain these as campaign issues, and combine their attack along with the challenges from BJP dissidents, may have implications for this election. The caveat of course is that the declining image of the Congress at the Centre may very well be used effectively by Modi, to counter the challenge from its local unit. The second generalisation about “Modi as PM” for the moment seems to be a ploy to hype the leader into a “larger than real” stature, and is certainly a political statement intended for local Gujarati consumption. Finally, robust growth notwithstanding, Modi is not relying on these laurels alone. So also the opposition, which has understood that growth pursued in a certain way produces grievances amongst the displaced and the rural poor, and these can be woven into a counter-campaign strategy. In conclusion, it is advantage Modi, but the battle is yet to be fought.

(The writer is a researcher at the London School of Economics.)