Belying all talk of a counter-wave, the BJP mascot wins with aplomb More Coverage 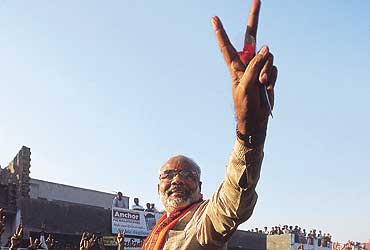 outlookindia.com
-0001-11-30T00:00:00+0553
Now that the deed is done and the battle's lost and won, it is clear that the hero of the day is Narendra Modi. The margin of his win is so huge and emphatic that it has upset all political calculations, both in the Congress and even in the BJP. As the faithful parivar cadre sees it, the age of Hindutva is again dawning bright and clear. The huge victory margin will undoubtedly change the BJP's future strategy and impact hugely on national politics. As the Congress must introspect, it cannot hope to win an election by chasing the BJP's tail. If the electorate wants Hindutva, it'll go for the real thing. And the Gujarat electorate has opted for the hard line practiced by Modi.

Modi's victory is so large that it has ironically upset many of the calculations of the BJP's central leadership. A victorious but tamed Modi would have been easier for the high command to handle. But having notched up the only conclusive BJP win in recent years, Modi will now be unstoppable. As BJP treasurer Ramdas Agarwal, who had also handled Gujarat, says, "The victory is beyond anyone's expectations. We thought 110 would be good. There's no doubt that Modi will now be the star campaigner of the party even at the national level." Adds Rameshwar Prasad, a BJP MLA from Bihar and vice-president of the party's youth wing, "After a long time, the cadre is enthused. It will change the mood and be an adrenalin shot for the party in future elections."

The Gujarat outcome will have a direct fallout on the two big leaders of the party. BJP leaders say Prime Minister Atal Behari Vajpayee's conciliatory line will be dropped altogether as the BJP gears up for a spate of vital assembly polls before the 2004 general election. VHP leader Praveen Togadia, who takes a large part of the credit for Modi's win, has already set the tone by suggesting that Vajpayee is actually a Congressman. There will undoubtedly also be an attempt to reopen the question of the PM making way for deputy prime minister L.K. Advani. But as a BJP MP says, "Vajpayee will survive because of the nda, as none of the smaller parties want to deal with a resurgent BJP." Given Vajpayee's past track record, he may also do a flip-flop and go in for a hardline stance.

Curiously, Advani's standing as the true hardline ideologue of the party has also been affected. That space is now completely occupied by Modi, the new darling of the VHP and RSS cadres. The two ends of the BJP's ideological spectrum are now represented by Vajpayee and Modi, with Advani somewhere in between. But a veteran RSS ideologue and BJP Rajya Sabha member warns, "Don't jump to conclusions and build up Modi as a challenger to the great leaders of our party. Vajpayee and Advani have qualities that inspire loyalty. They are not petty men. Modi has none of those qualities. He's always been popular with the cadres but his only friend at the national level is Arun Jaitley. The other second-rung leaders of the BJP actively dislike him."

Still, these petty political manipulations and caste equations within the party will be rendered irrelevant given that Modi has captured the imagination of the great Hindu juggernaut, which appeared to have lost direction in the decade after Ayodhya. Says BJP Rajya Sabha MP Balbir Punj, "This election will set a benchmark for the future. It shows that if anyone tries to play with Hindu sentiments, Hindu society has the capacity to get over caste differences and come together." Adds Tarun Vijay, editor of RSS mouthpiece Panchajanya, "No one will be able to oppress Hindus after this!"

So convincing was the BJP's win that there was an air of disbelief at the Congress headquarters at Delhi's 24, Akbar Road. The Congress leadership had hoped rather than expected to win but hadn't dreamed of so comprehensive a rout.With characteristic resilience, however, party leaders rallied. The Gujarat electoral result, they said, was an aberration rather than a reversal of fortune.

"It was a one-time discharge of emotion. If Lok Sabha or even assembly elections were held once again, the Congress would sweep Gujarat," declared party spokesperson S. Jaipal Reddy. According to him and other Congress leaders, the "good governance" plank which failed to combat Modi's Godhra card will work in forthcoming assembly polls in other states and in the general elections.

For the Congress president personally, it is a major disappointment. Thanks to the efforts of the BJP's spin doctors, the election was projected as a face-off between the two chief campaigners, Sonia Gandhi and Modi, rather than between the prospective chief ministers. A Congress victory in a state traumatised by riots and supposedly polarised along communal lines would have endowed Sonia with a healing touch and affirmed her acceptability among both the majority and minority communities. Now, she's back to square one.

As for Gujarat PCC chief Shankersinh Vaghela, it does not appear that he managed to pull the 12 per cent voteshare he managed in the last election. The "Vaghela vote" was seen as one of the important variables in this election but the incremental increase in voteshare has been only 4 per cent, from 34 to 38 per cent. However, adversaries of the so-called "soft Hindutva" line adopted by the Congress in the Gujarat campaign are already training their guns on him and on AICC general secretary, Kamal Nath, who ran the Congress roadshow in the state.

They have been charged with taking the Muslim vote for granted, to the extent that national-level Muslim leaders were not encouraged to visit the state. The sister of the late Congress leader Ehsan Jaffrey, slain during the riots, has already expressed her disillusionment with the party. Says a senior and veteran Congress leader, "For the first time in 30 years with the party, I was made to feel I was a Muslim." At least two Congress Working Committee members admitted "competitive Hindutva" was a mistake. "This was not the first and last election for the Congress," they point out.

Clearly, the lack of Opposition unity wasn't a factor in Modi's victory. The two chief spoilsports, the Samajwadi Party (SP) and Nationalist Congress Party, didn't poll enough votes to swing the election results, and the margins were sizeable. Which also makes it quite clear that the minorities were solidly behind the Congress, a shot in the arm for the party. On the other hand, the fact that rjd leader Laloo Prasad Yadav and Lokshakti leader Ram Vilas Paswan attracted substantial crowds during the campaign is likely to fuel efforts to bring them both together and keep them on board. The role of the backwards-Dalit duo is likely to expand in order to counteract Mayawati, who campaigned for the BJP.

There are two schools of thought in the Congress. One believes that Gujarat being an isolated case, the Hindutva wave will die naturally, as it did in the post-Babri Masjid demolition scenario. The other believes the Congress will have to come up with ways to counter the Modi phenomenon. Even with anti-incumbency and misgovernance working for the Congress, caste and communal factors swept the BJP to victory. It is this second school which advocates close ties with the SP, on the ground that Mulayam Singh "represents the intermediate castes, which are not going anywhere" and could be a formidable force should the SP ally with the Congress.

Gujarat 2002 has also given the BJP its ideological mantra for the future: terrorism. Modi's crude message proved highly effective. Mian Musharraf equals Muslims. Muslims equal terrorists.Modi with his band of VHP activists managed to pull off the remarkable feat of convincing the majority Hindu community that they must both fear and "put in their place" Muslims who account for only 10 per cent of the population and have known only misfortune in recent times in Gujarat. Taking a dig at the Congress, Jaitley says, "We did not follow Hindutva. The Congress did that. Our plank was terrorism and incidents like Godhra and Akshardham."

There is no doubt now that this strategy will be replicated in states where polls are coming up. The only real debate within the BJP is over how effective it will be in different social set-ups. In March next year, the BJP-ruled Himachal Pradesh faces elections. BJP MP from the state Maheshwar Singh asks: "How can we run a similar campaign in Himachal Pradesh when there are no minorities here?" But Sangh parivar strategists now believe that the Modi effect could catch on in the state. Before he was sent off to Gujarat as chief minister, Modi had been in charge of Himachal and had played a key role in installing the BJP there. Now as Agarwal says, "He will be the star campaigner for us in Himachal Pradesh."

Later in the year, Rajasthan and Madhya Pradesh, both Congress-ruled but with the BJP as the main Opposition, face elections. The fact that the BJP won all three by-elections in Rajasthan has created a sense of euphoria. Says BJP MP Jaswant Singh Bishnoi, "A BJP win in Gujarat will naturally affect the mood in Rajasthan though caste equations in my state are more important." In spite of a clearly different set of circumstances prevailing in Gujarat and Rajasthan, parivar strategists point out that both are border states with visible pockets of minority influence. Hence, post-Gujarat, they see Rajasthan ripe for Modi-politics.

As far as the BJP's fortunes in Madhya Pradesh are concerned, there are two important indicators from Gujarat. As Agarwal points out, "We have swept the Bhil adivasi belt in Gujarat. That win is built on the work done by Sangh organisations. There are similar pockets in Madhya Pradesh." Second, party strategists are laying great emphasis on the fact that Mayawati campaigned for the BJP in Gujarat. Says a senior party leader, "A BJP-BSP tie-up is vital to our performance in MP and then in the general elections. The party high command has decided on this course though state units have some problems."

Still, many BJP leaders point out that Modi's line worked because of the Godhra incident and its ripple effect. Says a senior RSS ideologue, "Actually, it is Maharashtra and Karnataka which have the social conditions to replicate this type of communal polarisation but for that, we first need an incident like Godhra." Even if the party is not "blessed" with such incidents, right now a strong anti-minority terrorism line appears the only winning strategy for the BJP. For, Modi has proved conclusively that communal polarisation pays. Crudely translated, like much of his election rhetoric, the message from Gujarat is that the greater the hatred between communities, the bigger the chances for a BJP win.