Modi-Shah ‘Jugalbandi’ Is The Biggest Story Of 2019 Election Mandate

Theirs is a unique partnership that successfully ground down the anti-BJP narratives around demonetisation, farm distress and ­job flight, getting people across sections to vote for Modi. And Amit Shah’s realpolitik may now enable the PM to build an inclusive image. 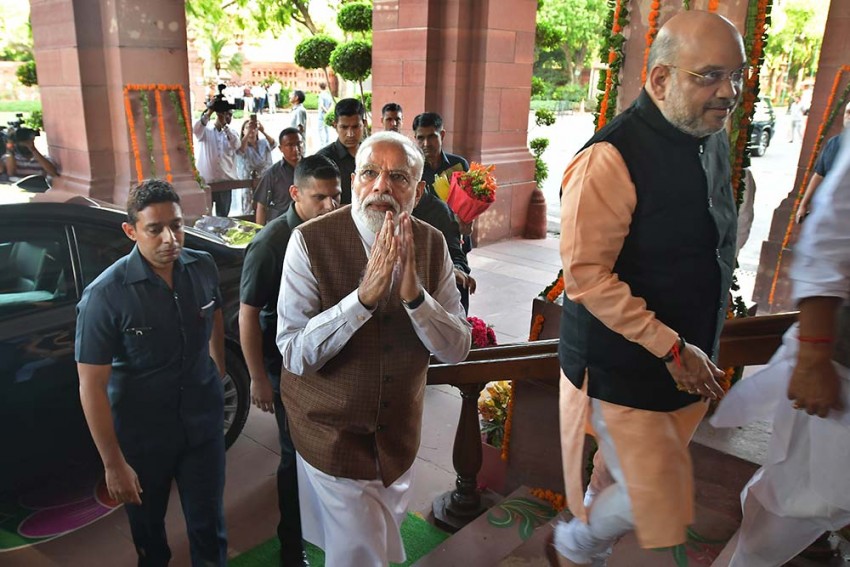 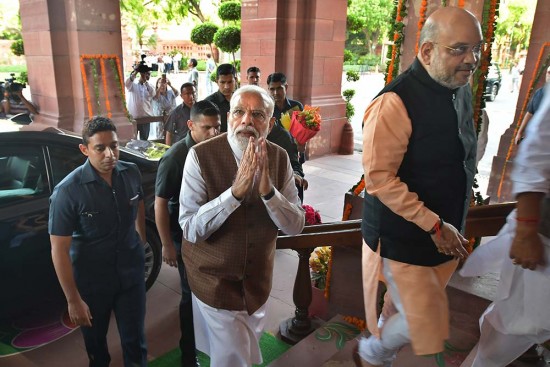 It’s an epic rerun. The man who is already a metaphor for something superhuman has reduced every­thing before him to a cipher. Like some mythic hero, he turned every weak link into a Teflon-coated asset. But there’s one unmistakable change in the story. The voters saw only ‘Modi’, the endless promotionals carried only his face, and it’s surely his visage that trumped the facelessness of the Opposition—but looming over the landscape was also another face, another mind. Chandragupta-­Chanakya is the preferred reference for bhakts. But perhaps that doesn’t express this new chemistry entirely. On May 17, as PM Narendra Modi joined BJP president Amit Shah for the press conference at the party headquarters, he seemed comfortable taking a backseat. “I am a disciplined soldier; the party president is everything for me,” said Modi.

This raja-mantri duet is clearly a new kind of compound. The latter has, visibly, more executive powers than all the sundry Kautilyas of history, who only ideated, and yet he yields to the first’s primacy. BJP leaders and workers alike are awestruck by the chemistry, so are all the rest. Some call it the ‘Jai-Veeru ki jodi’, from the classic movie Sholay—a rare brotherhood built on trust—others ­recall the partnership of Sachin and Sehwag. Whatever your preferred metaphor, the Modi-Shah ‘jugalbandi’ is ­undoubtedly the biggest story of the ­unprecedented 2019 mandate.

“It’s a package deal”—that’s how Amit Shah had described the winning form­ula to Outlook a couple of years ago, when asked whether it was Modi’s charisma or his strategising that buoyed the party. “You cannot separate the two,” he said in that interview. Now, increasingly evidently, Modi is according Shah a pride of place beside him. The two came together for the victory rally at the BJP HQ. Modi talked of “chemistry over arithmetic”. That wasn’t just the party’s social chemistry—transcending caste and identity—but also the one between him and Shah.  Something palpably, ­fatally, absent on the other side.

Modi is giving Amit Shah a pride of place beside him. “The party president is everything for me,” the PM had said.

In fact, Modi and Shah are known to talk to each other every day, sometimes four-five times. This week, they had a four-hour meeting where the duo discussed cabinet formation—who should remain, who should go, who could be the new faces. They have been travelling the country shoulder-to-shoulder after the mandate. Shah accompanied Modi to Varanasi and sat next to him as he performed puja at the Kashi Vishwa­nath temple. Earlier too, during nomination time, Shah was with Modi as he perfor­med the Ganga aarti. Incidentally, it was Shah who had backed the idea of Modi contesting from Varanasi in 2014 to strengthen the party in eastern UP. 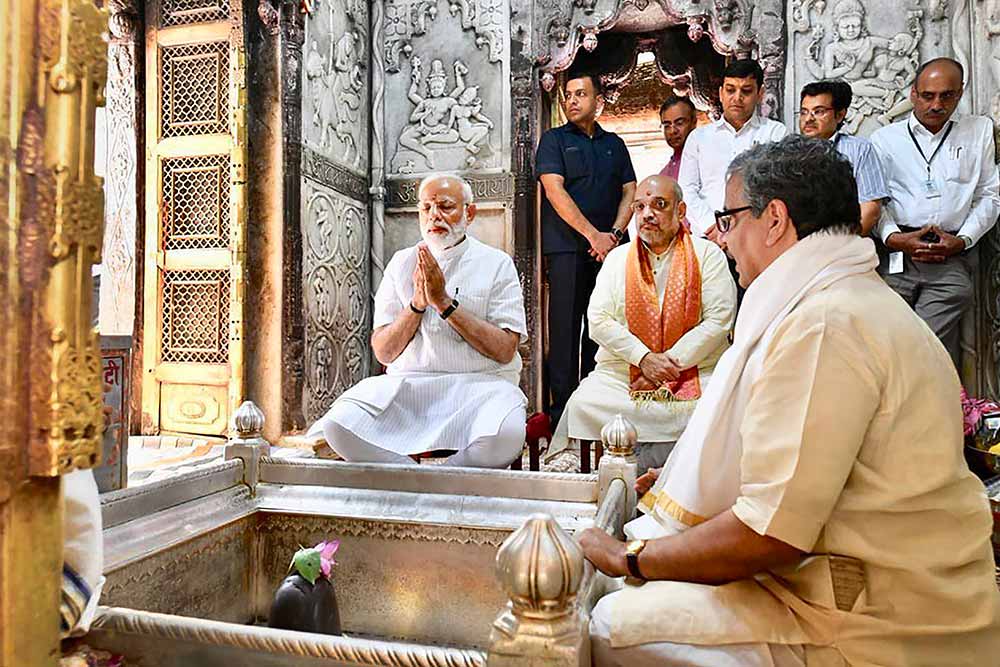 Modi was the hologram, Amit Shah the last mile connnectivity.

“It’s the PM’s way of acknowledging Shah’s role in the victory,” says a senior BJP leader. “Shah is now a stakeholder. In 2014, he was party general secretary in-charge of UP, so had a limited role. This time, they worked in tandem to exp­and the footprint beyond the Hindi heartland. Now, the partnership is complete. Modi is not treating him as a protégé anymore but as a partner.” Several party leaders now foresee a change of equation between the two where public proclamations (and policymaking) are concerned. According to R. Balashankar, political analyst and member of the BJP’s central committee on training, Shah deserves the credit for quietly and indefatigably building the organisational strength that offered an absolute fallback assurance to Modi. “He has taken a lot of burden away from Modiji. He can focus completely on administration and good governance,” he adds. Shah also ensured the party’s victory in as many as 80 non-traditional BJP seats, systematically, clinically, and built it around the one thing that seems to work in India: the Modi narrative.

That political security has also created the space for the Modi narrative to upg­rade itself. “Modi has already indicated more inclusivity and statesmanship in his post-victory speeches. He’s now talking about ‘sabka vishwas’, earning the trust of minorities­—something this dispensation has never done before. He has promised to take everyone along, to not to be vindictive. If he succeeds, he’ll ensure another term for himself,” says a senior party leader. Balashankar too says it’s time for Modi to write his legacy and that India will see a more mature, more self-assured Modi. “With this win, he has ensured his place in history. He is more experienced now and knows Delhi and the way it functions quite well. The narratives that were built up—people complaining about demonetisation, farmers’ distress and jobs—have all been shattered with people across sections voting for him. Modi has nothing to fear. By all accounts, he will be more inclusive, as he has the assurance that the party is here to stay, like the Congress of the 1960s,” says the former editor of RSS mouthpiece Organiser.

The Shah factor is integral to this. “As a team, this might be the one of the most ideal and unique partnerships India has ever seen. There has not been a single instance of dichotomy or clash of interests. Shah enjoys complete freedom in party affairs. Modi was lucky to have such a capable strategist and an able party chief,” says Balashankar. Another party leader concurs that Modi will surely be more of a statesman than a rabble-rouser now. However, he cautions, the party’s core would want him to be combative and continue in the vein he campaig­ned in. Any softening will be seen as a weakness and yielding to the Oppo­sition. This is where the duopoly’s real strength may lie in government.

“This is where Shah will have to step in. As the perfect foil, Shah will conti­nue with his near-ruthless agenda of filling in the saffron gaps in the country. While Modi may try to soften his image, Shah will be relentless in pursuit of his goal that includes breaching the South India barrier. The Chanakya that he is, he won’t stop deploying the ‘saam-daam-dand-bhed’ formula. One can’t imagine a soft Shah, who doesn’t talk about termites,” the leader adds with a smile. Despite his Hindutva past, Modi has range. Shah’s presence allows him to be tactically mobile.

But, to be sure, Shah too has evolved. Once considered autocratic and blunt, he now evinces all the sagacity and flexibility ­required in realpolitik. Unlike the Congress with its potential allies, he yielded to the JD(U) and the Shiv Sena during seat-sharing talks; both paid off. He meticulously plots the moves on the chessboard in tandem with Modi’s ambitions. “Modi dreams and Shah makes it happen,” is how a senior BJP leader describes it.

“There’s been no instance of clash of ­interests between Modi and Shah,” says the BJP’s R. ­Balashankar.

It’s been like that for nearly four decades. Shah was 17 when he met Modi at an RSS shakha at Ahmeda­bad’s Naranpura for the first time. Modi was a pracharak, in-charge of youth affairs in the state, and Shah was an ABVP activist. Modi saw a spark in Shah, and that bond has only grown since. Modi taps into Shah’s ­razor-sharp strategising and ­ingenious execution. Shah works with single-minded determination and ­loyalty. They together broke the Congress stranglehold over Gujarat, and have now done the same in almost the entire country.

“There’s an implicit trust. They have the same goal, of seeing a saffron India,” says a senior party leader from Gujarat, who has seen the two from close quarters over the decades. That it was a ‘duet’ also helped in the perfect coordination between party and government, a factor palpably missing in the Vajpayee and Manmohan Singh regimes. ‘Differences’, ‘working at cross-purposes’, those were the ­frequent descriptors. Here, Shah can ask any minister to campaign, hold press interactions and public meetings ­during polls. It is believed to be on Shah’s suggestion that Modi ­visited the BJP office for party ­meetings so that the image of coordination was emphasised.

A man with the avowed aim of ­having the BJP rule from “panchayat to Parliament”, Shah has built up his party into a formidable machine after he took charge in July 2014. The Northeast, Odisha, West Bengal, Kerala...there’s nothing ad-hoc about the expansionist drive. The campaign trail reflects the Modi-Shah synergy. The latter convinces the PM on ­holding more rallies in states where the BJP’s prospects are weak. Before every rally, he briefs the PM about the constituency and gives him talking points. “He’s usually correct as his analysis is based on solid ground ­reports, not just surveys. Shah isn’t ­sitting in his AC office playing with data. He’s out there in the field, interacting with the rank and file, meeting people across sections,” says a party general secretary.

The party also helped in outreach. In the run-up to GST, Shah was in touch with all BJP CMs to ensure smooth implementation. Party cadres ‘spread awareness’ about how it would clear away a lot of cobwebs that hold back Indian economy. Even with DeMo, it was the party that carried the narrative on how the corrupt had been made to suffer, giving a compensatory story to the common man. That conduit role also came to the fore with welfare schemes. Party workers not only spread the word on the ground, but took feedback. In the run-up to elections, they identified the beneficiaries and won them over to the BJP. Modi was the hologram in outer space, Shah was the last mile connectivity.