Opposition unity is all fine. It may take a mammoth mood and vote swing to fell the man at the helm and the BJP. 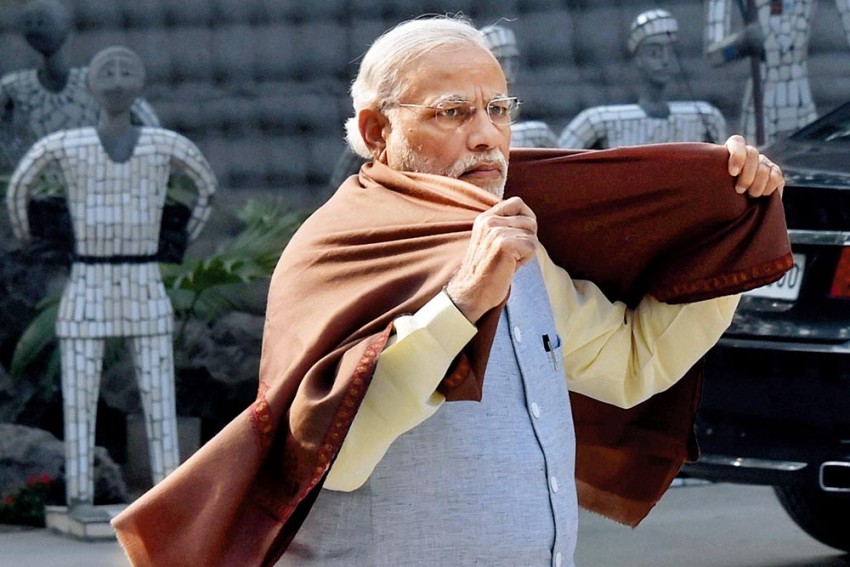 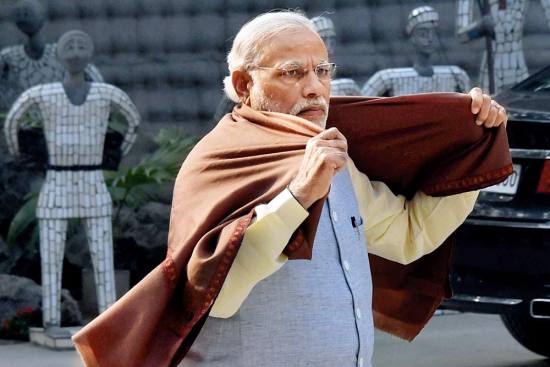 Can Narendra Modi be defeated in the 2019 Lok Sabha elections? Two answers are being offered to this question, both opposed to each other. The first answer is, it is almost impossible to defeat Modi in 2019, as surveys suggest his popularity still remains high, the BJP government’s performance is evaluated positively and finally there is no viable alternative to his leadership among opposition parties. The counter-narrative is, yes Modi would be defeated in 2019 as he has failed to deliver what he had promised, farmers across the country are unhappy, the youth disenchanted due to the government’s failure to create jobs and there are signs of unhappiness among several sections of voters. This argument is being strengthened by citing the verdict of 2004. It is being argued that if a popular prime minister like Atal Behari Vajpayee and his government could be defeated by a weak Congress and fragmented opposition in 2004, why can’t Modi, an equally popular prime minister running a well-liked government, be defeated?

No political party and leader can claim to be invincible, and that applies to Modi and the ruling BJP as well. But in order to defeat a popular government, either the opposition needs to emerge stronger than the ruling party, or if no single party in opposition is strong enough to defeat the ruling party alone, some of the opposition parties need to come together. The current political situation is far from any of the two possible scenarios. The Congress doesn’t seem to have emerged stronger than the BJP, and the opposition parties haven’t managed to form any alliance against the BJP. Such a political scenario makes me believe that it is extremely difficult to defeat Modi in 2019. The Congress certainly can’t defeat Modi alone; only alliances between some opposition parties can pose a challenge for Modi, though not enough to bring down the BJP below 200 seats. Even with the best coordination among political parties in forming an anti-BJP alliance, they can’t restrict the BJP from emerging as the single-largest party next year. 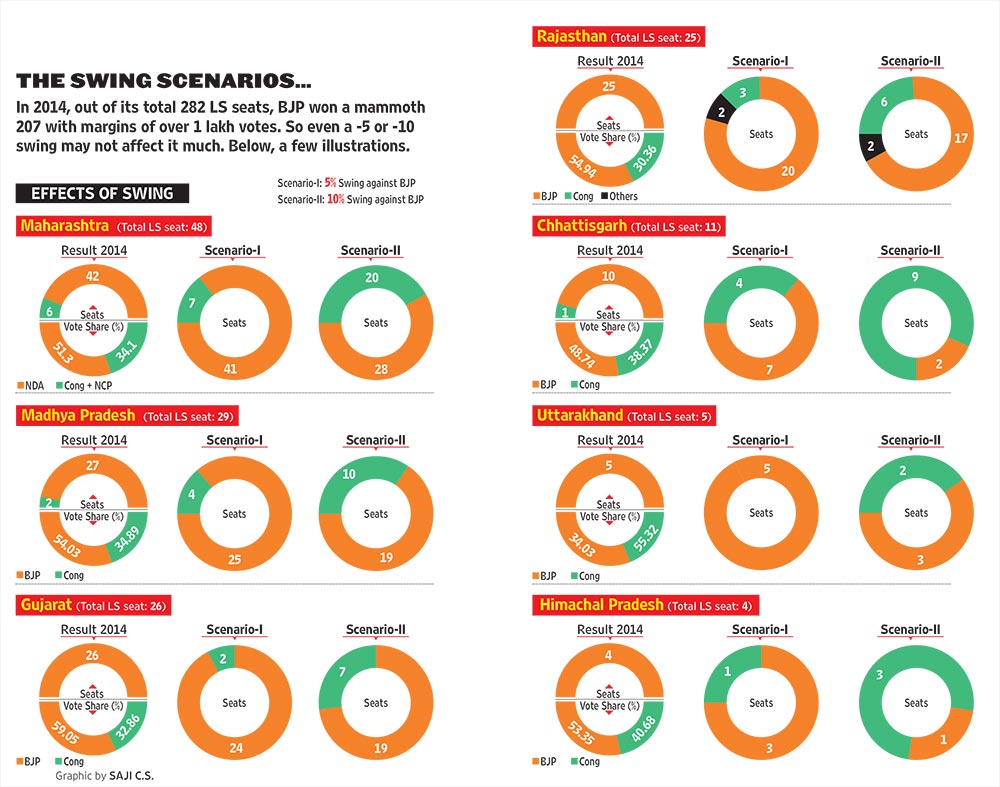 Let me first offer a macro explanation (nat­ional) and then move towards the micro (state wise). During the 2014 Lok Sabha elections, the BJP registered victories with big margins in many constituencies. The BJP can lose many of the seats they won in 2014 only if there is a big negative swing against it. The BJP won 42 Lok Sabha seats by a margin of more than 3,00,000 votes, and another 75 Lok Sabha seats by a margin of more than 2,00,000 votes.  Other victories have also been with sizeable votes. In another 38 Lok Sabha seats, the BJP won by 1,50,000 votes and in 52 seats, the BJP defeated its rival by a little more than 1,00,00 vote. It is not easy for the opposition parties to cover this margin unless there is widespread anger against the BJP.

Let us look at different electoral contests in 2019 and analyse how the BJP might perform in 2019? It is widely believed that the BJP might suffer big losses in the states that witnessed bipolar contests in the Hindi heartland, as the party had already peaked in 2014. It is true that the BJP cannot improve upon its performance of 2014 in these states, but contrary to popular belief, the BJP may not suffer big losses in states such as Gujarat, Chhattisgarh, Rajasthan, Himachal Pradesh, Madhya Pradesh and Uttarakhand unless something dramatic happens. The Congress would have to generate a massive swing against the BJP in order to inc­rease its vote share in a bipolar contest. Even a five to six per cent swing against the BJP may not affect the electoral prospects of the ruling party in many of these states, and the Congress may not find it easy to shift these votes from the BJP towards it. The wide gap in vote share between the BJP and the Congress makes it extremely difficult for the Congress to push the BJP onto the back foot in these states. Clearly, no single party, say the Congress, is in a position to challenge the BJP. While this is what the scenario looks like at the moment, the results of this year’s assembly elections might have an impact on how the people’s mood changes. If the Congress manages to snatch a few states from the BJP, it could emerge as a bigger challenger in the bipolar contest. But if the Congress fails, its task would be extremely difficult. 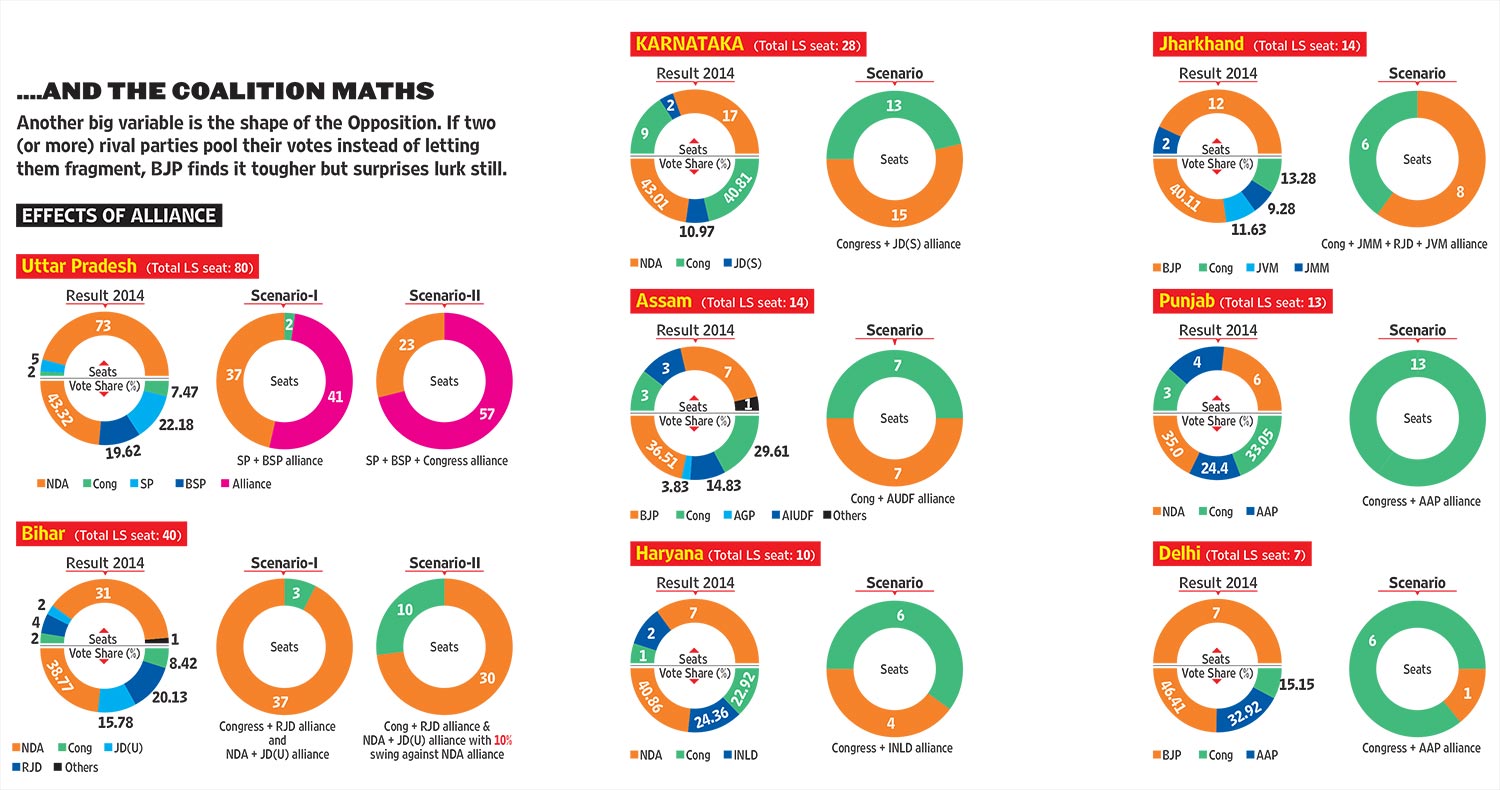 The second question is, can an alliance of ­regional parties push the BJP on the back foot? There are states such as Uttar Pradesh, Bihar, Maharashtra, Haryana, Jharkhand, Punjab and Jammu and Kashmir and Delhi where the BJP performed well in the 2014 Lok Sabha elections. It either managed to form an alliance with one or two regional parties of the state, or various reg­ional parties remained divided against the BJP. The BJP benefited from the division of anti-BJP votes. It is true that an alliance of opposition parties can push the BJP onto the backfoot in many of these states—UP, Delhi, Punjab, Jhar­kh­and, Haryana, Maharashtra and in a few others—exc­ept Bihar where the opposition alliance can’t damage the prospects of the BJP/NDA. But the big question is: where is the alliance? Can reg­io­nal parties having ambitious leaders form a common front against the BJP? The current pol­itical scenario with a divided opposition indicates the opposition may find it difficult to push the BJP even in these states. The only way by which the BJP could be pushed onto the backfoot is by an alliance of the opposition, the possibility of which remains weak at the moment. Of course, an actual mahagathbandhan, if it materialises, does hold the potential to change scenarios. But so many imponderables are attached to such a course of events—including mutual animus bet­ween partners—that some of the effects level out.

There are states like West Bengal and Odisha where the BJP did not perform well in 2014, but has the potential to emerge strong in 2019 if the contest remains the way it was in 2014, meaning the opposition remains divided. From surveys conducted over the past couple of years, there are enough indications of the BJP gaining in these states of late. If the opposition fails to form an alliance or understanding in these two states, the BJP can make big inroads in West Bengal in case the state witnesses a four-cornered contest (Trinmool Congress, Left, Congress and BJP). Odisha also, in case the state witnesses a three-cornered contest between Biju Janata Dal, Congress and BJP. Since the BJP won only two seats in West Bengal and one in Odisha in 2014, it could only gain in these two states, and there is no possibility of losing compared to 2014.

It leaves us with a few more states, mainly in the south, such as Kerala, Tamil Nadu, Andhra Pradesh and Telangana where the BJP’s presence remains more or less as it was in 2014, except in Kerala where it seems to have expanded its support base, but not enough to win Lok Sabha seats. So, in these states the BJP may not gain compared to 2014, but unlikely to suffer any losses either.

All these ultimately means, it is extremely difficult, almost impossible, to defeat Modi in 2019 given the existing political climate, the Congress’s inability to rise from where it was in 2014, the opposition’s failure to forge an anti-BJP alliance and absence of a leader who in the people’s perception is just as strong as Modi, if not more so. Given this scenario, Modi is a certain winner in 2019—without a doubt, unless something dramatic happens in the next few months.

(Sanjay Kumar is a professor and ­director, Centre for the Study of Developing Societies, Delhi. The views expressed are personal.)