Mob On The Job

Maximum City has been on a short fuse lately. It doesn't bode well. 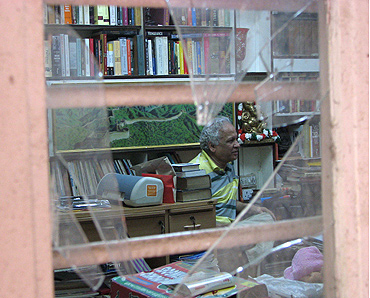 A History Of Violence

Words or brute force? Argument or assault? Rule of law or vigilante justice? A functioning democracy wouldn't even have to debate the options, but Mumbaikars have come to such a pass in recent months that even these issues are being "hotly deliberated over". Reason: the city has been witness to sudden spells of sporadic violence and physical outbursts, and over a number of issues. At one time, muscle power was the fief of the Shiv Sena but now other political parties/groups have learnt the vocabulary. Ad guru Alyque Padamsee, a long-time resident of Mumbai, is agitated by it all. "Democracy has been replaced by mobocracy, all political parties are resorting to street-side terrorism. It's shocking to see this level of goondagiri in Mumbai but it's true," he says. 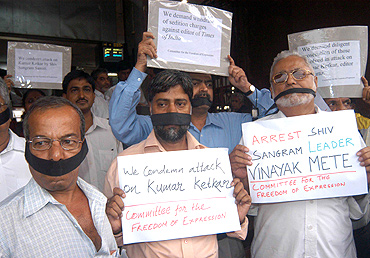 The attack on Loksatta editor Kumar Ketkar's house last week was hardly an isolated incident. It happened on the back of crude bombs going off in two suburban auditoriums in Vashi and Thane showing a Marathi play, Amchi Pachpute, which has uncharitable references to north Indians in the city. There have been scattered episodes of aggrieved groups, led by small-time political leaders of all persuasions, assaulting and blackening faces of teachers and principals in various schools and colleges for alleged inappropriate acts. And who hasn't seen those TV shots of enraged Raj Thackeray supporters going berserk beating up taxi drivers, bhelpuriwallahs and all those they perceived as "outsiders". Guns may not have come out and it's not the Wild West just yet but many of the attacks were murderous, and point to a growing culture of intolerance and physical violence in the city.

This 'culture', an inevitable corollary of rapid and unsustainable urbanisation, has more takers today than ever before. Arguing out a position, going to the courts for redressal, in fact, using dissent constructively, it all seems to be almost old-fashioned. People prefer, indeed want to take the law into their own hands. Ex-chief secretary D.M. Sukhtankar, now vice-chairman of AGNI (Association for Good Governance and Networking in India), points out: "People are often misled into doing violent acts...and they believe they have done an act of bravery." Adds social activist Asghar Ali Engineer: "What happened with Ketkar was neither for Shivaji nor for Maharashtra; it catered to vested interests of a few political parties. The trend is on the rise because votebanks are important."

Vinayak Mete, state vice-president of the NCP and an elected MLC, is still unapologetic over the attack. "I agree with the sentiment of my men," he stated. Early on June 5, about 60 activists from the Shiv Sangram Sangathan, led by Mete, broke windowpanes of Ketkar's ground floor home in Thane, attempted to break down the main door and tarred the door. With Mete's blessings, they were protesting a Loksatta editorial of June 4, in which Ketkar had panned the state's decision to construct a giant Rs 200-crore Chhatrapati Shivaji memorial in the Arabian Sea. Mete said the editorial in the Marathi daily was "derogatory of Maharashtra's aaraadhya daivat (venerated deity) Shivaji Maharaj".

Civil liberties activists and other progressives called for immediate action against the culprits. Only then did the Thane police register an fir and name Mete an "absconder". Indeed he was, attending a state-level party meeting in south Mumbai, seated next to colleague and state home minister R.R. Patil.

Hosbet Suresh, a former judge of the Bombay HC, is an aggrieved man. "Groups like this resort to violence at the drop of a hat these days. Such people are encouraged for electoral gains by those in powerful positions...so they know nothing will happen to them," he says. The sentiment is echoed by actor-activist Rahul Bose, "The repeated physical attacks show an open and naked collapse of the state administration...when people see that the government is fearful of applying the rule of law, it's open season for all elements who believe in violence."

Indeed, Mete's words and actions would have made Shiv Sena chief Bal Thackeray proud, for no one in Mumbai has used violence more as a synonym for protest. The "Sena method" had become legend in the '60s and was carried forward through the intervening decades into the '90s, reaching a crescendo during the December '92-January '93 riots. The party received much flak but was hardly penalised. In fact, it came to power in '95. Ironically, the same year it launched an attack on Loksatta for an editorial that criticised the Thackerays. Writer and historian Aroon Tikekar, then editor, received some 50 calls from and on behalf of the Thackerays threatening him with dire consequences. "It was a professional hazard in Maharashtra," he says, "That intolerance is growing and others seemed to have picked up lessons, that you can silence dissent by violent and sometimes over-dramatic means."

Ironically, Sanjay Raut, editor of Sena newspaper Saamna and Rajya Sabha MP, condemned the attack on Ketkar citing "freedom of expression"! Then why does Sena still swear by violent attacks? "The Sena has resorted to violence only when there were personal attacks against Balasaheb. Understand that a leader has a huge fan following; and when he is targeted it's impossible to stop the followers from reacting," Raut says. This presumably includes torching buses near Shivaji Park to protest the alleged desecration of a Masaheb (Balasaheb's wife) statue, besides forcibly 'changing' the 'Bombay' in names of schools and museums to 'Mumbai'. In an election year, every party wants to display allegiance to Shivaji; violence, they believe, is the only tribute to the warrior king. Any issue is good enough to bring out the lathis and stones, if not the guns.

By Smruti Koppikar with Snigdha Hasan