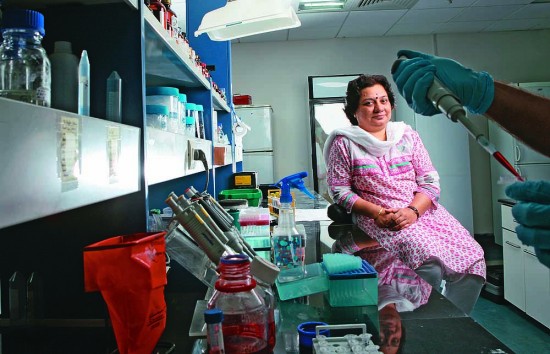 “A discovery is an accident meeting a prepared mind,” the Hungarian-American biochemist Albert Szent-Gyorgyi had once said. We ask Dr Mitali Mukerji about her pathbreaking discovery—that the ethnically and linguistically diverse Indian population was united by distinct DNA patterns—which led to the development of genomics-based treatments, including some drawing from ayurveda. Was it an accident? She laughs.

“Not really, but when I began my research, I had never imagined that it would be in this area,” she says. Dr Mukerji also takes pains to point out she is uncomfortable with getting credit for research that was the result of team work. “And I am thankful entirely to my mentor Dr Brahmachari,” she says. Born in Madhya Pradesh to Bengali parents, Dr Mukherjee speaks fluent Bengali and occasionally visits her relatives in Calcutta. Now a senior scientist with the Institute of Genomics and Integrative Biology, she looks after the Indian Genome Variation Consortium in Delhi. She has also shown how genomic data could be used for dissecting disease genes, identifying signatures of natural selection and tracing mutational histories. Presently, she is concentrating her efforts at integrating genomics with the principles of ayurveda—creating Ayurgenomics.