After Amstelveen and Kuala Lumpur, these Men in Blue too are aiming high Updates 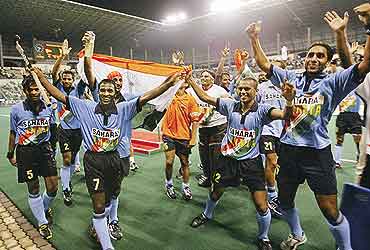 outlookindia.com
-0001-11-30T00:00:00+0553
If Jugraj Singh and Devesh Chauhan were the stars of India's campaign at the Champions Trophy in Amstelveen, Sandeep Michael and Ignace Tirkey stood out at the Asia Cup in Kuala Lumpur. Ignace, rather low-key in Holland, led the Adivasi trio—Dilip Tirkey and Bimal Lakra are other two—and they could well be the core of future Indian teams. Add to these the flashy Gagan Ajit Singh, speedy Prabhjot Singh, mercurial veteran Dhanraj Pillay, and of course, the dependable Devesh Chauhan under the bar. Even as other teams like Pakistan, Germany and Australia are still scouting for the right mix of youth and experience, India may well have found the perfect combination for the Olympic qualifiers in Madrid next March, and even for the Athens Olympics. This Indian team, more than any other before them in recent memory, can bring India its first Olympic hockey medal since 1980. They have it all—consistency, perhaps, being the only missing ingredient. The maiden Asia Cup title also carried India into the 2006 World Cup to be held in Monchengladbach, Germany.

If only Jugraj can make a comeback—though it's difficult to see that happen in a hurry, at least before the Olympic qualifiers—the Indians will be the team to watch out for in 2004. The absence of a drag-flick expert like Jugraj was obvious in Kuala Lumpur, but as it always happens, this handicap brought out the best in some others in the team like Dilip Tirkey, who handled the penalty corners well.

Coach Rajinder Singh too seemed to have learnt from his mistakes in Amstelveen. He was quite hesitant about using rolling substitutions in Champions Trophy. In KL, he used his bench strength very effectively and this kept the team fairly fresh even in the closing stages of a match—an Indian team scoring twice in the last two minutes of an important match like the final of a tournament is indeed a rarity.

On his arrival from Kuala Lumpur, Singh stressed the need to stay focused for the Madrid qualifiers, and the Olympics later. "I am happy that within about a year I have brought about improvements in many areas, like goalkeeping, short corner conversions, and even goal-scoring abilities and re-tackling. But we still need to improve a lot to win an Olympic gold medal," he said.

Sounds pompous, but with the Asian gold medal in his bag, he is entitled to that moment. But so are the players. There are times when one gets the impression that Singh's upset the players are getting more attention than him. That he sulks when the players are in demand. Even in Amstelveen, he would often sit and have meals with other officials and leave the players to themselves at the hotel.

But after returning from KL, he may have paved the way for a new idea, of open trials. One does not know how the Indian Hockey Federation will take it, but his call for open trials for full-backs and other key functions like drag-flicks etc does seem a good idea.

Coming to the Asia Cup, the defeat in the league match against Pakistan had dampened the spirits back home. But once South Korea was humbled, visions of a title and a revenge win over Pakistan were raised once again. In the final, India took the lead first—through Kanwaldeep Singh in the fifth minute—but surrendered the advantage after two quick strikes by Pakistan's Sohail Abbas. Dilip Tirkey, that unsung hero in the defence, got the equaliser in the 15th minute of a charged-up first half with a direct hit from India's third penalty corner. Goalkeeper Devesh Chauhan played a wonderful game and as usual blocked a number of goal-bound shots, including Sohail Abbas's shot in Pakistan's fourth penalty corner. Ignace Tirkey, the star of the tournament, and Prabhjot Singh, often prodigal and guilty of missing easy chances, scored in the last two minutes for India to make it 4-2.

In a few years time, when Indian hockey could display a rosier health than what it is in now, 2003 could be considered the year when it all started again. It's a trifle too early to say "the resurrection" has begun. But the truth is Indian hockey hasn't had a year like this for a long time. What started as a trickle in the form of a title at the Invitational Tournament in Australia maintained a level of consistency—albeit in the face of some not-so-strong opposition—at Hamburg, and the Champions Trophy showed, though in patches, that this team is capable of displaying the finest brand of hockey. While an event like the Champions Trophy is the real test at the world level, Asian hockey is hardly a walkover.

As for Pakistan, their main problem areas turned out to be their forwards—not only did they get nervous, but also seemed to be overcome by a superstition that in every tournament where the two teams clashed twice, both won once each. Since Pakistan had won the league game, the fear of losing the final seemed to have played a role in the match. It turned out to be a self-fulfilling prophecy. South Korea may have come third in the Asia Cup, but they remain a major threat. Midfielder Lee Jung-Seong is a great scorer and coach Jeon Jae-Hong maintained that their long-term target was the Olympics, for which they have already qualified as Asian Games champions.

But, for now, the moment belongs to the Indians. Their win marked the fifth victory against Pakistan in nine matches since the 2002 Champions Trophy in Cologne. Pakistan have won thrice, and one match in Australia ended in a draw.

The Cup win also rekindled memories of India's win over Pakistan in the '75 World Cup final, the only time India has won hockey's greatest prize. And neither has India got onto an Olympic podium since a depleted 1980 Moscow games. Rajinder should remember that occasion. Maybe he can inspire them to do it once more.