I learn from this book, to my huge disappointment, that Nadia didn't always do her own stunts 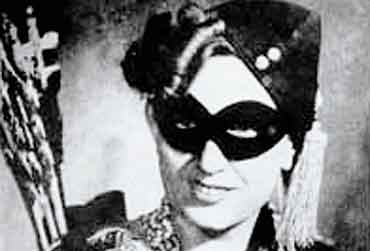 NADIA—The True Story Of Bollywood`s Original Stunt Queen
By Dorothee Wenner (tr from German By Rebecca Morrison)
Penguin Pages: 272; Rs 295
I fell in love with Fearless Nadia when I was four. On a Sunday evening, my father drove the family to town in Fiji to see Bambaiwali in a tin shed that functioned as a cinema hall. After all these years I still remember it was a Sunday. Nadia had that kind of effect on me.

My father was more inclined towards Devika Rani. But I was absolutely enthralled by this blue-eyed blonde in shorts, high leather boots and a mask. She carried a whip, could ride a horse and swing from chandeliers. She ran on top of moving trains in films with titles like Miss Frontier Mail and Hurricane Hansa. She was also fat but how did that matter to a four-year-old?

Over the years, Nadia has been forgotten—she died in 1996, nearly 90—and it has taken a foreigner to write this book. That’s okay. Nadia’s father was an impoverished Welshman and her mother Greek. Her real name was Mary Evans.

Parsis played a big role in the early days of Indian cinema. The Wadia brothers concentrated on making stunt films. They stole plots, sometimes even footage from Hollywood serials. Nadia made three films with them before Hunterwali (1935) made her a star.

Wadia Movietone’s publicity emphasised that Nadia did her own stunts. Now I learn from this book, to my huge disappointment, that this wasn’t so. The more risky scenes were shot with a man in a blonde wig. I also didn’t know she had a child out of wedlock when she was a teenager and before she married Homi, the younger Wadia brother. Nadia made over 40 films, her last (Khiladi) in 1968.

The best story I heard about Nadia is not in this book. Nadia’s pronunciation of Hindi was atrocious. They were shooting a scene in which she was struggling with the villain. The dialogue given to her was simple. All she had to say was ‘mujhe chhodo (let me go)’. She could not understand why the crew laughed hysterically every time she uttered the words.