The western media's duplicity isn't lost on the Arabs. 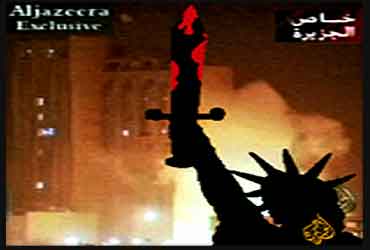 The slogan has been echoing inside me ever since I heard it the first time. As someone only weeks old in this part of the world and without the slightest knowledge of Arabic, it was remarkable that the chants reverberating through Arab streets, professing unflinching support to the beleaguered Saddam Hussein, would etch such an instant impression. Strangely, it did.

It continues to awe me. Not because I am a votary of the Iraqi president, nor because I have finally made sense of what the slogan means. It's primarily because of the unparalleled passion and the raw rage that are fuelling the chant in its rapid sweep through cities and deserts of the region.

Arab rage is just among the many things that I have discovered since I arrived in Doha in the run-up to the war. Neither am I reporting from the battlefront, nor have I been 'embedded' for a guided tour of the ongoing bloodbath under way some 100 miles away. Yet, here I am face to face with a whole new perspective of the war that had for so long remained hidden and elusive. I am witnessing the war as everyone else is perhaps back home in India, piggy-riding the likes of cnn, Fox, et al. Except, suddenly I have access in large measure to the Arab viewpoint that the world is seemingly so ignorant about.

It's advantageous to live in the city where the Central Command of the US military has its headquarters. But a far greater help has been my new stint as a journalist with Al Jazeera. The Arabic satellite television channel has in the past week kicked up as much heat and dust as has the actual war. For its no-holds-barred reportage, mirroring the war in all its gore, the channel has been in the news as much as Baghdad or Basra have been. We have been attacked and vilified. Our websites have been hacked and wiped off the net. We seemed to be under siege.

But the offensive against Al Jazeera stinks, just as the unfair and unjust war does. And I am as much outraged on seeing our website being hacked and paralysed as ordinary residents of Baghdad would expectedly be these days. Both have been sacrileges.

True, Al Jazeera prefers to describe the US-led war as an "invasion". But so do almost all the Iraqis I routinely run into here. None of them has any particular fancy for Saddam and wouldn't really have regretted had any tragedies befallen him under normal circumstances. But these are abnormal times and though the war is apparently being fought to earn them their freedom, they all remarkably seem to have closed ranks behind the despot they loved to hate till only the other day.

Unifying them in their opposition to the war is the immorality of the war, the suspicion of US motives and the inherent double standards that's currently on show. The heavily biased coverage of the war in the western media and the targeting of Al Jazeera could only have stiffened the Arab feelings. The region is more or less convinced that the west—Bush, Blair and the media included—is conspiring against them.

One particular Iraqi friend of mine showcases the prevailing mood the best. Genial and soft-spoken, he's enraged the moment western television channels start parroting their lines, charting significant "advancements" of the US-led forces. His pride hurt, he regains composure only when the customary references are made to fierce Iraqi resistance. "See friend, Iraqis are standing up," he presses my hands tightly, gesturing he has found some peace at least within the overwhelming despair.

AL Jazeera has also been standing up in a similar way—in putting the record straight. So long as television channels broadcast images of captured Iraqi soldiers being forced to kneel down and body-searched, it was OK with the world.But near mayhem broke out the moment Al Jazeera telecast images of some captured British troops being interviewed. The inherent duplicity hasn't been lost on the Arabs.

It's perhaps only from my vantage position in Doha that I could have seen through the duplicity and double standards and, to be honest, I am seeing them by the dozen, day after day, as the war unfolds.

A man is ordinarily presumed to be alive unless proven dead. But in Saddam's case, the western media has presumed him to be dead unless proven alive—ever since US military officials craftily floated news of his death in the very first rush of missile strikes. In its aftermath, they still qualify Saddam's recent speeches as either "reported" or "claimed" to have been made by him.

Appalled by the brazenly partisan coverage, a friend here has altogether stopped watching television. I am watching it more to catalogue the endless spins. From claims of a premature victory in Umm Qasr to the discovery of a chemical factory in Najaf and the non-existent "mass uprising" in Basra, this war has genuinely been littered with them.

Though not rage, I have distinct disgust welling up inside me. From it hopefully springs the urge to swim against the tide and let one's voice be heard. Al Jazeera has precisely been doing that and I seem to have landed up at the correct address.

(The author is a senior journalist with Al Jazeera in Doha)