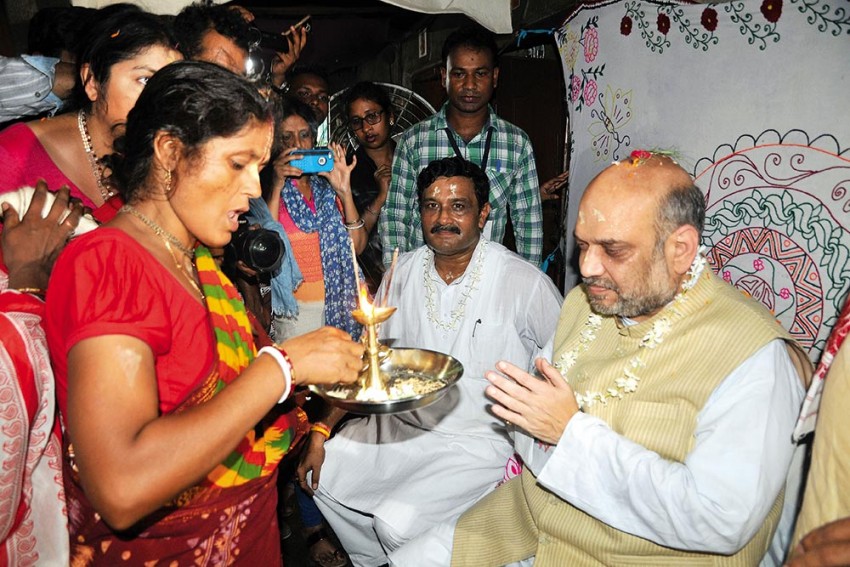 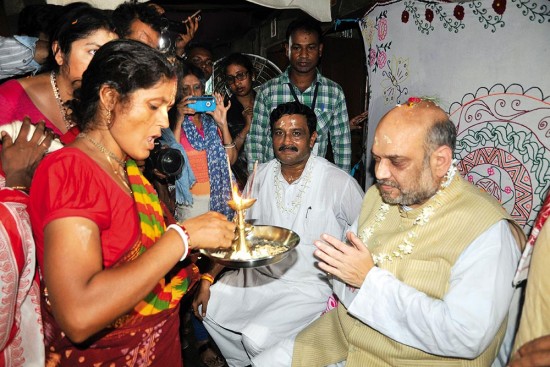 In its onward electoral romp thr­ough north India in the past four years, the BJP was reduced to a bit player in only one politically significant state—West Bengal. It is, avowedly, one of the final frontiers for the party, and its leaders and cadre are working sedulously to increase their once insignificant footprint in the state. The modus operandi is a mix of the expected and the unusual.

“In my life as a voter in Bengal I have never seen so much emphasis on religious issues as now,” says Pujari Das, a Calcutta construction worker in his 50s, who hails from Murshidabad district’s Domkol, which is one of the seven West Bengal municipalities to go to the polls between May 14 and  19. Das, who claims never to have missed the opportunity to exercise his franchise, will go back as usual to cast his vote. But he finds it extremely ‘suspicious’ that the BJP has fielded eight Muslim candidates in his constituency. “Domkol is, of course, a predominantly Muslim area (over 80 per cent of the population), but it seems that this move, from a ‘pro-Hindu’ party, is an attempt at playing up the religious divide. As a Hindu of that area, this is the first time that I am in a dilemma about who to vote for.”

Das drives home an interesting point—as far as West Bengal is concerned, playing the ‘communal card’ in a textbook manner is fraught with difficulties and is something unique to Bengal, a state which has since independence—first under the Congress and then, for 34 years, the Left Front—distanced itself from ‘religious politics’. The political culture of the state, for all their ruinous dross, had bred a fierce allegiance to ‘secularism’.

It is, therefore, interesting how an expansive BJP, as part of its aggressive drive across India, is trying to establish itself in West Bengal. It is in this context that Amit Shah’s recent, high-profile visit to Bengal as an avatar of ‘development’ just before the polls in the nondescript municipalities becomes significant. Equally noteworthy is the manner in which the party supported the celebration of Ram Navami—a festival har­dly ever observed in Bengal—in April: huge processions, festooned with Hindu iconography and pictures of Lord Rama, and bristling with swords and spears that most participants brandished—wound their way through several Bengal towns.

“It must be remembered that Bengal was one of the few states in which there was no ‘Modi wave’ in the 2014 parliamentary elections, when Mamata Ban­erjee’s Trinamool Congress won 34 of the 42 seats. The figures clearly indicated that it had overcome anti-incumbency and other obstacles, like the Saradha chit fund scam. But what it really showed is Bengal’s emphatic rejection of communalism,” points out political commentator Tarun Ganguly. This was further corroborated when the BJP failed to capture more than three seats in the 2016 Assembly elections, which the TMC swept again, winning 211 of the 294 seats. The demons it put to rest were again anti-incumbency and another major scandal, the Narada controversy, in which sting operation tapes showed Trinamool leaders allegedly accepting bribes. The BJP’s focus on these issues of corruption during the pre-election campaign (its Bengal in-charge Siddharth Nath Singh’s slogans of ‘Bhaag, Mamata, Bhaag’, for instance, referred to the Saradha chit fund scam) consumed a lot of airtime and newsprint, but scarcely influenced voters.

A BJP leader tells Outlook, “Yes, we recognise the difficulties in Bengal.  But our primary focus is to highlight development issues and the benefits of having the same party both at the Centre and the state. We are working hard to shake off the communal tag.... We are confident that by the next state elections we would establish ourselves firmly in the soil of Bengal.” 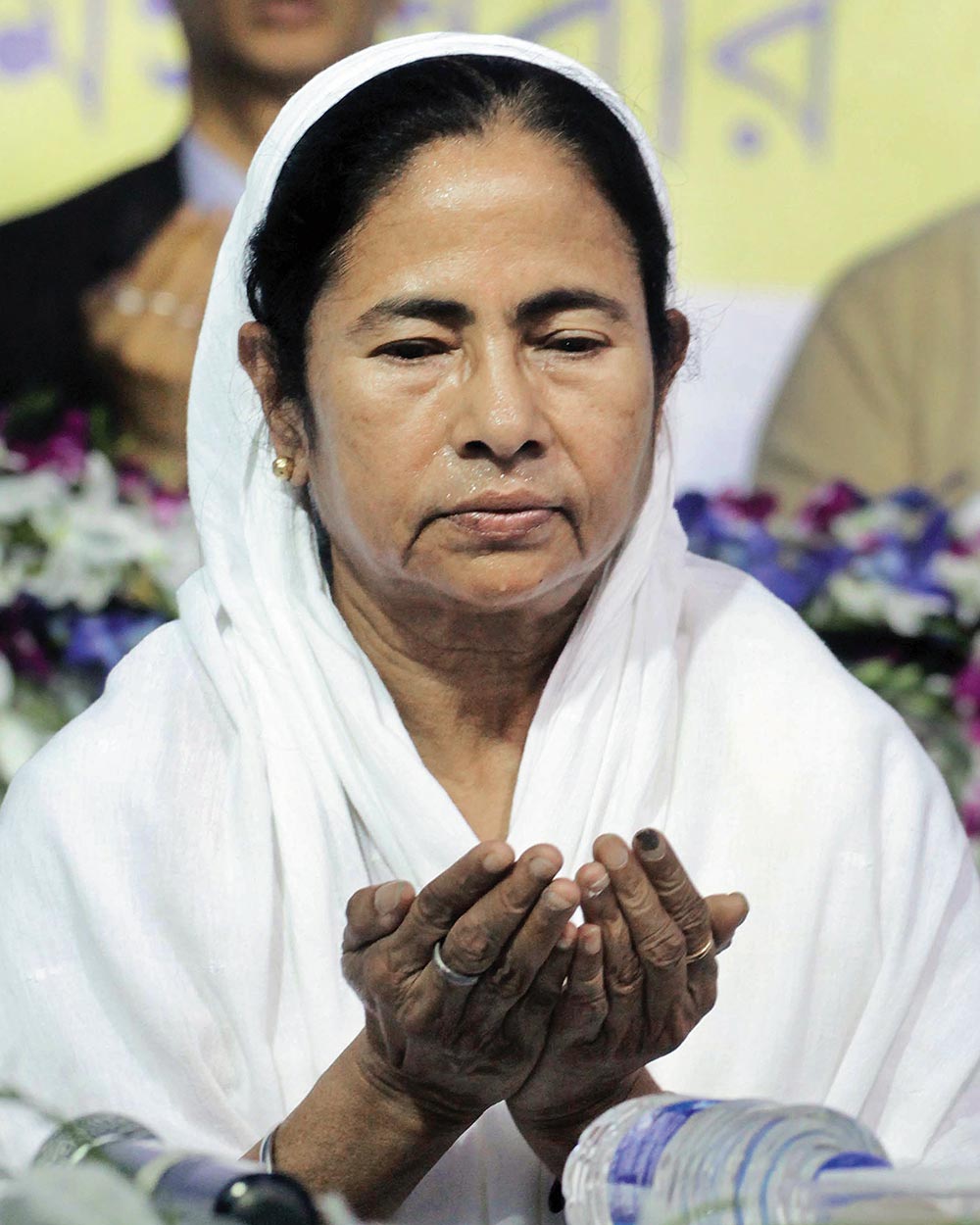 Mamata at an Iftar party

Indeed, after its setbacks in Bengal, a shift in the BJP’s strategy is evident not only in Amit Shah’s descent on the state prior to a minor election, but his visits to the humble homes and huts of poor folk—Mamata’s largest constituency. In the house of Raju Mahali, a tribal man of Dakkshin Katiajote in Naxalbari, which will go to the polls in the mid-May elections, Shah said that that the BJP’s entry into Bengal would be a revolution different from the uprising in 1967—one that would herald an age of ‘development’. From North Bengal, Shah swooped down closer home—his next stop was the slums in Bhowmanipur, the constituency from where the Bengal Chief Minister had contested the elections.

But if, as a political commentator observes, “the BJP’s lotus blooms best in an atmosphere conducive to communalism”, for instance in Uttar Pradesh, will the party really be able to “get the maximum number of seats in West Bengal in 2019”, as Amit Shah so confidently predicted? Can promises of development alone achieve the ambitious target?

The BJP is importing ploys from Manipur and Assam into Bengal, like defection of top leaders.

Whatever BJP leaders say, political experts are convinced that “the communalisation of Bengal” is already afoot, and that the BJP is not the only one to blame.

“Let us not forget that the term ‘communal’ is not limited to any particular religion but applies equally to appeasement of religious communities in order to divide them,” CPI(M) MP Mohammed Salim tells Outlook. Calling Mamata’s populist, minority-friendly measures such as offering doles (Rs 2,500 monthly stipends for Imams, for instance), and eye-catching gestures such as donning a burkha, doing namaaz and observing ramzaan as “gimmicks”, he claims that the community can see through these ‘tricks’. Though his colleague Gautam Deb, a trenchant critic of Mamata’s politics, has recently dropped hints that the Left was not above joining Trinamool to prevent a BJP incursion, Salim puts the Trinamool and the BJP in the same, ‘communal’ category. Salim isn’t entirely wrong—there are reports that Mamata’s cosseting of Bengal’s Muslims (at 30 per cent of the populace, a crucial votebank) is creating misgivings, something that is being quietly worked upon by the BJP, and showing in its increasing voteshare at the expense of the hapless Left.

Congress leader Om Prakash Mishra also blames Mamata, pointing her role in bringing BJP to Bengal when she had tied up with the party in the late 1990s.

Most significantly, in the past two years, the BJP is emerging as the TMC’s main political rival in Bengal. With the Congress a non-entity and the beleagured Left yet to rally back from a decimation in ranks, morale and strategy, the BJP—with the sheen of Modi and the perception of being ‘upwardly mobile’ in tune with the zeitgeist ruling the rest of the country—has insinuated itself into Bengal’s political consciousness.

Though both the BJP and TMC pay lip service to ‘development’, they are not above ‘catering to communal sentiments’. Whether the target population would be taken in is another matter. Bengal’s Muslims almost certainly won’t vote for the BJP, in spite of its fielding candidates from the community. “We know what happened in Gujarat,” says Fatima Bibi, a slum dweller in Calcutta, adding that she is happy with Mamata’s populism, like rice at only Rs 2 a kilo. Afsar Ahmed, a carpenter, not only supports it but sees in Mamata’s stipends for Imams a “concern for the development of the community”.

Keenly aware of the challenge, and far from considering three MLAs as a disadvantage, the BJP sees it as a strong improvement from 2011, when it did not have a single seat in the assembly. “Three is a good number...indicative of slow and steady growth,” BJP leader Chandra Kumar Bose, who had contested against Mamata in the Assembly polls last year tells Outlook. “Plus, don’t forget our vote share has gone up by leaps and bounds. It is only a matter of time before this translates into number of seats.”

In its bid for Bengal the BJP is thinking of importing the winning strategies that had worked in eastern states such as Assam and Manipur. If in Assam the BJP succeeded in getting the influential leader Hemanta Biswa to defect, in Bengal many read the constant pressure on top Trinamool leaders with threats of CBI action (in various scams) as a ploy to get them to switch sides. A powerful minister who featured in the Narada tapes, was said to have been approached by the party for this purpose too. And like in Manipur, repeated visits by Shah to build a ground base is being followed in Bengal.

Over and above the time-tested strategy of fielding celebrity candidates for  assembly and parliamentary elections, such as musician Babul Supriyo (now a Central minister), act­ress Roopa Ganguly (now a Rajya Sabha MP), magician P.C. Sorcar and musician Bappi Lahiri, the party is now concentrating on the real job of building the foundation—winning more ‘grassroots’ polls like municipal and panchayat elections—that would itself lead to greater prizes.

If the BJP makes incremental gains in elections like the one this month, gathering up the gains and shoring up more support for the next lightweight bout, the 2019 fight will be toug­her for Mamata. In the meantime, both parties are trying a balancing act—‘development’ and ‘com­­m­unalism’ are but two sides of their UNI­que calling card.

No Escape From This Slave Trade