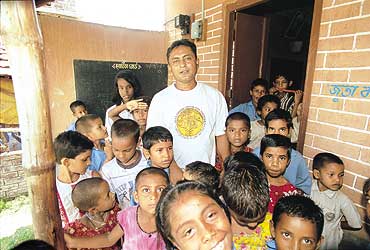 outlookindia.com
-0001-11-30T00:00:00+0553
There are two things the village of Matia Bazar, in the North 24 Parganas district of West Bengal, is known for. One is its large, weekly market. The other is its 150-year-old red-light area. When Ambia Hossain was growing up in the village, he often saw the traders and the children of sex workers cross each other’s path in strange, sometimes heart-rending, ways. The children, running wild and underfed, would steal fruit and other eats on market day, get caught and be beaten up by the vendors. Hossain’s heart always went out to them. "Many of them were unwanted, uncared for," he says. "They had to fend for and feed themselves. Their best hope was to get some schooling."

Marshalling his meagre resources a few years ago, Ambia set about putting up a coaching centre for the kids—but only after spending six months convincing their mothers to educate them, and repeatedly appealing to the local panchayat for funds. "I could tell that the sex workers were happy with the idea of schooling, but they were wary of us outsiders," he recalls. He found unlikely support in Swapna Chakraborty, a sex worker with considerable leadership qualities. Chakraborty rounded up the kids, and helped Hossain and his band of do-gooders set up the centre in an abandoned cattleshed. In 1996, in its first year, the school had 103 kids, between the ages of four and nine.

Ambia’s limited resources have, however, only allowed him to have a preparatory "school" for the kids. While the centre prepares the kids for government schools, it also prepares them for some of life’s challenges. "These are kids we’ve had to wean away from a world of drug pushers, pimps and criminals," says Zul Kalam, a teacher. "Other non-formal coaching centres would be happy if they could read a little or sign their name. But we want to encourage them to read the newspaper, learn some basic finance management and foster their creativity." Today, more than 85 youngsters have been admitted to the neighbouring government school. But much to Hossain’s chagrin, there’s still a high drop-out rate among them. "The taunts and humiliation by the other children at the schools, and sometimes even the teachers, will probably never end," says Hossain. "But at least the kids are no longer stealing food."

Hossain’s organisation, the Basirhat Subdivision Environment and Health Development Centre (BEHDC), has now moved onto other areas. Matia Bazar has, of late, turned into a major hub for the trafficking of women and kids. This is facilitated, not just by its proximity to Bangladesh (the border is just 18 km away), but also by the area’s backwardness, where farming and small-scale business are a halting, unrealiable source of livelihood. It has become an easy hunting ground for traffickers. A few years ago, Hossain noticed his village was flooded with recruitment "agents" offering jobs in Delhi and Mumbai as domestic help.

At the same time, Ambia noticed that many of his wards were disappearing, allegedly married off to suitors from Uttar Pradesh, Madhya Pradesh and Haryana. BEHDC’s other area of work has been to stop this trafficking. In 2002, Hossain formed the Network for Anti-Trafficking (NAT), which now works in 32 villages in the four major blocks of Basirhat. And leading the charge is a group of vigilant teenagers who have vowed to stop their friends from being spirited away. They write plays and musicals to raise awareness about the problem and conduct door-to-door campaigns against minors being married. "Theatre and music are effective tools of awareness that Hossain has been able to involve the kids in," says Atindranath Das, deputy general manager of development support with cry, which part-funds BEHDC.

Backward Basirhat may be low down on the development curve, but its youngsters are taking large steps towards a better life. Hossain can be contacted at: BEHDC, Village and P. O. Matia, Via Dhanyakuri, North 24 Parganas District, West Bengal-743437. Phone: 03217-275001.

Not In The Zone Yet