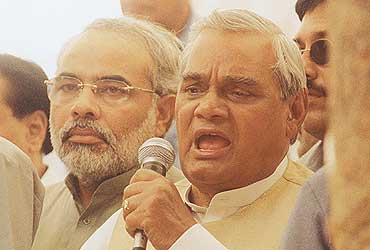 outlookindia.com
-0001-11-30T00:00:00+0553
On his long-overdue visit to the riot-torn, traumatised state of Gujarat, Prime Minister A.B. Vajpayee took care to project himself as statesman, poet and humanitarian, a veritable picture of emotional distress. But as the day wore on, full of gut-wrenching tales of horror, it became clear that expectations of swift and stern justice against an erring administration were to be belied. Glued to the PM’s elbow all through the visit was Gujarat chief minister Narendra Modi: the face of fear for minorities all over the country.

The PM adhered faithfully to a well-planned script, alternately making passionate pleas for peace and talking tough. He was deeply ashamed, desperately hurt and firmly resolved to bring evil-doers to justice, he said. He rapped Modi sharply on the knuckles: "CM ke liye ek message hai, ki woh raj dharma ka paalan kare (there is one message for the CM and that is, he should follow the raj dharma).... By raj dharma I mean there should be no difference between caste and caste, between religion and religion...." But he had ruled out a change of CM earlier, saying "Sambhavana nahin hai (it’s not likely)."

In Delhi, Modi’s votaries breathed a sigh of relief. Sacking him had become a tad difficult after BJP president Jana Krishnamurthy’s uncompromising defence of Modi, who he felt had been maligned by both the media and the Opposition. "It’s easy to criticise a house someone else has built," he said, taking recourse to a Tamil proverb to stress that Modi had done the best he could. The status quo would be maintained, he added.

However, a section of the BJP—not including the PM—believes Modi should seek a popular mandate, a trial by ballot box being preferable to a trial by media. When Modi visited Delhi last week, he brought with him several copies of an opinion poll by a well-known agency, indicating that the party was likely to get a two-thirds majority were elections held in May or June this year, than in February or March next year. Widely circulated in party circles, it helped create a pro-election lobby, which bought Modi’s argument that the Godhra massacre had succeeded in creating a communal polarisation in the state.

Most members of the PM’s delegation, comprising several cabinet ministers, justified Modi’s continuance by saying his removal would worsen the law and order situation. Explained one: "There is no strong alternative leader. Why add groupism and infighting to the state’s other problems?" Another minister added that a snap poll in Gujarat was undesirable; if communal polarisation hadn’t helped the party in 1993, it was unlikely to work now.

In fact, Modi’s unpopularity at the Muslim relief camps—where slogans of "murdabad" were raised—is rationalised as a polarisation of votes rather than a personal attack on Modi. Says Arun Jaitley: "After we left Shah Alam, our driver told us to roll down the windows. And we heard cries of ‘Narendra Modi zindabad’." By that time, the delegation had reached the other relief camp, which housed victims from the majority community.

The PM’s political managers have tried to deflect attention from Modi to the crucial task of rehabilitating victims. The visit was thus carefully packaged as the PM’s healing embrace of Gujarat and its frightened minorities. It was on this aspect that both the PM and L.K. Advani concentrated during Modi’s visit to the capital. And it was here, say party sources, that Modi was found wanting.

When the PM (Advani had a sore throat and was scribbling his queries) asked the Gujarat CM about what he was doing regarding the rebuilding of houses for riot victims, Modi reportedly hinted he didn’t see the need to do any such thing.Says a BJP minister: "Modi believed that unlike the earthquake which was a natural disaster, this was something the riot victims had brought upon themselves by their own (mis)behaviour." A stunned PM is believed to have asked him, "Then how will life return to normal?" The meeting ended with the PM warning: "Modiji, yeh khai bahut gehri hai, isko taapna hoga (this divide is too deep, you’ll have to leap across it)."

Small wonder then that the few moments of discomfort Modi experienced during the PM’s visit were at the relief camps. The inmates of the Shah Alam camp made it clear they were terrified of going back to their old neighbourhoods. Said one, Shahana Begum: "How can I live in the colony where betis and bahus were stripped and raped?" Added Shafi Ayoob Mullani, camp organiser, "Last week, the CM asked us how many inmates there were. He suggested sending some back to Naroda Patiya (from where they had escaped) but we refused, despite his offer of protection."

The lack of faith in Modi and his government was summed up by Congress MLA Bharat Solanki, who pointedly told the PM: "Today, there were no major incidents in Gujarat. Maybe you should stay here." Not impervious to the jibe, the PM tried to laugh it off. But just a day later, fresh incidents of violence were reported; one person was killed.

The crowds at Shah Alam jeered Modi even as Jaitley reassured the CM and minister of state in the PMO Vijay Goel asked camp organisers to "do something". Warned by the SPG that Modi would not be welcome, the state government had quietly asked the camp organisers to control the crowds—a fact revealed by the plea to inmates, "Please, we asked you last night not to do this (heckle the CM)." In fact, minutes before the PM arrived, camp officials could be heard instructing their flock: "Islam discourages rude behaviour towards a guest. This is your house and Modi is a guest. So control yourselves." But when the PM himself said he was "ashamed and embarrassed" by what they went through, the crowd couldn’t hold back.

The PM consciously tried to win over the minorities by projecting himself as the soul of moderation. The man who had once annoyed Gujarat’s minorities by asking for a "national debate on conversions" ruled out a commission to probe assaults on the majority community. In fact, when asked, he looked aghast: "Do you really want me to reply to that question? The majority community needs no protection. It is capable of safeguarding its interests. They have numbers on their side." Of course, this statement necessitated a balancing act, so Godhra was a last-minute addition to his itinerary. He also wiped tears and waxed poetic at the VHP-run relief camp for Hindus in Kankoria. And he pointedly ruled out a CBI enquiry into the riots, as demanded by the NHRC. He preferred to wait for the Shah Commission’s findings and added, "The central government will help (the inquiry) if the state government asks for it."

The PM’s chiding of Modi hasn’t satisfied his detractors in the BJP, both moderates and hardliners, who want him replaced expeditiously by a non-controversial figure like textiles minister Kanshiram Rana. Even the party’s Hindu votebase, they believe, had no stomach for the kind of anti-minority violence Gujarat saw in the wake of the Godhra incident. Besides, the sustained breakdown of law and order in the state was affecting business, an affront to the industrious Gujarati community. Corporate groups are believed to have already complained to the PM about the unending violence.

In a meeting of top BJP leaders last week, health minister C.P. Thakur and former Gujarat CM Keshubhai Patel gave heart-rending accounts of conditions in the state, hinting that Modi should go for the party’s sake. To dissolve the assembly and opt for elections on the premise that Godhra had polarised votes in favour of the party would come across as a cynical political calculation which would be counter-productive in the rest of the country.

The parivar, not just the BJP, is divided on the Modi issue. A standard-bearer of Hindutva for some, Modi has become a "kalank (black mark)" for others. "Everyone is talking about the communal angle. What about sheer administrative incompetence?" asks a BJP Rajya Sabha MP, pointing out that the party has sacked CMs for far lesser lapses. Another senior BJP leader questions: "There is no explanation forthcoming for the Godhra incident. The CM has yet to explain what the railway and state police were doing for two hours while the kar sevaks burned." If Godhra had not happened, nor would the subsequent riots and for that alone, Modi ought to be sacked, he adds.

On the eve of the PM’s visit, Thakur and Patel visited the relief camps in Gujarat and returned with a dismal report, a far cry from Modi’s own praise for his administrative mechanism. At the Shah Alam relief camp, the PM observed that "officials have to do their duty and politicians have to fulfill their responsibilities". Despite the gentle reprimand, from Modi’s point of view, the PM’s visit was "extremely satisfactory".

What has aided the pro-Modi faction, led by Jaitley, is the fact that there have been no strident demands for his ouster from within the NDA. The Opposition, while it has said he should quit, is husbanding its ammunition till Parliament resumes next fortnight.

The NDA has taken its cue from the TDP, condemning the Gujarat government but stopping short of asking for Modi’s head. Andhra CM Chandrababu Naidu isn’t inclined to reveal his cards just yet. "We still have to sit down and discuss the whole issue before formulating a stand on it. I don’t want to react piecemeal to such things," he told Outlook. The NHRC’s indictment of Modi is making the TDP nervous, as was evident in Naidu’s assurance to his partymen that he’d ask the PM to deal firmly with the Ayodhya and Gujarat issues.

Observes a TDP MP: "How can one CM ask for the dismissal of another?" Besides, the AP government has been at the receiving end of NHRC far too often to give much weight to its report. But doubts were raised at a recent AP cabinet meeting over the TDP’s continuing liaison with the BJP at the risk of damaging its secular image. To which Lal Jan Bashah, MP and TDP general-secretary, said: "We are only supporting the NDA government from the outside, so how can we be blamed for anything it does or doesn’t do?"

With sporadic incidents of violence in Gujarat still continuing, the last word on Modi is yet to be heard. A final decision on Gujarat may well have to await the BJP’s national executive in Goa, from April 12 to 14, following which major changes in the party and the government are expected. It is not known if Modi will be censured in Goa. But as of now, his chief ministership seems to be under no threat.