Minions Of The Metro Machine

Without them our lives will fall apart. Yet, many homes treat pets better than domestic workers. 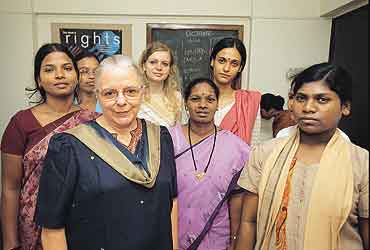 outlookindia.com
-0001-11-30T00:00:00+0553
The first thing you notice about 14-year-old Rose Kisku is the angry gash above her brow. And then the thick black welts on her arms and wrists. Her back too is criss-crossed with purple scars. These are the marks of a koyta (a kitchen implement used to break coconuts) used against this young adivasi from Bihar, working as a domestic help with a well-to-do family in Mumbai’s Nerul suburb. Her crime? She didn’t cook dinner on time.

The wounds are healing but the memory is raw. "Memsaab just picked up the koyta and kept hitting me. I was bleeding all over but she wouldn’t stop," recalls Rose. A day before this, the memsaab locked her out on a rainy night because she failed to find the chocolates she was sent out to buy.

Rose, fortunately, was rescued. Disturbed by the girl’s screams, a neighbour contacted the National Domestic Workers’ Movement (NDWM) office in the city. She was taken away to their shelter. For the young migrant from Bihar’s Chhota Durgapur, it was the end of two years of abject serfdom. Two years of working without getting a penny. Of living in a house where pets were treated better.

"People feel they are doing domestic workers a favour by taking them on. But the truth is that they work in conditions of maximum exploitation," says Jeanne Devos, a Belgian nun who came to India 40 years ago and founded the NGO in Mumbai in ’85. "Their work has no dignity and they have no justice. It is literally a form of slavery."

In a country with over 14 million domestic workers, the NDWM is the only organisation fighting for their rights. Over the years, its network has spread to 12 states spanning Chhattisgarh, Bihar, Andhra Pradesh and Kerala and has over 1.5 lakh active members. Most of its leading activists are domestic workers themselves, who help in spreading awareness among co-workers about protecting themselves from abuse. Each state has a coordinator. Though run by a nun, NDWM is completely independent of the church.

The movement seeks to empower the ‘invisible’ workers by lobbying for their legal rights. "Domestic work is not legally recognised as labour. So the workers have no legal protection, no minimum wage and cannot organise as unions," says Devos. The NDWM has filed a pil in the Supreme Court demanding that domestic work be recognised as a form of unorganised labour.

Initially, it was difficult to reach the workers in the face of opposition from employers. But the group got around this by meeting them during their chores outside the house. "You feel bolder when you come out and meet others in the same situation," says Jayanti Lakda, a former domestic help who is now an ndmw activist.

Rose’s example, though extreme, is not an isolated case. There are even instances where domestic workers have been battered to death. And, though rarely reported, sexual abuse too is common. Then there are forms of discrimination so ingrained that they hardly get noticed. Though they cook the meals, they only eat the leftovers. Most spend their nights in roach-infested kitchens or staircases.