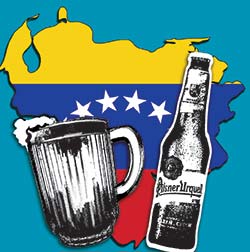 This week we learnt about beer crisis

We all know that Venezuela is in a financial mess. But its citizens are now suffering a strange emergency of epic proportions. The country’s largest brewer Empresas Polar supplies 80 per cent of the beer drunk in Venezuela, including the leading brand Polar Pilsen. It has stopped production, citing the absence of malted barley. President Nicolas Maduro has now threatened to take over the closed breweries, saying that the business owners risk being “put in handcuffs”. It doesn’t help that Venezuelans really like their beer. The tropical country has the highest per ­capita consumption rates among the nations in South America. Some things are worth fighting for!