Can Ganguly rebuild the team he built? His first hurdle is Ganguly the batsman. 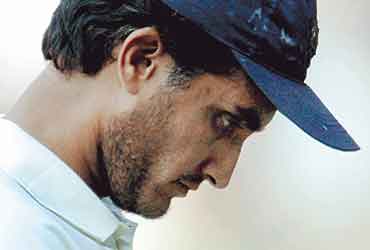 outlookindia.com
-0001-11-30T00:00:00+0553
One reason why the Indian cricket team's captaincy is the most difficult job in sport is that a very large percentage of this country's very large population considers itself better equipped to handle it than the incumbent. This tribe fell on bad days when Saurav Chandidas Ganguly first walked out to toss with Bangladesh's Naimur Rehman on November 10, 2000. The way Ganguly transformed a rudderless and drifting team into one that defied the odds has forced admiration out of even his fiercest rivals and critics—among them Steve Waugh and John Buchanan—for his grit, determination and man management.

Which is why it was tragic to see him linger on after losing his wicket to Shahid Afridi on the fifth afternoon of the Bangalore Test. Until umpire Simon Taufel, at the second attempt, succeeded in conveying that the ball had shattered the stumps without any extraneous help, Ganguly was a picture straight out of a Greek tragedy. It wasn't obstinacy that made him hang on—in competitive sport, that would count as a virtue—merely a hopeless wish that reality would go away.

"I didn't know what happened," he said after the match. Perhaps, he still doesn't. There, along with shattered timber, lay the reputation of a batsman once marked for greatness, if only he could touch up his game just a little, as every international batsman must do every year. An effective pull or a duck under the rising ball without taking the eyes off could have done the trick.

Don Bradman, who was a better batsman than captain, says in Art of Cricket that a great captain does not have to be his team's finest player. Some of the best captains of the modern era were great, yet not the best. They also suffered slumps. Mark Taylor was in such wretched form before the England tour in 1997 that a man from the Daily Mirror tried, unsuccessfully, to present him with a three-foot-wide Duck Bat.

Nevertheless, great captains—Clive Lloyd, Allan Border, Steve Waugh—have had this ability to deliver that crucial knock, when the chips have been down, to lift their team and change the shape of a contest as well as those that followed. (Taylor got a century in the first Test of that Ashes series and Australia retained the urn.)

Ganguly can lay claim to only one genuine series-turning knock as captain, a breathtaking 144 off 196 balls at Brisbane in the first Test of the 2003-04 tour to Australia, when underdogs India silenced the "chin music" to emerge the better of the two teams. That was one of only two man-of-the-match performances by Ganguly the captain, the other an unbeaten 98 to win the second Test in Sri Lanka at Kandy in 2001. For the rest, he has generally flown with the tide, rising (such as a brilliant 128 at Headingley in 2002 when Dravid and Tendulkar too got hundreds) and receding (as in Bangalore).

In fact, even during the captain's finest hours, the batsman's form and fitness have stuck out like sore thumbs. Ganguly averaged 17.66 in the euphoric triumph over Australia in 2001, scored only 140 more runs in the remaining three Tests, after Brisbane, of the 2003-04 tour, and played only one Test in last year's triumph in Pakistan, scoring 77 in the only innings that India batted.

With a mere 48 runs at an average of 9.6 in the just-concluded Pakistan series and 580 runs in the last 18 innings at 32.22—take out the 71 and 88 in Bangladesh and the figures will look a lot worse—it is sad to see him ramble on that there is no real slump and the big one is just round the corner. About 100 days short of his 33rd birthday, an age when batsmen are considered to be in their prime, he can no longer deny that the opposition has sorted him out.

"On current form, he is not among the top six batsmen in India. He is playing because of his record as captain. We have to wait and see whether he is just having a bad run with the bat or if this is a genuine decline," says cricket historian Ramachandra Guha.

The problem is that the batsman is casting a shadow on the captain. When Ganguly walked out to bat in the second innings at Bangalore, the crowds started chanting Dinesh Kaarthick's name, an indication that they expected another wicket to fall any time. By now, the Indian team is accepted to be taking the field with only 10 players and a captain. Bangalore was significant for another reason. It marked the low point in a regressive journey downhill from the peak of the Pakistan tour last year and back to the days when Team India was often found groping for a spine.

It was shocking to see players of the calibre of Tendulkar surrounded by an umbrella of as many as six fielders, besides the wicketkeeper, when the opposition had only two Test-class bowlers, Sami and Kaneria, plus maverick Afridi. As Kumble proved, there was a boundary to be had every time the ball pierced the cordon. A few of those could have scattered the field and put pressure back on Pakistan since four an over had been common throughout the series.

In Pakistan's second innings, the fielders were so spread out that Inzamam had to shade his eyes to spot them, and Tendulkar and Kumble bowled a constantly negative line from round the wicket.

Unfortunately for the captain, his rubbing of the lamp is no longer producing the genie like it did in the form of Laxman at Eden Gardens four years ago. Even Brearley, considered the most cerebral of 'non-playing' captains, had a couple of those at his disposal in the varied shapes of Ian Botham and Bob Willis who, under Brearley's leadership, took respectively 150 wickets at 19 apiece and 112 wickets at 24 apiece.

Can Ganguly rebuild the team that he built? His first obstacle is Ganguly the batsman, the weakest link in the line-up. To compound matters, the skipper has not been too successful of late in nurturing talent. His ploy to repeat his success with Sehwag by promoting Yuvraj Singh to open came a cropper, prompting former India player and selector Kirti Azad to insinuate that the move was merely meant to protect Ganguly's place in the side. Parthiv Patel played some useful knocks as batsman but failed miserably in his primary function. And his handling of Akash Chopra broke a very promising opening combination.

Geoff Boycott has said that Ganguly is very lucky since India are not scheduled to play any Test in the next six months. If they were, Ganguly would have presented a serious problem to the selectors, especially as Yuvraj's and Mohammad Kaif's knocks have been getting louder. The ensuing litany of one-dayers—a format in which, given the bowling and fielding restrictions, Ganguly is still one of the best—presents the captain with an opportunity to resurrect his career as a Test batsman which may decide his fate as captain. Kapil Dev has already called for handing the baton to Dravid, who debuted alongside Ganguly in Tests. As Bradman said further, "The man who is not sure of his position can scarcely have that freedom of mind which a captain needs." And, as of now, Captain Courageous appears to be losing the battle to Batsman Outrageous.