Beneath its discreet aesthetics and emotional tug lurks a rather cliched tale, the economy of expression not wishing away the underlying melodrama. 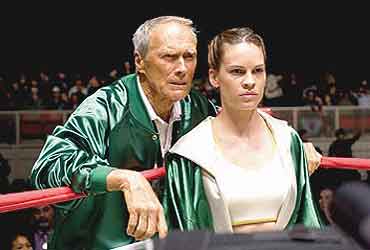 The best thing about Million Dollar Baby is the way it has been shot. The shadowy frames echo the grimy high-tension feel of a boxing ring. The straightforward, no-nonsense story-telling is pleasantly old-worldly. In fact, there is a uniformly measured stone to the film which makes it poignant.

But flip the coin and Million Dollar Baby can also prove to be disappointing. Beneath its discreet aesthetics and emotional tug lurks a rather cliched tale, the economy of expression not wishing away the underlying melodrama. Frankie (Eastwood) is a gruff old trainer who is devoted to his boxers but doesn't quite lead them on to the all-important titles. He runs a gym, Hit Pit, with the help of a one-time champ, Scrap (Freeman). Maggie (Swank) is a down-and-out but spunky waitress who wants to make it to the ring because boxing is the only thing she feels good doing: "It's about the magic of risking...