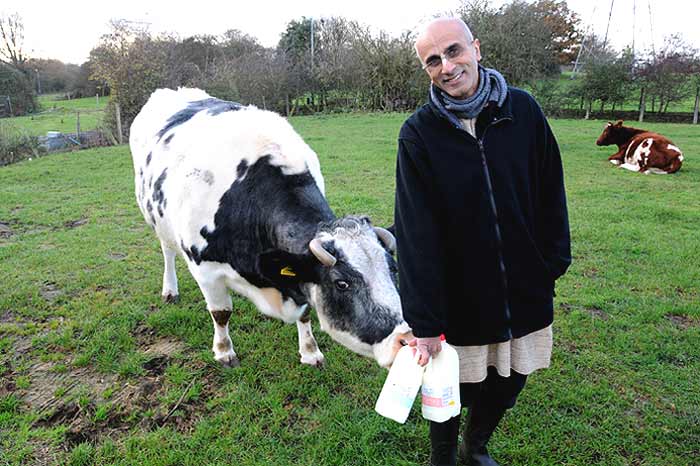 Travel north outside of London and you will have reached Bhaktivedanta Manor, the sprawling 17-acre Hertfordshire countryside estate that George Harrison purchased in 1973 for the followers of Lord Krishna. Home to the UK chapter of the International Society for Krishna Consciousness (ISKCON), the campus bustles with the collective hustle of both devotees and visitors to the Radha Krishna temple, occupying much of the ground floor of the Tudor-style building. But while the Bhaktivedanta Manor is famous for its colourful history, not as well-known is its reputation as a model for organic dairy—for its Ahimsa milk standard and the humane treatment of its cow herd.

I visit the Bhaktivedanta Manor a day after the 10th anniversary of Harrison’s death was commemorated on November 29. Garlands of marigold are still strewn about in the memorial garden. I saunter to the large barns that house the community’s 55-strong dairy herd.

On this beautiful late November morning, most of the cows are out grazing; two calves and a group of males are knee-deep in freshly deposited straw cushions. “We have set up the Ahimsa milk standard,” says Ahimsa Dairy Foundation director Sanjay Tanna (or Sitarama Das, as he is known amongst the Krishna devotees), referring not only to the farm’s fully organic products, but also its ‘no-slaughter policy’. Bull calves here are not sold to be killed at abattoirs, but stay and work for a living. This particular morning, four are engaged in pulling the ploughs on what is to become a potato field. On weekends and during festivals, there are bullock cart rides, very popular amongst children.

The cows provide around 40,000 litres of milk a year, a little less than 4,000 litres from each bovine, a third of what conventionally kept high-yield breeds produce. The Ahimsa cows are only inseminated every three or four years. In contrast, at mega dairies, a cow is routinely made to conceive as soon as it’s 13 months old and attains puberty. With a nine-month gestation period, she births her first calf when just two years old. Three months later, the cow is gotten pregnant again. At four, she’s sold off to be slaughtered and ends up as hamburger meat or dog chow. On the spaced-out insemination of Ahimsa cows, Tanna says, “They still give milk, it helps control the herd size and it is much easier on their bodies. People just don’t know under what conditions milk is normally produced. The Ahimsa milk project shows the dairy industry can be ethical.”

“Right now, we have 11 cows giving milk at Bhaktivedanta Manor,” he adds. They are milked twice daily by hand in a spotlessly clean parlour, with devotional music playing. They produce enough milk for the devotees, the children at the primary school on the estate and the cafe#, which serves masala chai, rasgullas and burfis. The project has another 12 cows, which are kept in line with Ahimsa milk standards within an organic herd on a farm in Kent, east of London. Since July, their milk is being supplied to about 100 families in north London, many of them Hindus. A litre of Ahimsa milk costs £2.25 (roughly Rs 180) in addition to delivery charges. A hefty price, admits Tanna, but “it includes a pension fund for the cows”. Seventy pence per litre goes towards the upkeep of the bulls and the retired cows. “Many of our Indian customers say our milk reminds them of home, where they got it directly from a farm,” says Tanna. Even chefs praise the quality of the milk. “The flavour is very complex and really stays with you,” says Sam Clark from the well-known Moro restaurant in London. “You can tell it would make a great cheese or yoghurt.” 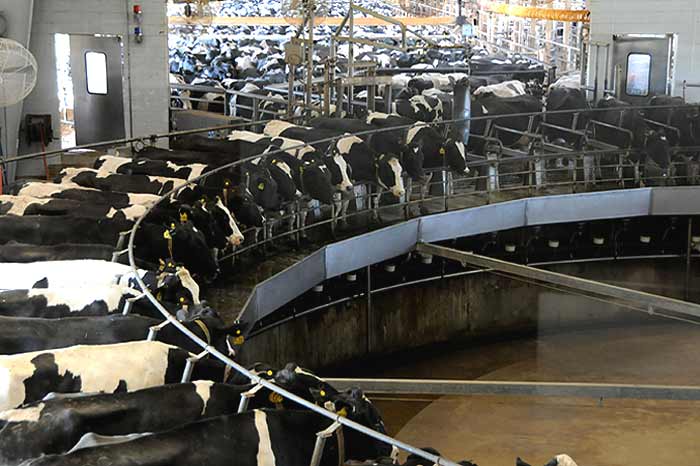 Sure enough, starting next year, Ahimsa soft cheese and paneer will enter the market and delivery of milk and ghee will be expanded to other parts of London. The herd in Kent is to expand to about 30 cows, and will be fed a grass diet with additional organic feed during the winter months. Tanna hopes that in time, Ahimsa milk projects will be set up all over Britain. “We want to educate people on the real story of milk production,” says Tanna, “and change their buying habits to organic until slaughter-free Ahimsa milk is available everywhere.”

That is the goal set by the Go Dharmic Campaign, which has opened stalls at 25 major Hindu festivals. Says Richard Green from the Organic Milk Suppliers Cooperative, “There was a lot of interest. They have more than 8,000 followers on Facebook by now.” The campaign couldn’t have come at a more propitious moment—the big players in the industry don’t just decry organic dairy as being backward, but are pushing for US style mega dairies in the UK. Several applications to this effect are pending.

To get an idea of how mega dairies tick, both advocates and critics have been travelling to Oak Farms in the US state of Indiana. Here, 32,000 cows, most of them black and white Holsteins, live in huge barns, each with a capacity to hold 3,000 heads. In batches of 350, they queue up to be milked thrice a day, their hind legs pressed apart by their enormous udders. On average, each cow gives around 37 litres of milk daily. The 10 milking carousels are run round the clock: 75 cows are milked simultaneously in 8.5 minutes—and that’s just with one turn of the carousel.

During their brief lives, the cows of Oak Farms don’t get to see a blade of grass nor feel a bed of straw under their bellies. They are kept indoors throughout the year, their feed consisting of a complex mix of corn silage, soya beans and additives like minerals. They lie on sand, which, the farm managers say, makes it easier to keep them clean. The calves—on average a 100 are born daily—are separated from their mothers within hours. The bull calves are sold immediately, to be fattened and slaughtered. The females will be artificially inseminated as soon as they reach puberty and they will join the queue at the milk carousel as soon as they give birth. On average, cows in mega dairies have two calves in quick succession, which exhausts their bodies. By four, they are deemed ready for the abattoir.

By contrast, it is not unusual for cows in an organic milk herd to be still productive even when they are well over 10 years old. At Bhaktivedanta Manor, a cow stops working at age 16 (if not earlier), which is about equal to 60 human years. In retirement, they are left to graze and enjoy themselves until they die a natural death, their passing mourned with flowers and even a little ceremony. George would have approved.