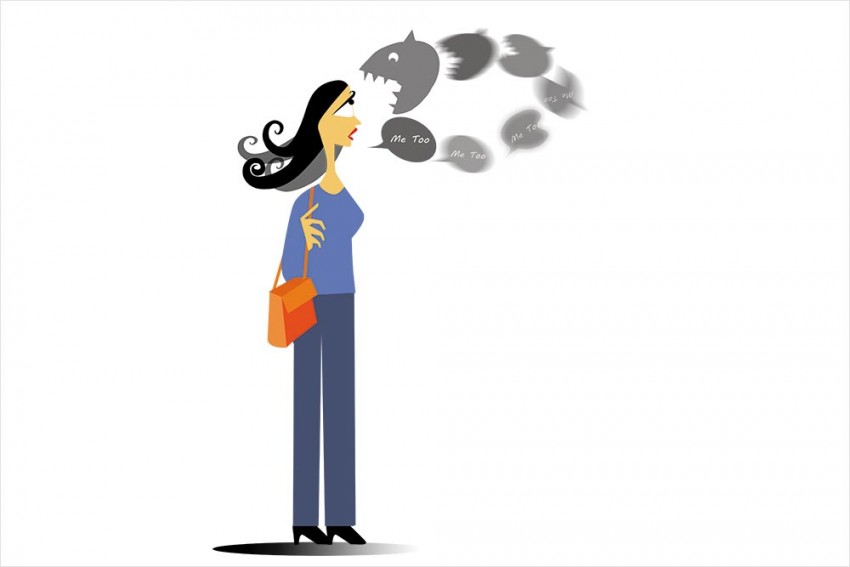 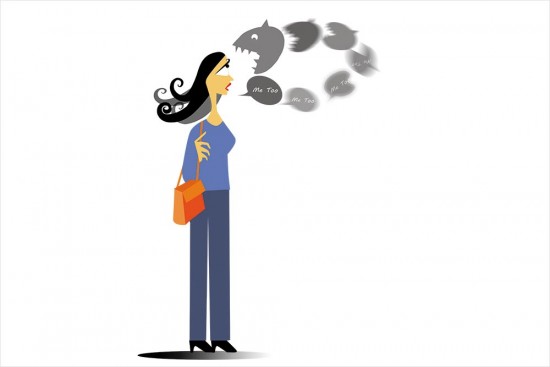 #MeToo may have come as a storm, in two distinct and momentous bursts that broke upon India, but it’s obviously not a simple “moment” that has passed, leaving everyone to cope with the next headline event. Something as complex as this stays in the bloodstream of society, changing behaviour, subtly altering the atmosphere, exerting its influence in various ways, not all of them savoury. Two months since a band of women spoke out against the inappropriate conduct of men, calling them out in public, often with evidence, there even seems to be a reverse wave—of silent reprisals.

It’s happening at several levels. Individual women are paying the price for speaking out, being labelled as ‘problem-makers’. And it has, unfortunately, set off a domino effect, even if not overtly, that may affect women in general. Many organisations are feeling wary about hiring women and are, informally, talking about scaling down women employees. This is beside the note of caution that has entered ­socialising between the genders in workplaces, as anecdotal evidence suggests. A movement to fight predatory male behaviour may thus actually also end up hurting women in ways.

All this, even as the truth-claim of women’s testimonies is made conditional to the court cases and internal investigations initiated by organisations. Says Poulomi Das, writer and editor at Arre, who had called out a fellow journalist: “The real test of how many ­publications sincerely want to make offices a safe place for women rests on how they deal with these men. And honestly, it doesn’t look that great. Because two months down the line, these men will be rehabilitated one way or the other.”

“The real test rests on how offices deal with these men. It doesn’t look great. They will all be rehabilitated in a month or two.”
Poulomi Das, Writer & Editor, Arre

Says Nandini Desai (name changed), who works with a PR firm: “We are truly feeling the fallout. I have an excellent boss who’s a great mentor too. But of late, he has started avoiding me and other women employees. We are not being given any plum ass­ignments because that involves travelling with male colleagues.”

Casual workplace conversations and light-hearted banter between genders too seems to have come to a grinding halt. Author and communication specialist Neelam Kumar says, “Now there is caution, formality and ­uneasiness, with men not sure whether ­normal friendship might get misconstrued and lead to a #MeToo allegation.”

Many male executives are now wary of having work dinners, work travel, work meetings with women alone. As much as its social side, this also has a professional fallout—­gender-distancing can also mean exclusion from boys’ clubs, and the grapevine that offers ­access to “inside stories”. Male bosses are leaving their doors open when they have a conversation with female colleagues, ­hesitating before shaking hands, wondering if it’s okay to invite women team members out for a team drink. Says Swati Bhatta­charya, chief marketing and communication officer with a leading Indian corporate, “One manager actually asked me to sit with him in his office because he needed to give feedback to a female member of his team, but was ­fearful of the consequences.”

So, the loss is two-fold: being locked out of the job market outright or being estranged from informal networks that are intrinsic to corporate success. The old male islands of imagined superiority and aloofness are back. A latent ­misogynistic culture already saw women as a ‘threat’, now the idea that they could pose a ‘possible problem’ is hardening attitudes.

Weighing the fallout, Nimisha Dua, a senior HR manager in Gurgaon, says: “Yes, workplace interaction has toned down quite a bit. Showing too much familiarity and friendliness is something men are being conscious about…I guess this is a knee-jerk reaction. But there’s no dramatic ­influence in terms of employment being scaled down for women.” She’s hopeful also because, for a lot of organisations, gender diversity is an important area of focus. (In certain countries, it’s essential to report your gender percentages.) But the internal atmosphere is critical here. As Paroma Roy Chowdhury, V-P, corporate communication and public affairs, SoftBank, says: “Protagonists should guard against trivialising #MeToo. Organisations should ensure inclusion and call out abusive behaviour. There’s zero cost in asking people to behave better.”

“There is ­caution, ­formality and uneasiness, with men ­fearing that friendship might lead to a #MeToo ­allegation.”
Neelam Kumar, Communication Expert & Author

Dua says this new caginess about workplace interaction and banter is “unwarranted”. If one goes through all the #MeToo stories, none of them is about a small, one-off ­incident—say a compliment like “you look good today”. Most are about openly brazen, even multiple incidents of harassment. Therefore, proper, credible internal inves­tigations and strict punitive action against both harassment and false complaints can only help. Bhattacharya strikes a balance: “I do ­believe #MeToo was much-needed…it’s high time women felt safe enough to come out with their harrowing stories. At the same time, I’ve seen some women jump onto the bandwagon for other reasons. I’m 100 per cent ­behind the real cases, but the others sadly trivialise the issue. That, more than ­anything else, is the cause of the backlash.”

Bhattacharya has an incident to relate. “A friend’s colleague was actually threatened with dire consequences if a woman was not given a promotion. Now, this undermines the movement,” she says. “But all said and done, it’s not something I would trade. It will take a while to normalise, but normalise it will. The overall outcome will be safer workplaces.”

A Washington Post report spoke of how #MeToo can hurt women in a way: given the male dominance on Wall Street, one ­imm­ediate consequence for women can be the loss of male mentors. Male bosses might fear that others may misinterpret their relationship with the junior women ­colleagues as sexual attraction.

The subtler dilemmas apart, good old ­mis­ogyny is alive—and kicking. Many South Indian film artistes who called out influential names are paying for it. Parvathy, the articulate (and outspoken) Malayalam/Hindi ­actress, has spoken of a drying up of roles. Playback singer Chinmayee Sripada minces no words, “I’ve been denied my right to work. It was a fallout of my speaking up. I’ve been cast out of the Dubbing Union in Chennai for calling out lyricist Vairamuthu.”

“Editors patiently wait to protect their own. A leading ­newspaper provided space to people who were called out.”
Divya Karthikeyan, Journalist

And Kannada actress Shruti Hariharan, who called out actor Arjun Sarja, confirms the pattern: “The after-effect of #MeToo is like, once you speak out, they’ll ensure you are victimised and slut-shamed.” Things went according to her premonition. “The superstars chose not to utter a word. The Karnataka Film Chamber called me and threatened that I shouldn’t utter a word against the industry.”

There’s hard work ahead, then, in challenging entrenched regressive attitudes, addressing the borderline panic among ‘innocent’ males, or ensuring closure via due process in cases where predators have been called out, rather than resuming ‘business as usual’ after everything has ‘died down’.

Some women feel #MeToo is another feather in the cap for the feminist movement in India. Abha Singh, former civil servant and an advocate practising in the Bombay High Court, says, “Some of the major contributions of the movement ­include the accelerated ­increase in awareness regarding sexual ­harassment laws. Predators now think twice ­before engaging in questionable conduct. Internal Complaints Committees are being set up in many agencies, though many ­political parties, including the Congress and BJP, are yet to act on this.” Women are not ­defenceless anymore. They are aware of their legal rights and have immense support in ­society and on social media. However, to bring the movement to its logical conclusion, more needs to be done.

“Unless we as a collective deny these men a platform, it’s going to be very tough. A leading newspaper providing space to people who were called out is an example of editors ­pat­iently waiting to protect their own,” says journalist Divya Karthikeyan. Kiran Manral, editor, SheThePeople, ventures: “I don’t think any woman underestimated the backlash she would face if she spoke out.” Journalist Ghazala Wahab, one of the figures in the eye of the storm, has the final word. “I think it’s too early to start writing obituaries,” she tells Outlook. “#MeToo is not a revolution, and ­nobody was ever under the illusion that the Indian workplace would change overnight.” 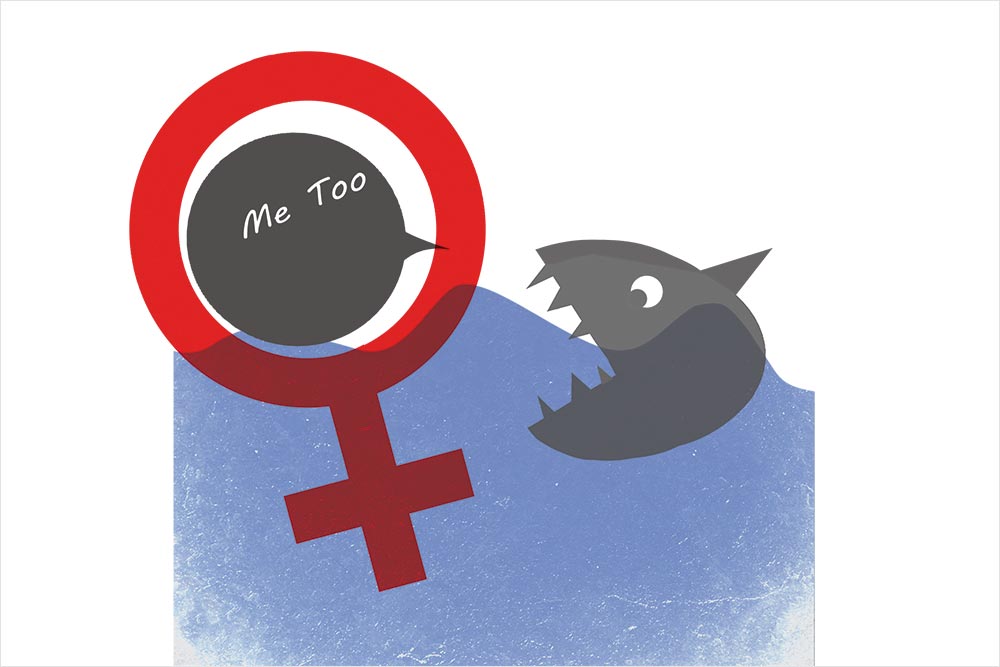 What Is To Be Done?