The process of ranking India’s best professional colleges began with extensive research to establish the criteria for selecting the master list of colleges. Only colleges with government accreditation or affiliation, and with at least three passed-out batches, were considered.

Then, detailed questionnaires were sent to more than 1,450 colleges across the country in eight streams—Engineering, Medicine, Architecture, Dentistry, Law, Social Work, Hotel Management and Mass Communication. Due to limited participation from fashion technology colleges in the last three years, it was decided not to send questionnaires to fashion institutes but to do only a perceptual survey. The questionnaires, which were also put on the Outlook and MDRA websites, measured colleges on five key parameters. In 2010, a panel of experts with reasonable experience in their respective fields was consulted thoroughly to decide the parameters and sub-parameters and their importance. The same parameters were followed this year.

In the final phase, an extensive audit was conducted. Almost 10–15 per cent of the colleges were visited by experienced auditors and field researchers. Final scores were calculated by adding perceptual and objective scores for all except the fashion technology stream, which was ranked only on the basis of the perceptual scores. Looking at the improved quality of engineering colleges participating this year, it was also decided to increase the ranking from 75 to 100. The MDRA research team included Abhishek Agrawal, Abnish Jha and Avanish Kumar.

Disclosure: MDRA is associated with the CMS Academy of Communication & Convergence Studies 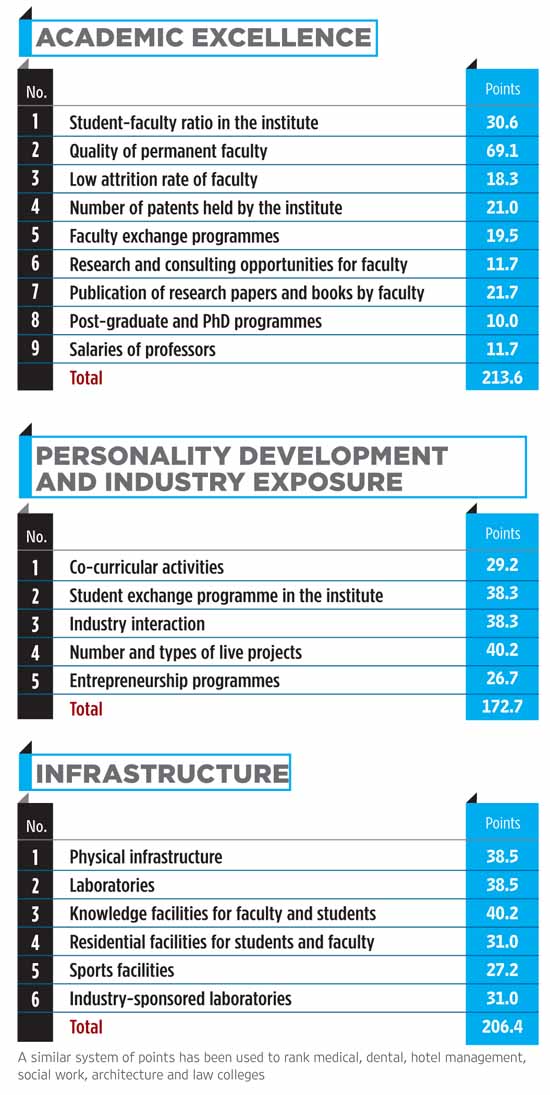