The process of ranking India’s best professional colleges began with extensive secondary research to establish the criteria for selecting the master list of colleges. Only those with government accreditation or affiliation and with at least three passed-out batches were considered. Then, detailed questionnaires were sent to over 1,400 colleges in nine streams: Engineering, Medicine, Dentistry, Social Work, Law, Hotel Management, Fashion Technology, Architecture and Mass Communication. The questionnaires, which were also put on the Outlook and MDRA websites, measured colleges on five key parameters. A panel of experts with reasonable experience in their fields was consulted in 2010 to decide the parameters and sub-parameters for ranking and their importance. The same parameters and weightages were followed this year. Repeated follow-ups were undertaken to get responses from colleges.

Given the quantum and quality of responses, seven streams—Engg, Medicine, Dentistry, Social Work, Law, Architecture and Hotel Management—were found fit for objective analysis and evaluated on a combination of objective and perceptual data (with equal weightage). Physical audits were done for 20 per cent of the colleges by MDRA and Outlook. For the other two fields—Fashion Technology and Mass Comm—a fully perceptual survey was done. 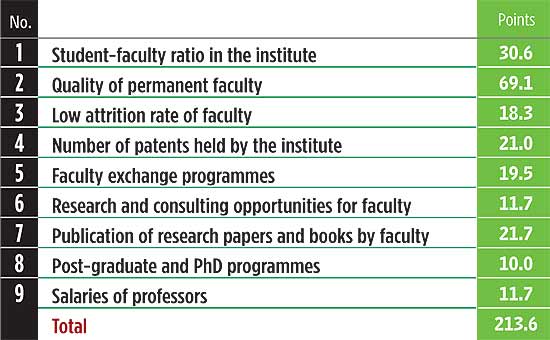 A similar system of points has been used to rank medical, dental, hotel management, social work, architecture and law colleges

A Slight Of Hand