Message In A Bottle 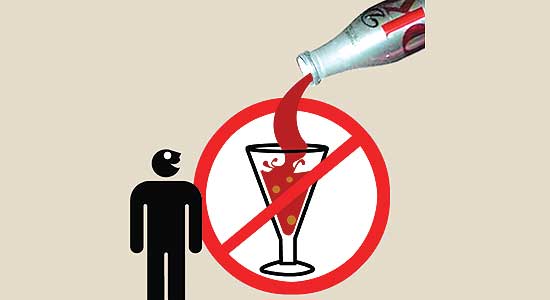 Thank God for those opaque bottles of Diet Coke! Without them, the 25th reunion I attended in Ahmedabad last month would likely have been considerably less spirited. The sight of grown, balding, paunchy men behaving as if they were errant children as they swigged furtively from bottles containing some undetermined alcohol would have been peculiar had not regression into nostalgic adolescence been the whole point of the occasion. In an odd way, an anachronism called prohibition added to the feeling of being pimply and young again as we relived the guilty pleasure of breaking rules and getting indiscriminately wasted.

Sixty years after prohibition was written into our Constitution as part of the directive principles, it lives on in India in a single state burdened with the tag of being the birthplace of the Mahatma. The continuation of prohibition in Gujarat is an oddity for more than one reason. It’s not in line with the Vibrant Gujarat project, where the state wants to present a  blow-dried, spruced-up image of itself for the global investor. Nor is Gandhi the apostle of choice in this state, where the appropriation of Sardar Patel as reigning deity has more or less been completed. In general, Gandhi makes politicians of all hues very uncomfortable and, unlike Nehru or Patel, has no inheritors who wield any power. And yet, the talismanic power of this inconvenient architect of Indian freedom continues 60 years on.

Sixty years ago, prohibition was part of the project to make the Constitution more Gandhian. Having said that, it was not out of line with the feelings of a broad section of India, which looked upon alcohol with anxiety and dread. Prohibition in India was simply the institutional face of a deep-seated guilt about drinking. Of course, even then, there were dissenting voices. Ramachandra Guha, in his illuminating book India after Gandhi, mentions a speech made by adivasi leader Jaipal Singh Munda, in which he argued passionately that prohibition was an interference with the “religious rights of the most ancient people in the world” and that alcohol was part of their festivals, their rituals and their daily life itself.

Of course, in some ways, the tribal comfort with alcohol only emphasised the fears that the middle class had with the idea of drinking. The fear of alcohol was part of a larger fear of the wild, unregulated self, wherein one’s natural impulses were looked upon with suspicion and distrust. Prohibition legitimised the infantilisation of desire, as it equated drinking with a loss of control over one’s self. At one level, the fear of drinking was the fear of who one really was, deep down, without the civilising restraint of culture. Cinematic  representations of alcohol inevitably emphasised its role as a truth serum for those seeking self-pity. It aroused baser desires and provoked tearful confessionals.

Curiously, or perhaps not curiously at all, the armed forces were always exempted from this great need to protect people from themselves. Liquor was not only permitted, it was virtually given away. A bottle of rum was the standard currency for anything in the military. Just as we needed our citizens to stay paralysed in straitjackets of guilt, we needed our jawans to produce the animal heat of masculine action. Alcohol feminised the civilian and masculinised the warrior, evoking pathetic self-pity in the former and self-forgetful courage in the latter.

Of course, much has changed with respect to drinking in the last decade or so. Gone is the fear evoked by personal desire. In its place, we have a heightened desire to consume the world through the senses. Alcohol is today a collaborator rather than a sneaky traitor, a cheerleader rather than a Father Confessor. When it loosens our tongue today, we sing songs of Punjabi joy rather than Mukesh melancholy.

And yet, prohibition lives on in India hollowed out and subverted, existing in the grey area between lack of intent and paucity of action. At one time, its continued existence told us something about ourselves. Today, it is treated as one would a strange but apparently traditional custom, which no one understands but which no one can get rid of. In the meantime, if you happen to be in Gujarat, remember, opaque bottles of Diet Coke are freely available.

(The writer is an advertising guru and commentator on social trends.)

Notes From The Soil