Men (Not) At Work

Idling too earns them wages. It's a nasty relapse of an old Left habit. 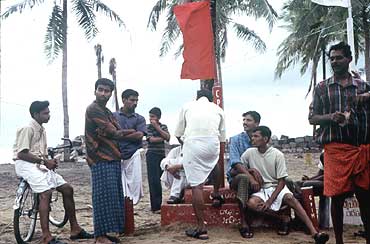 Here's why the ruling CPI(M) in Kerala wants to rein in its labour force:

The trade union movement in Kerala has largely thrived on blessings from the Communist parties. Ironically, the ruling CPI(M)-led front in the state today is facing problems from the very institution it nurtured. Worker's unions have crossed all limits by making it a practice to demand money for work they are not doing. They call it 'nokku kooli', or wages for (just) looking on. While this practice has only picked up ever since the Left came to power, its latest victim is the Vikram Sarabhai Space Centre (VSSC) in Thiruvananthapuram.

It was a norm till the other day: vehicles that brought in machinery, including sophisticated equipment, to VSSC, the Indian Space Research Organisation's lead centre for launch vehicles, had to stop half a km away from its gate. They can enter only after the lorry drivers paid the union leaders nokku kooli. The government eventually saw the ludicrous aspect of it—state industry minister Elamaram Kareem, himself a trade unionist, intervened and stopped it.