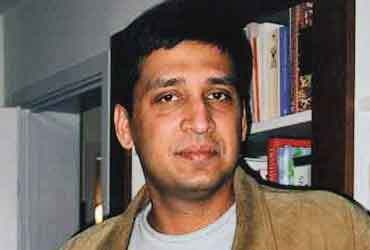 The Bus Stopped
By Tabish Khair
Picador Rs 495; Pages: 199
For a fiction writer, the world of the everyday can be both an inexhaustible reservoir of details and a bottomless well from which it is impossible to extract meaning. Without access to the tiny, sensory impressions and the careful logic animating what we choose to call ordinary lives, fiction can become sterile, no more than an impressive formal exercise even at its best. But it is a brave writer, and one worth paying attention to, who believes that a novel can be shaped and given meaning by what has been found in the commonplace, everyday world, even when this is seemingly no more than a bus journey in a provincial area of Bihar.

It is exactly such a bus journey that creates the premise for Tabish Khair’s deceptively slim novel, The Bus Stopped. A ragged bunch of characters are on board a bus doing its daily run from Phansa to Gaya, a ride that at Rs 35 costs less than a cup of coffee at Barista’s. While an external narrator frames the journey and its central themes of home and displacement, the story of the journey itself is communicated to readers through short, lyrical chapters that move between the points of view of the various passengers.

What does a eunuch turning his or her back on the traditional business hope to find by changing towns? Is the boy clutching the Banarasi sari the same as the one who let the murderers into the flat of Mrs Prasad? Does Mangal Singh the driver possess an internal self that belies his rough-and-ready exterior? Who is the unnamed narrator who frames the novel for us with his reflections on his ancestral home in Bihar and his present-day sense of dislocation? How does the land cope with the changes in motion in and around it?

Khair’s novel does not provide definitive answers or resolutions to all these questions. What it instead offers us is a close acquaintance with the modest desires and defeats and holding patterns of people usually dismissed as insignificant, and most importantly, the contours of a land whose nuances have to be teased out by a writer’s careful craft.

The passengers and their relationships with each other change as the bus moves on. So does the land around them, rendered alive by modernist metaphors that appear inherently right even when one senses a western or metropolitan provenance to them: "The motorcycle wobbles dangerously and regains its balance, the woman readjusts the pallu on her head with an automatic hand. Soon they are a dwindling speck on the long and narrow road. Above them, the sky stretches like a blue marble tabletop in some roadside restaurant, wiped by some serving boy with a dirty rag dipped in watery white phenol."

Neither modernism nor modernity, however, are unknown entities in the realm of the Phansa-Gaya bus. In spite of the careful attention to realism of detail and character, and notwithstanding the lyrical beauty of many of the passages, Khair wants us to know that his novel does not depict an unchanging, self-contained world. The central denouement promised by the title may mislead the naive reader or lazy reviewer into seeing this book as an exotic portrait of a timeless rural India, but Khair shows us in many different ways how the provincial has already registered the presence of the metropolitan, modern world.

There is the narrator, who must grasp his childhood through memory; the visiting NRI children of Mrs Prasad; the Danish businessman Rasmus with a briefcase full of bribe money and a head crowded with awkward memories of his Indian father; the eunuch Farhana who metamorphoses into Parvati by the end of the journey; and Mrs Mirchandani with her Hindutva beliefs. The most significant of all these quasi-modern presences is also, however, the most oblique, coming in the form of graffiti glimpsed by Mangal Singh. It is a message in Devanagari that includes an invitation as well as a command: "Proust Padho."

Proust certainly serves to remind us that everyday details can be rendered transcendent through art and memory. This slender novel, so different from the voluminous excavations of Proust, does not strive for the transcendent. What it does believe, and often illustrates with great skill and empathy, is that it is possible to reach into everyday details and seemingly commonplace stories and construct a work greater than the sum of its parts. On the surface a book about a bus journey, The Bus Stopped is a novel that reflects deeply into the nature and circumstances of human mobility in our modern, unforgiving world.

Siddhartha Deb is the author of the novel The Point of Return.)