Art & Entertainment Memoirs Of A Geisha

Memoirs Of A Geisha

It gets too trapped in its haunting atmospherics; if only those lush images could melt with some profound emotions. 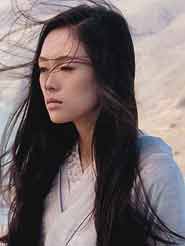 "My world is as forbidden, as fragile; without its mysteries, it cannot survive," says the geisha. However, the many mysteries never quite come alive. Set a little before and during war-time Japan, Rob Marshall's film, at best, remains just a sentimental story about the secret love of a geisha, Sayuri (Ziyi), for a man she cannot have. Much like our very own Umrao Jaan. Quite deservingly, the film has been nominated for most of the technical awards at this year's Oscars. It boasts of stunning cinematography, mesmeric colours and awesome locales. Trouble is, it gets too trapped in its haunting atmospherics; if only those lush images could melt with some profound emotions.

The exoticisation of the East is also quite inescapable: the art and artifice debate, kimonos, make-up and hairdressing, protocols of love-making and the auctioning...