Melting Of The Wax

A candle-lit vigil at Wagah is now a people's movement. Can Delhi see the light? 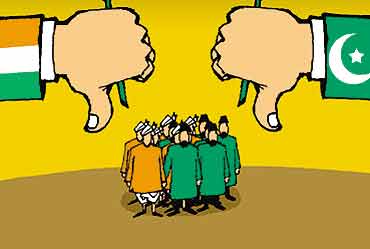 outlookindia.com
-0001-11-30T00:00:00+0553
It had to be seen to be believed. The Wagah border separating India from Pakistan awash in a sea of humanity. Nearly five lakh people with an unlikely slogan on their lips: Hindustan-Pakistan Dosti Zindabad. They had travelled a long way, from faraway villages and towns, and further from their fears and insecurities. Most of them were waving lit candles, confident it would show the path to the future.

Eight years ago, it was just a dream when six of us, Justice Rajinder Sachar, scholar Sayeeda, Outlook editor Vinod Mehta, Dr Amrik Singh, the late Nikhil Chakraborty and myself lit candles on the border to ring in the 50th year of Independence. It was a symbolic gesture—almost a heretical one at that time—to emphasise that people on both sides had no enmity towards each another.

Today, it's become a people's movement. Men, women and children come from different parts of Punjab and beyond to participate in the celebrations which come to a culmination at 12.30 am, when Pakistan was born (IST is half an hour ahead). Many carry in their hands the flags of India and Pakistan. Border villages throw open their kitchens that night for weary travellers. There's music through the night, people agog with the beat of drums. It's an ecstatic, emotional experience, a sort of catharsis for two nations who have killed over 10 lakh of their peoples during Partition and the three wars following it.

A question I've been asked many times is: how many were celebrating from the other side? Well, they weren't there for the night. But in the evening, to watch the lowering of the flags on both sides, there were roughly 25,000 of them this year.

The Pakistan government, like ours, has built a visiting gallery which can accommodate at least 20,000 people. The gallery didn't exist when we started our candle-lit vigil. Last year, for the first time, we invited MPs from Pakistan to participate in our function. And since MPs and their wives don't require a visa, 18 of them came with their spouses. This year though, only three could make it, perhaps because of the byelections there and the National Assembly session.

Eight years back, it was a lot different. The governments and bigots on both sides were relentless in their attacks. We were jeered on the Indian side as the mombattiwallahs, anti-nationals. On the Pakistan side, anyone visiting India was suspect. But gradually, down the years, many citizens in India have come to realise that people-to-people contact can only improve the atmosphere, best shown by the rousing reception our team and the Indian fans got in Pakistan during the recent cricket tour.

Unfortunately, the establishment in Pakistan is still not reconciled to contact at the popular level. Whatever Islamabad's rhetoric, it doesn't like 'familiarity' without sorting out 'basic problems'. Asma Jehangir, a leading human rights activist in Pakistan who coordinates with us, is roughly handled whenever she comes to the border. This time, it was worse. Some nameless, faceless Rangers pushed her back as she was waving to me. She and the activists accompanying her were literally thrown out. The Rangers, brandishing sticks, were equally rude to me in both verbal and body language. What kind of behaviour is this when every statement issued by Islamabad talks about the need for more people-to-people contact? I suspect the Pakistan establishment issues special instructions that human rights activists must be humiliated.

Things are only slightly better on the Indian side. The government doesn't allow lamps right on the border, as was done earlier. And the red tape is suffocating. Three Pakistan MPs coming to India were detained at the immigration office for one-and-a-half hours under the pretext that their 'travel documents were being processed'.MPs don't require a visa since they have a diplomatic passport. The Pakistan MPs later complained to me that the Indian side was more cussed than theirs. Even my requesting the officials was to no avail.

Contrast this with last year when it did not take more than 15 minutes for all the 18 MPs to get clearance. I hope it's not because the new government has issued instructions to officials that they should be less than inviting. For otherwise, the delay did not make sense. One thing is for sure, facilities have to be improved.

I didn't entirely expect Prime Minister Manmohan Singh or President Pervez Musharraf to come to Wagah although I had written to them six weeks earlier to join the celebrations at any time between 7 pm to 12.30 am. Perhaps the security issue was a hazard, but I think it was churlish on their part not to send even an acknowledgement, much less a message. Why New Delhi and Islamabad don't even think of common courtesies when it comes to bilateral ties I can't understand.

Many still doubt the efficacy of people-to-people contact, and I don't blame them. They are looking for results to come, tomorrow or the day after. In the long run though, public pressure will count. And this alone can help evolve a solution. Both Benazir Bhutto and Nawaz Sharif told me separately—when one was in power and the other in the opposition: "Kuldip, keep it going. Your people may one day solve the problems between us, not the governments."