Australia denies it's racist, but why the spate of recent attacks on Indian students? 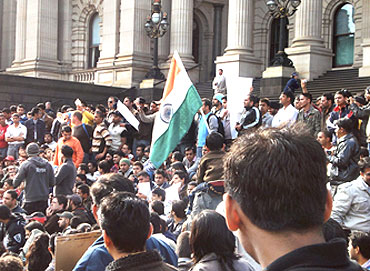 It’s incredible how the beast called racism suddenly springs out of nowhere, to feast on the non-white ‘outsider’, as it has been doing regularly in the past month in Australia. Ask 25-year-old Baljinder Singh, a Haryana lad come to study at the Australian Institute of Technology in Melbourne in 2006. At 10.15 pm on May 25, he alit at Carnegie station, a relatively wealthy Melbourne suburb where his friend stayed. It would take Baljinder another 15 minutes to walk to his friend's house. It was midway that two white youth approached him, asking for money. And though Baljinder had never encountered mugging, his instinct prompted him to give them the cash in the wallet he had in his bag.

As Baljinder bent to open his bag, one of the two whites stabbed him in the stomach. "It happened so quickly that I didn't even know I had been knifed," he recalls. The assailants fled away, melting into the darkness. Baljinder was rushed to the hospital, where he underwent a surgery. "I'm recovering okay," he told Outlook. "I'm scared to step out."

The summer of 2009 has been a racist nightmare for Indian students, full of a sport insensitively dubbed "curry bashing". The phenomenon is surfacing unannounced, gatecrashing parties. This was how it found Shravan Kumar, 23, from the Cambridge International College, Melbourne. He was attending what you could call a welcome party where half the 20 guests were students from India who had just arrived in Australia. 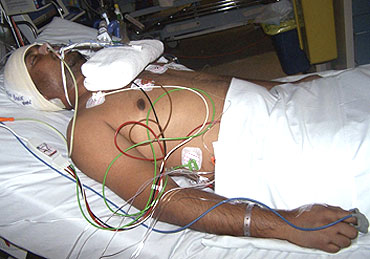 It was an introduction to Australia those 10 students wouldn't want to remember. Shravan's friend, Kaushik Mamidi, a 25-year-old from Hyderabad who has been studying here for 19 months, remembers "two guys barging in". They were drunk and bellicose. "They began calling us Indian bastards and mo****fu***rs," he says. The Indians somehow cajoled the abusive duo to return to their car, but then one of them began to throw jabs at an Indian. As one assailant was promptly pinned down to the ground, his companion fished out a screwdriver and lunged at Shravan. He sustained serious skull injuries, but is now said to be out of danger. His assailant was subsequently arrested.

For those back home in India, it might seem as if Australia has suddenly turned viciously racist. But the truth is, Indians have been victims of racial abuse for years. According to one estimate, 1,447 people of Indian origin were victims of crimes such as robbery and assaults in the year ending June 30, 2008, an increase from 1,082 over the previous year. As Amit Menghani, president of the Federation of Indian Students in Australia (FISA), says, "This has been building up since 2002, the year in which FISA was formed. But all this has become high-profile only because the Indian media played up the attack on Shravan." The Indian media didn't even have to look around for follow-up stories—incidents of violence against Indians suddenly seemed to mushroom all around, from a cabbie being slapped to a gurudwara being ransacked, though the latter was subsequently found to be untrue.

All this has sparked off a great debate, the motion being: would it be right to describe all violent incidents involving Indians as racial in nature? The Victorian government's answer was an unequivocal no, arguing that in most cases the assailants were looking for soft targets to rob—and Indians seemed vulnerable. Partly, it is said, Indian students aren't aware of the cultural clues that allow people to recognise danger and take suitable precautionary measures. Then again, it is claimed, Indian students don't move in gangs, those rich flash their iPods and laptops, and the less privileged have to perforce take menial jobs to finance their studies, working late night shifts at restaurants or gas stations, precisely the hours when the country's underbelly comes alive. These poorer students have to reside in unsalubrious neighbourhoods where just about everyone is unsafe at night. Also, the Indian community isn't the only one targeted. For instance, in 2008, out of 36,765 victims of robbery and assaults, as many as 24,000 victims were Caucasian.

This belief is precisely why Victoria (Melbourne is its capital) deputy police commissioner Keiran Walshe asked Indian students to take small measures to ensure their safety. "Really, what we are saying to them is to be aware of their surroundings, try to walk in areas that are well-lit," Walshe said. "If you are in a public place, don't count your money." Interestingly, Baljinder believes in the soft target theory, but not because Indians are prone to counting their money in public places. "We are soft targets because many of us are concerned about going to the police with complaints, fearing it could jeopardise our visa status or make it difficult for us to get permanent residency at a later stage," he says, simultaneously insisting that some incidents have definite racial undertones. 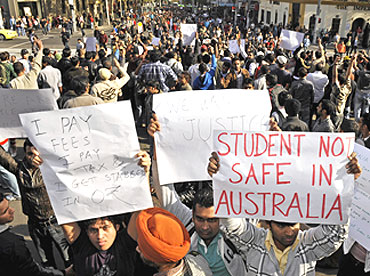 Fanning the raging debate was Indian high commissioner Sujata Singh, who flew down to Melbourne. After meeting the students, she said that while many of the incidents could have occurred because of random thuggery, some clearly were racial in tone. She accused the Victorian police of being insensitive to some of the Indian crime victims. The Australian newspaper's foreign editor, Greg Sheridan, in his piece, 'Blind Eye to Racism', criticised the Victorian government for believing that it's "impossible to be opportunistic and racist". Sheridan wanted Canberra to take note of the adverse publicity the attacks on Indians had generated worldwide, saying that the "Australian government could not have got a worse result if it had spent a billion dollars on a negative publicity campaign."

This adverse publicity prompted Australian prime minister Kevin Rudd to assure his Indian counterpart, Manmohan Singh, that the security atmosphere would be improved, that a special task force has been established to spend more money on security in and around Melbourne. Many, like Rudd, are worried over the impact these attacks could have on Australia's education sector, which is the country's third largest export-earner and generated Au $15.5 billion in 2008. Indians play a crucial role, representing about one-fifth of the 4,15,000 foreigners studying here, second only to those from China. And more than half of these Indians are enrolled in Victoria.

Alarm bells are already ringing in the Indian student community. "Some of the students are weighing the option of moving out from Melbourne to another smaller, quieter town like Adelaide or, in the worst case, packing up and leaving for home," says Menghani. But Glen Withers, who heads apex university body Universities Australia, says the problems Indian students encounter are not because of the cities they live in, but rather the institutes that they are enrolled in. "About 30 per cent of foreign students," he explains, "attend main universities; the rest are in these smaller institutes where students with less money go. At the main universities (like Monash or Melbourne University), we have 24-hour security, buses at late night to take students back and forth from home to library, and guards everywhere. The smaller places don't have these facilities." But since these attacks could have an impact on applicants to main universities, he advocates a more holistic approach.

Isaac Balbin of the Royal Melbourne Institute of Technology, a mainstream university, says most smaller institutes are fly-by-night "shopfronts" which lure foreign students through greedy agents who promise good jobs and a great lifestyle while studying. For instance, he says, "there is a college not far from RMIT which has a similar name as ours and I've often found students wandering in there thinking it's RMIT that they've come to." Not only security, even courses at these shopfronts are poor. "The government can do only so much when it comes to improving the security and safety for students," says Balbin, "but the main approach to finding a solution is to look at the agent networks in India which recruit students for these shopfronts. That's really India's responsibility."