Meet The Other PC

The man who paid $5.7 billion for Basell, the biggest-ever deal involving an Indian 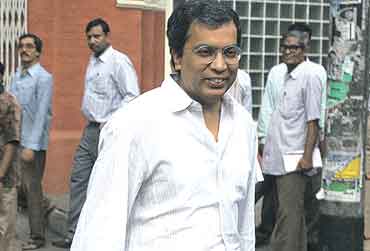 outlookindia.com
-0001-11-30T00:00:00+0553
No longer will India think only of the arts and academics when reminiscing about Bengal's glory, and of Tagore, Ray or Amartya. It will also think of big money. New York-based Purnendu Chatterjee has taken the legend of Bengal from verse to commerce in one formidable stroke, with the $5.7 billion (Rs 25,000 crore) deal to buy Basell, the world's largest producer of polypropylene. It's the biggest-ever business deal involving an Indian. The personal computing skills of PC, as he is informally known, have ensured he will be counted among the people who matter.

"He is symptomatic of the changing face of Bengal. Instead of writing poetry, he has been filling the account books," says Aveek Sarkar, chief editor, ABP group, who has watched PC's rise. "He is an unusual Bengali—enterprising, hard-driving, aggressive." World markets are abuzz with the news of how PC, The Chatterjee Group chairman, and another daring investor, Russian-born billionaire Leonard Blavatnik, teamed up to pull off the deal. To put it in perspective—PC now has a large piece of the global "plastic" pie. Basell has factories in 21 countries and produces materials omnipresent in today's plastic-is-fantastic world. From packaging to bottle caps, seat covers to vegetable wraps, pipes to toys, Basell's products envelop daily life. The firm holds 8,500 patents. 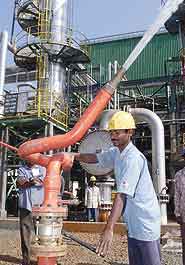 The acquisition is quintessential PC—think globally and 10 steps ahead of the competition. Since he and his associates hold a majority stake in Haldia Petrochemicals Ltd (HPL) in West Bengal, a plant he revived in the late '90s by pumping in $200 million-odd, the synergy with Basell will increase marketshare in Asia. It will create a two-way flow of knowledge, insights, products and bring engineering jobs to India, PC calmly told Outlook despite being woken up at midnight in Mumbai.

The Basell deal, he insists, is "a story about India arriving on the global stage, not about individuals." The success of Haldia gave him "the insights and the confidence" to bid and he hopes for a ripple effect of aspirations in other industries. "I'm just trying to do what's possible. As an individual, I am immaterial," he says. The modesty is endearing but contrasts sharply with the bold entrepreneurial streak. As an intrepid risk-taker, PC likes to operate on the edge, taking on challenges others might ignore as financial suicide. He's had brushes with the law, been on the wrong side of the US Securities and Exchange Commission (SEC), paid big fines but gone on ever more audaciously.

It is hard to dissect PC's financial profile, given the tangled web of crossholdings and multiple stakes. Even PC-watchers are unsure of what his personal net worth is, guesses range from $500 million to $1 billion. He has assets in airlines, energy, telecom, computers and real estate in the US, India and other countries. Yet he dresses simply, speaks with a Bengali accent, and prefers to catch a movie, read or listen to music, rather than party.

It's an amazing rags-to-riches tale. Born in a Calcutta middle-class family, losing his father when only 11, he went to IIT Kharagpur to study mechanical engineering because he "liked to use his hands and build stuff". It was an incendiary time, the height of the Naxalite movement, but PC "never really understood why they could not change the system, instead of trying to break it". Graduating in '71, he arrived in the US to do his MS and PhD from the University of California, Berkeley. Things soon began falling in place—a good job, happy matrimony with Amrita, the daughter of industrialist and ex-West Bengal governor Viren Shah, and contacts with the big boys. He joined consultancy firm McKinsey, where Rajat Gupta, former MD and now senior partner, remembers interviewing PC. "We share a wonderful friendship, both professional and personal," Gupta says. "He is a visionary.He can see around the corners others might not."

After 10 years at McKinsey, PC branched out in '86. By then, he'd met and impressed legendary investor George Soros with his canny ability to spot a winner from the hundreds of companies seeking venture capital. Soros appointed PC to co-manage the $1.5 billion Quantum Industrial Holdings Fund and the $500 million Global Power Investments, both aimed at emerging markets. PC soon acquired a reputation for buying companies, getting on their boards, then breaking them. He didn't quite become the reviled corporate raider of the go-go '90s, but often played close to the edge of the law. In '93, he settled SEC charges following charges that he passed on inside information to brother-in-law Sukumar Shah and another investor about the impending sale of Foxboro Corp, where he was a director. He paid a $643,855 fine without admitting wrongdoing. Other unsavoury stories involving a hostile takeover bid of T-bar, a computer company, and the breakup of Tektronix Inc., an electronics company, have been reported in mainstream US media.

But in India, PC's track record has been one of building. "Haldia is largely his success. He had the foresight to come to Haldia when others were pulling away," says Sarkar. Rumours have persisted for years of PC shedding Haldia, but he demurs. He is trying to be a new blend of entrepreneur—investment banker plus. He not only invests other people's money in a business but wants to run it too. Some say it creates a potential for conflict.

Over the years, PC has developed a good working relationship with Bengal's dogged Marxists but there is a degree of discomfort. For some in Calcutta, he still represents the "dark face of rampant capitalism". Initially, he was criticised for promising big, delivering small and refusing to cede control of Haldia. PC would argue he's creating wealth, jobs and much more by making it possible for Haldia to access the best in technology. The Basell deal has certainly put him in a new league. "We are looking for dominance in global petrochemicals," he says (see interview). The young boy in 1960s Calcutta, who would borrow the day's newspapers from neighbours, rent them for a fee to others who didn't buy them and later return them to the owners, has now shown the world that he knows how to play the big game.