Media: The Turn Of The Phrase

The writing on the wall doesn’t mean we drop our guard or critical faculties. But neither does it mean we join the pack. 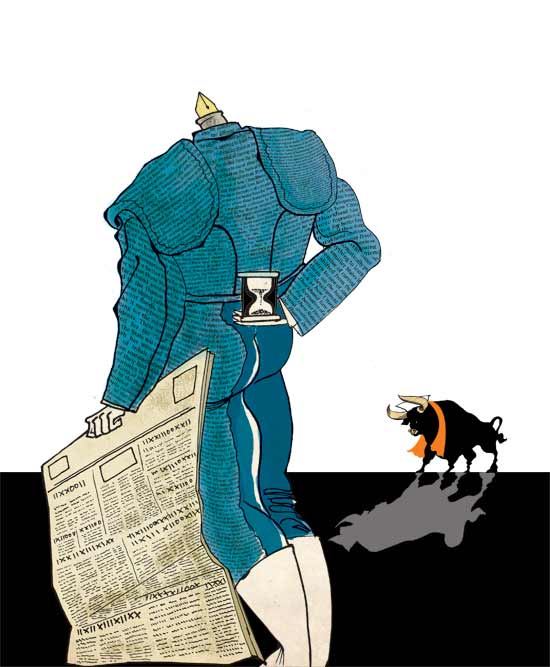 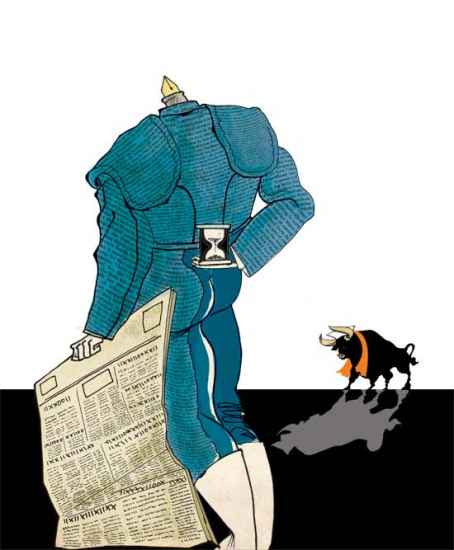 The Emergency of 1975 is a watershed in the relations between politicians and the press. With a few honourable exceptions, the press was exposed, in the memorable words of L.K. Advani, as crawling when it was just asked to bend. I have often wondered why a large section of the older journalistic fraternity dislikes Indira Gandhi so viscerally. It is true she “throttled” the press, but she also put on grand display the humiliation of the press corps for the entire country to watch—a humiliation in which the press corps participated enthusiastically.

Till 1975, relations between journalists and politicians had been cordial—perhaps too cordial. The Emergency turned that cordiality into what it has become today: adversarial.

Along the way, in 1987, another attempt was made to muzzle the press by Rajiv Gandhi through the Defamation Bill which sought to put severe penalties on journalists and newspapers for printing what the politicians believed was unfair criticism amounting to defamation. That effort boomeranged and the bill had to be withdrawn hastily in 1988. Rajiv had egg on his face.

But the tectonic change in the relationship happened in the last decade-and-a-half with the advent of 24x7 news television. I think it would be fair to say that in 2014, politicians across party lines loathe the press and are itching to tame it. When the Radia tapes scandal broke, implicating a large number of print and TV journalists, I found politicians, even from parties embarrassed by the disclosure, hugely enjoying the discomfiture of the media.

Politicians have long memories of journalists they consider hostile. Getting even is okay but within prescribed norms.

Only last week, BJP spokesperson Meenakshi Lekhi warned the media on a TV debate to mend its ways. It was a cryptic statement meant only for that part of the media which was critical of Narendra Modi. Today, hardly a day passes without some party or the other issuing threats to the media and journalists. Precisely what the threat involves is never made clear. It is like a sword hanging over journalists.

Media offices currently are abuzz with fantastic stories of how the likely new NDA government led by Narendra Modi will settle scores with those hacks Mr Modi and his party think interrogated the potential PM too aggressively and too consistently about his alleged crimes and misdemeanours in Gujarat. One or two casualties are already visible and, I understand, more will follow. The atmosphere is rife with fear and fright.

Perhaps, some of us in the business deserve Narendra Modi’s wrath. He is perfectly entitled to it. Politicians have long memories of journalists they consider hostile. Getting even is acceptable as long as it is done within prescribed norms. And in that, I include putting pressure on proprietors to make suitable editorial changes so that ‘friendly’ editors run media platforms.

No need to get outraged. All political parties at some time or the other have been guilty of committing the said ‘act’. I am not going to name names of those editors who got the chop courtesy proprietors not willing to take risks. That’s dangerous territory leading to the courts. I don’t wish to add to my vakalatnamas.

Editors cannot complain. Being sacked, rightly or wrongly, is a professional hazard—it goes with the job. And this is true all over the free world. One of the greatest editors of recent times, Harold Evans, has been out of work for nearly 35 years simply because he fell out with Rupert Murdoch; no other proprietor was ready to employ him after Murdoch’s thumbs down.

Here we come to a tricky issue. What is the ideal or even workable relationship between politicians and journalists in a free society? This is a subject I have visited before and I am happy to inform readers that my position remains unchanged. I believe it is positively dangerous for journalists and politicians to get too cosy, or become friends. In such a relationship, the odds always favour the politician. It is the journalist who gets ‘used’. Unfortunately, Indian journalists, especially Delhi journalists, consider becoming friends with a politician a great honour. They boast about it. If he happens to be a cabinet minister, the honour is doubled.

Today, you are either pro- or anti-Modi. I’ve supported Modi, with caveats. Alas, my position was taken as a copout.

I was a hands-on editor for nearly 40 years. Very early on, I decided on a policy which has served me well. Fully aware that I have to regularly interact with politicians, even occasionally accept their hospitality, I had to ensure the politicians knew what the terms of the trade were: when the occasion arose, I would happily ‘betray’ the politician. Therefore, to ensure he or she was aware that betrayal would always trump friendship, I thought it was advisable not to get into a situation where the politician could claim he has been double-crossed.

On a practical level, I made sure not to accept any ‘favours’. One favour leads to another and soon you are caught in a web of favours. Consequently, whenever I take a politician out to lunch, I always pay the bill.

I think I was still in Debonair or had just started The Observer in the early 1980s when Murli Deora sent me Diwali dry fruit, and for my wife, a rather expensive silk sari. Even at that early stage in my career, I faced no dilemma. I kept the dry fruit and politely returned the sari. I have followed that rule for 40 years.

My friend, the award-winning journalist Phillip Knightley, who was Harold Evans’s star reporter, told me of the rule Evans started for accepting Christmas presents in The Sunday Times. If someone sends you one bottle of whisky, accept it. If he sends you a case of whisky, return it. This way the journalist, without seeming to be a person of Gandhian rectitude, keeps his probity.

These days when you hear of journalists owning three or four properties, you know corruption has sunk deep into the profession. Why only editors, journalists much lower down in the hierarchy are sitting on farmhouses. I mention editors in particular because a corrupt editor corrupts his entire staff, he cannot enforce ‘honesty’ because he is dishonest himself. The reputation of the media today has suffered serious erosion.

I am not revealing any secrets when I say that presently the entire Indian media is polarised. You are either pro- or anti-Modi. No other space is available. Now, I am not one of those journalists who believes that in their quest for complete independence editors should become ideological eunuchs. Even if it was possible, it is not desirable. As editors, we must continue to be faithful to our biases and within that parameter exercise our professional judgement to decide what stance to take on any particular issue.

Unfortunately, since politicians and political parties love to pigeon-hole the media and deal with it accordingly, the independent journalist faces many extra-professional challenges. I can best explain this with my own case.

Don’t politicians have any responsibility to respect dissident opinion? Must it always be motivated?

Despite being called a ‘drunkard’—I was once caught during a live TV debate on a freezing winter’s night sipping single malt—and a chamcha of the Nehru-Gandhi family, I have tried to function without compromising professional integrity. I believe I was among the first ‘pseudo-secular’ editors to proclaim, both in print and on TV, that Mr Modi should be given the chance he repeatedly pleads for. I began this refrain way back in January 2014. The burden of my song was: Mr Modi’s past notwithstanding, we should give him the benefit of the doubt and judge him on how he behaves in the future, rather than his past. I went further to state that since Narendra Modi had (till then) run a largely development-oriented campaign, he may surprise his critics. My support had caveats, so it was not full-throated, but support it was.

Alas, for these polarised times, my position was taken as a copout, some dastardly trick. You must belong to one camp or the other for politicians to feel comfortable with you. As a result, the role of the media and the role of editors/journalists in these hot summer months has been harrowing.

After having read the writing on the wall—which says Modi will be the next PM—what posture should the media have adopted during the critical weeks? After all, the writing on the wall, however clear, does not demand we drop our guard or critical faculties. Also, it does not mean we join the pack. Remember, we owe no responsibility to the netas, our responsibility first and foremost is to the people of India—who on the basis of what they hear and read make up their mind. I have no mantra, but here are a few suggestions:

Whatever position he finally takes, he can be sure he will receive abuse either for being a lackey or for being a turncoat. That, however, is the least of his worries. Abuse can sometimes be comforting for the dissident hack, all he can hope for is some wit to accompany it.

But I have a question for our rulers and would-be rulers, especially those who keep swearing their allegiance to the free media. Do they not have any responsibility to respect dissident opinion; must it always be motivated? Politicians as a tribe always suspect the dissident of being a spy from the enemy camp or an incorrigible ideological opponent. Neverthe­less, the media has to do its job, however bitter and vitiated the environment. It has to take the bouquets as well as the brickbats.

The great strength of the free Indian media is its diversity. Except for the extreme left and the extreme right, all other canons are represented. These multiplicities clash, they cancel each other out, frequently offering no coherent picture. We must not shirk from presenting doubt and confusion if that is the prevailing reality in the country. One of my fav­ourite anecdotes concerns the legendary journalist and broadcaster, Alistair Cooke. He met Nehru at the UN and told him: “When I became a journalist I was taught there were two sides to every story. But I find frequently there are four or five sides to a story.” Panditji replied, “Alastair, welcome to the Hindu view of truth.” The great American journalist sage, Walter Lippmann, once said, “The theory of the free press is not that the truth will be printed in any one instance, but the truth will emerge from multiple sources.” Thank God India has multiple sources.

What’s my verdict on how the media has covered the Dance of Democracy 2014? It has been opaque, shambolic, inconsistent, ear-splitting, duplicitous, over the top, rev­ealing, sly, half-true and, occasionally, exemplary. In other words, it has reflec­ted perfectly the way political parties fought Election 2014. What more could you ask for?