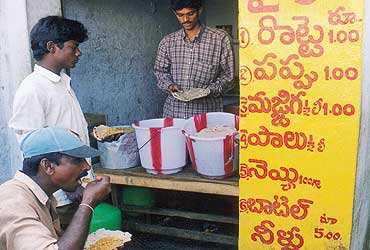 outlookindia.com
-0001-11-30T00:00:00+0553
When S.P.Y. Reddy, chairman of the Nandyal-based Nandi group of industries, told his wife Parvati about his new business idea, she thought it was absolutely ridiculous. Parvati cautioned him against publicising his idea for she feared that her husband would come across as somebody who had lost it. A discouraged Reddy kept quiet for a year. Finally it got too much for him, and last October Reddy decided to ignore his wife's advice and go ahead with his plan of serving meals for less than the cost of a cup of tea, and most importantly, make a profit! Now, four months later, the only one laughing is Reddy. His novel food counters are such runaway hits that he's having a tough time catering to the demand.

The company started with just one counter in Nandyal but the response has been so overwhelming that in less than three months the Nandi group has been compelled to open 40 outlets in Nandyal and four in Kurnool. They are now planning to cover several other towns across Anantapur, Cuddapah and Kurnool districts. By March, they hope to expand to other parts of Andhra Pradesh, including Hyderabad.

These takeaway counters don't offer any gourmet fare but they dish out wholesome food at unbeatable prices. With a jowar roti costing Re 1 and a bowl of boiled dal also priced at Re 1, breakfast can be had for a couple of rupees. For lunch, if one eats two rotis with a plate of vegetable kurma followed by a bowl of fruit salad, and then washes it all down with half a litre of buttermilk, it costs a meagre Rs 5. Half-a-litre of thick buttermilk, a 350 ml bowl of fruit salad or a cup of vegetable kurma are all priced at Re 1.

Says farmer Venkataramalu: "Whenever I used to come to the city before, I couldn't afford to buy any lunch but now all I need is Rs 2." For innumerable people like him in drought-ridden Kurnool district, these bargain food counters have become an affordable answer to their mid-day hunger pangs. And many people now revere businessman Reddy as a local saviour.

Though the motive behind opening these counters is to give the poor a chance to buy wholesome food, and that remains the company's main focus, Reddy points out that this is no subsidised charity but purely a business venture. To keep costs as low as possible, all raw material is sourced directly from the farmers. So, if 1 kg of dal costs Rs 25 in the open market, the Nandi group gets it from the farmers for Rs 15. Similarly, if tomatoes or potatoes cost Rs 10 to 15 a kg in the market, Nandi buys it from the growers at less than half the price. Says Reddy: "We are currently breaking even and making a marginal profit but as our network expands and the business stabilises, we are bound to start making much more money."

The group is currently serving around 25,000 rotis a day and hopes it will touch the one lakh figure by March. The counters are manned by formerly unemployed youths who in lieu of salary get a 5 paisa commission for each roti sold. Says Srinivas, one of them: "Sales are picking up every day and we do about a thousand rupees worth of business a day." Srinivas subsequently earns Rs 40 to 50 a day. The centralised kitchen in Nandyal employs about 200 workers, most of them women. On an average, each woman makes 200 to 300 rotis a day and gets paid 25 paisa per roti.

When Reddy started this business, he thought the counters would cater primarily to the poor, but they have become equally popular with the middle class. "It's cheaper to buy a meal here than to cook at home, plus sometimes the food here tastes better than what my wife makes," admits P. Venganna, a lecturer at the svkp Degree College.

Not everyone is as satisfied though. The value for money offered at the Nandi food counters is threatening to put the local tiffin centres out of business. These traditional budget restaurants are all being forced to slash prices to counter Nandi's brisk business. But nobody seems more surprised by the success of these novel food counters than the man who started it all. "I could never have imagined such a response. We've been forced to expand much faster than we had originally planned because in the first few weeks, the food would just vanish within minutes of reaching the counters," says Reddy. As Parvati Reddy had predicted, some people do think her husband is crazy providing food at the prices he does, but he doesn't really care. With sales climbing at the rate they are, he could soon be laughing all the way to the bank.