Deserving or not, many are adding a book to their name 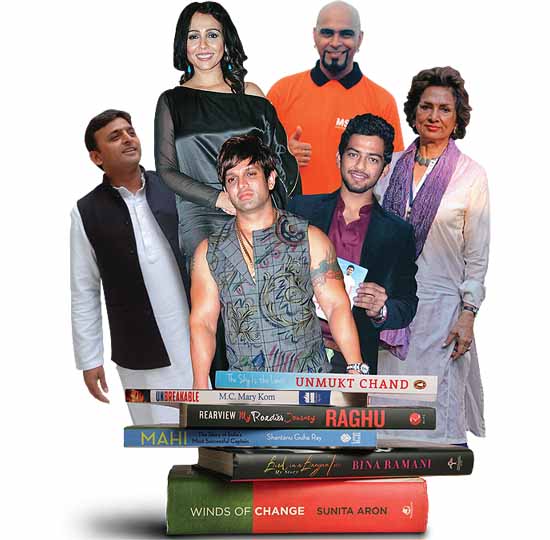 In his colourful autobiography Vita, meaning ‘life’, the Italian Renaissance sculptor-goldsmith-soldier-musician Benvenuto Cellini had decreed wisely: “No matter what sort he is, everyone who has to his credit what are or really seem great achievements, if he cares for truth and goodness, ought to write the story of his own life in his own hand; but no one should venture on such a splendid undertaking before he is over forty.” That was in 1558, as Cellini inched towards age 60.

Circa 2014, age be damned. Under-19 star and Delhi Daredevil Unmukt Chand is only 20 but seems to have enough material to pen a memoir that declares The Sky is the Limit. Rahul Dravid’s presence at its launch late last year lent to it the necessary gravitas, and therefore a huge media crowd.

At 40, and an inglorious year-and-a-half into chief ministership, Akhilesh Yadav already has a 561-page biography on him. Winds of Change, written by senior journalist Sunita Aron, was commissioned soon after the 2012 assembly elections in Uttar Pradesh, which Mulayam’s son won handsomely off Mayawati. Wasn’t it a bit premature to treat him as ‘biography material’, given the current lawlessness in the state and the blot of the Muzaffarnagar riots? “Most of the controversies plagued the UP government after the book had hit the stands,” says Aron. “I may add a few chapters after his innings is over, if the publishers agree.” The book has been published by Tranquebar. 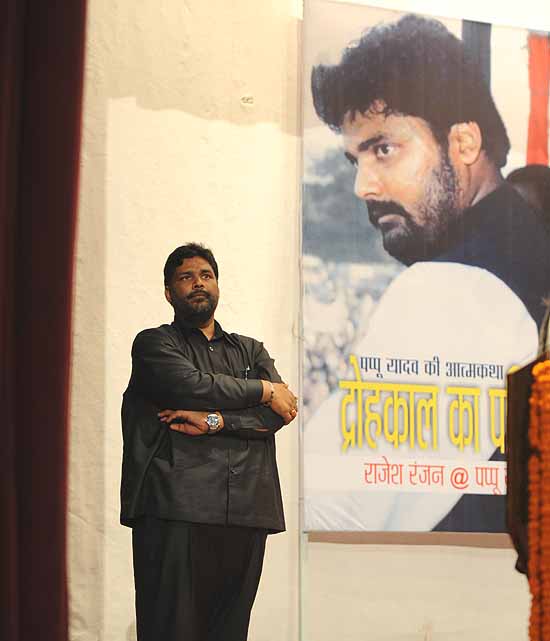 Take no prisoners In which Pappu Yadav tells “his side of the story”. (Photograph by Jitender Gupta)

It was more than a literary bug, though, that bit former Rashtriya Janata Dal MP Pappu Yadav. His autobiography Drohkal ka Pathik just aims to set the record straight on political events, never mind if BJP leader Arun Jaitley reportedly quipped, “I am surprised that even he can write a book.” And though he is said to be putting the past behind him (namely his being exp­elled from the party), the Patna ‘bahubali’ couldn’t resist a sideways jibe at Laloo when, as evidence of his growing clout, he excerpted a magazine article comparing the wedding of his sister to Laloo’s daughter’s wedding. While Laloo reportedly failed to get the likes of Shahrukh Khan and Hrithik Roshan in attendance as he had claimed he would, Pappu Yadav’s supposed clout brought stars such as Shakti Kapoor, Asrani, Raju Srivastava, Chunky Pandey and Udit Narayan to Patna.

For some it’s catharsis; for others the need to set the record straight. What better way than to pen a tell-all.

An affected catharsis was what resul­ted in Raghu Ram’s Rearview: My Roadies Journey. The producer of MTV’s long-running The Roadies apparently managed to land up on AAP platforms—and the publicity did not hurt. “I have had fans take pictures of themselves with my book and tweet them to me,” says the man. He had always wanted to write a book, “especially because I have been a voracious reader of autobiographies and have been inspired by so many of them, like those of Muhammad Ali, Bruce Lee, Mahatma Gandhi, Mike Tyson, Mary Kom. The end of my association with the show The Roadies seemed liked a good time to tell people who followed it about the choices I made and why I made them. My book is not poetic, it is raw.”

Plenty others have discovered books within themselves, and themselves as the best subject of their books. The jury is still out on whether socialite Bina Ramani’s new memoir Birds in a Banyan Tree is a vehicle to once again protest her innocence in the Jessica Lall murder case or simply an exercise in self-indulgence. She was all ready to marry Shammi Kapoor, we learn, exc­ept that “Raj-ji’s conservative streak” and her parents’ reservations about the film star’s “alcoholic” and “womanising” ways got in the way. 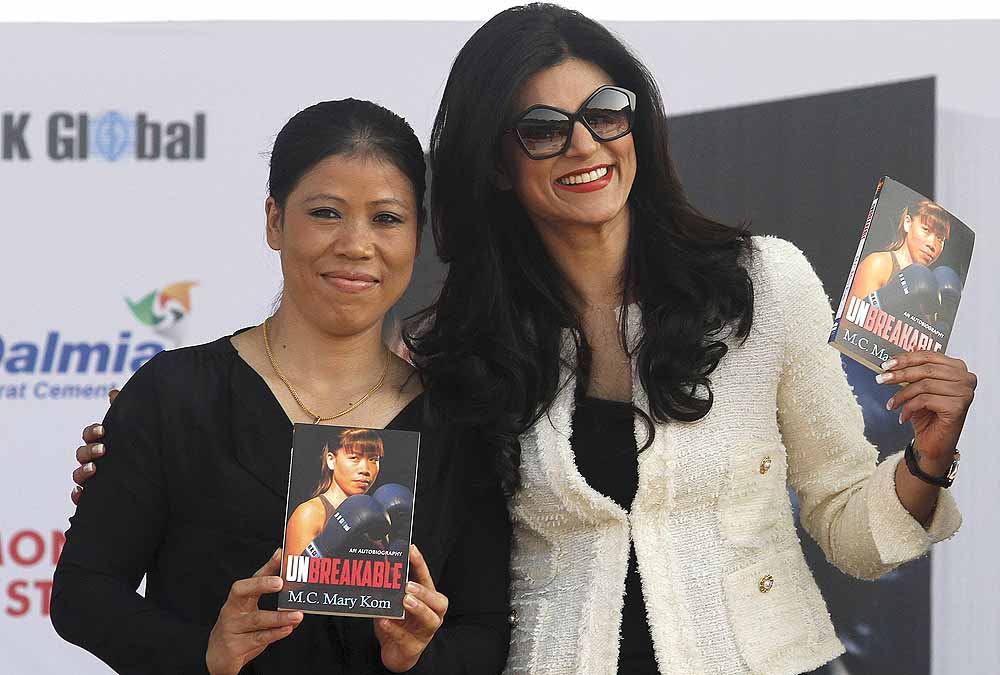 But save the sneers. “There’s alw­ays been a good market for biographies and autobiographies in India,” says Udayan Mitra, publisher, Allen Lane and Port­folio, Penguin Books India. “And with the international success of books like Walter Isaacson’s biography of Steve Jobs or David Maraniss on Obama, the market has only got better.”

There is a new interest in telling personal stories, HarperCollins chief editor V. Karthika feels, and less rel­uctance in revealing controversial, possibly intimate, bits from their lives. Former actress-singer Suchitra Krishnamoorthi made a feeble attempt to reignite the limelight that once surrounded her when, in her tell-all tale Drama Queen last year, she regaled how she once texted Ram Gopal Verma with a marriage proposal.

The people whose stories readers may enjoy reading have so far predictably included politicians, sportsmen, actors and industrialists. That scope seems to be expanding now. “We’re looking at biographies of figures that are hardly written about but whose lives invoke an era that needs to be rec­orded. On our list are biographies of Urdu poet-writer Firaq Gorakhpuri, Sachin Tendulkar’s coach Ramakant Achrekar and freedom fighter A.C.N. Nambiar,” says Roli Books editorial dir­ector Priya Kapoor.

“Books on young stars are written because they see themselves as having ridden the curve.”
V. Karthika, HarperCollins chief editor

If the nature of books written in this genre has seen some kind of a shift, and indeed some movement in reader eng­agement, so has the way they are written. Says Mitra: “A number of biographies are now written by professional, top-drawer biographers or co-written with a top professional writer—both Healer: Dr Prathap Chandra Reddy and the Transformation of India and Jagdish Khattar’s Driven are examples. This is one of the most successful lines of our publishing—with premium hardbacks able to sell tens of thousands of copies.”

Corporate biographies are the biggest sellers, yes, but some publishers are looking at expanding young readership, and therefore hooking young stars even as they get into their groove. “The idea to get Unmukt to write was the proverbial ‘catch ’em young’. He is a well-educated, articulate young man, he definitely had a book in him. A plus was that he had kept a detailed diary from very early on. Unmukt’s book has been published under our Young Adults imprint Inked—speaking to a target audience of young readers. We had also published Saina Nehwal’s autobiography under the same imprint,” adds Mitra.

On having biographies on such young stars, and on whether the decision requires careful deliberation, Tranquebar managing editor Sudha Sadhanand believes popular figures like Dhoni, Saina Nehwal are undoubtedly icons and for each there are layers of stories; challenges, joys, grit and life as a star. “It’s most riveting to know what makes them stars despite challenges,” she says.

And cricketers always make good reading. So even as erstwhile U-19er, Royal Challenger and cricketing superstar Virat Kohli endorsed the cover of Unmukt’s book, hailing him as “a very special player”, he himself had a book written on him, Reliable Rebel by Ayaz Memon and C. Rajshekhar Rao. On the challenge of writing a book on a current cricketer, veteran biographer Gulu Ezekiel says: “There’s so much cricket played round the year that it’s already dated by the time it hits the stands.”

Be it politicians or entertainers flashing winning smiles on the covers of these books, the mood out there seems to “Popular face? Will sell.” Add a sprinkling of controversy, a dash of hardship and oodles of inspiring anecdotes, and you may well have a winner on your hands. The young ’uns, too, seem to have got the formula down pat. A new chapter in the lives of biographies may well have begun, one that looks like it may have many more twists and turns ahead.