McDonald's, Pizza Hut complete 10 years in India. And they haven't Yankeefied us! 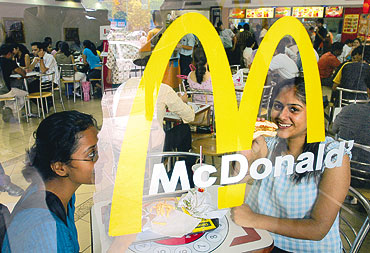 outlookindia.com
-0001-11-30T00:00:00+0553
In Chennai, not too many foodies would contest the fact that the rundown Rathna Cafe in the city's old Triplicane area has been serving the best idli-sambars for many more than three decades. Yet the restaurant for a long time remained a kind of cult joint patronised by the city's older generation who liked the sambar poured generously on their idlis from "eversilver" waterjugs. However, the sight of barefoot waiters in stained white uniforms, and its perpetually clogged washbasins, seemed to have kept the new customers away.

Now, visitors to Rathna Cafe can admire its shining granite floors, the smart brown livery of its waiters, and its new location in the more upmarket Panagal Park. When asked about the transformation, their manager candidly admits that it was essential because customers had got used to the standards set by "Meckdonaalds" and "Pissa Huts". Rathna Cafe's story could easily be that of countless other modest eateries in the last decade, in the face of competition from global biggies McDonald's and Pizza Hut.

While Pizza Hut, part of the $9.5 billion Yum! Brands which also owns fast food chains KFC, Taco Bell and Long John Silvers, can claim to have introduced the pizza to vast swathes of middle-class India, McDonald's with annual revenues in excess of $20 billion is the largest fast food chain in the world. McDonald's is often considered a powerful symbol of globalisation, with The Economist magazine using the 'Big Mac index' (the price of a Big Mac burger) as a barometer of purchasing power parity of various currencies in the world.

This year, when both McDonald's and Pizza Hut celebrate 10 years of their presence in India, the swadeshi apprehensions about the Americanisation of India seem to be misplaced. Far from altering the eating habits of Indians, these two quintessential symbols of American consumerism have not only acquired a strong Indian flavour, but also enabled consumers in urban and semi-urban India to demand that their local restaurant chains drastically improve hygiene and service standards. In the last 10 years, the McDonald's chain in India has grown to 91 restaurants primarily in the north and west , while Pizza Hut operates 125 outlets in 32 cities across the country.

The visual similarities between a McDonald's outlet in Manesar and Minnesota would perhaps be limited to the the Golden Arches and the figure of Ronald McDonald. "Nearly 70 per cent of the items on our menu in India don't exist elsewhere in the world," says Vikram Bakshi, MD (north), McDonald's India. It would be impossible to find a Chicken Tikka Burger or a Paneer Salsa Wrap at any McDonald's outside India. On the other hand, the company's global bestseller, the Big Mac Burger, is excluded from the Indian menu because it is made of beef. In fact, India was the first market in the world where McDonald's kept away from beef and pork, for obvious cultural reasons. Its cultural sensitivity is also evident during the navratras, when the company also includes in its menu food items sans onion and garlic. "For Indians, McDonald's doesn't carry any cultural baggage, and in many ways it is perceived as a happy place, a good side of American consumerism," says Santosh Desai, president, McCann Erickson India, an ad agency.

"India is an extremely value-consious and non-homogeneous market," says Arvind Mediratta, chief marketing officer (Indian subcontinent), Yum! Restaurants. "If our consumers want Indian flavours, we have to give it to them. After all, we're not selling assembly-line produced cars, but selling food." So, Pizza Hut has a new 'Indian' menu which includes kebab lollies on breadsticks, pindi chana pizzas and pista kulfi.

Overseas, McDonald's attracts criticism from health activists who target fast food chains for serving "junk food" known to cause obesity. In India, though, McDonald's has so far escaped the anti-MNC brigade that once attacked KFC in India. "Internationally, consumers are more conscious of eating healthy food, and McDonald's responded to it by introducing salads, fruits and low-fat food. In India, too, most of our products are grilled or baked," says Bakshi. In India, McDonald's also does something it loathes doing in the West: home delivery.

The arrival of McDonald's and Pizza Hut, with their affordable prices, has also encouraged Indians to eat out more frequently and to spend more. Industry studies estimate nearly 36 per cent of the families going out to mid-market casual dining restaurants like McDonald's, Pizza Hut, Haldiram's and Saravanas spending between Rs 200 and Rs 500, whereas five years back, nearly 80 per cent of families frequenting such places would spend less than Rs 200.

Both McDonald's and Pizza Hut are perceived very differently here than in the rest of the world. Vishal Pandey, an mba, is a marketing manager with one of PepsiCo's divisions, based in Lucknow. On his first wedding anniversary last month, his wife demanded to be treated to a McDonald's dinner in the city's newest hangout, Saharaganj. In the West, not too many husbands would earn brownie points for taking their loved ones to a McDonald's, often pejoratively called a place only for kids and truck drivers. With a McDonald's burger for Rs 20, and Pizza Hut selling a pizza for Rs 50, the products are priced the lowest in India, even after being adjusted for purchasing power parity. "There are different needs for different markets. Elsewhere, we are a brand offering convenience. But in India we're an aspirational brand where 'climbers' or those aspiring to move up the social ladder would want to go," explains Bakshi of McDonald's.

Apart from setting service and hygiene standards, another, more significant, example both these companies have set for homegrown restaurants is in the efficient manner they run their supply chain. The McDonald's supply chain is a global gold standard. In India, the company has developed more than 50 vendors from whom it sources all its ingredients (only the frozen potatoes are imported from Holland because Indian potatoes are high in sugar content; and the palm oil comes from Malaysia). Its state-of-the-art distribution and cold storage centre in Noida near Delhi caters to all its 57 restaurants in North India. Two huge cold storages the size of a hockey pitch are maintained at -22°C to keep lettuce, milk and chicken patties fresh for a few months. Half a dozen refrigerated trucks make up to three trips a week to each outlet to replenish supplies. Inside the restaurant, each burger which is ready to serve is pushed down to the delivery counter with a tag indicating its time of production. If it does not fly off the shelf in 10 minutes, it makes its way to the wastebin.

So, has India been overwhelmed by "McDonaldisation" after a decade under the Golden Arches? Not really, says McCann Erickson's Desai. "The Indian chains have more than merrily matched up to foreign competition. And they are only getting better," he says. Like Rathna Cafe—it might have got a makeover, but its sambar still retains its old-fashioned goodness.