“Maybe Modi Will Go To West Asia In The Coming Months”

Leading experts on foreign policy in Delhi think Modi has brought in pragmatism and energy but he should also engage with West Asia. 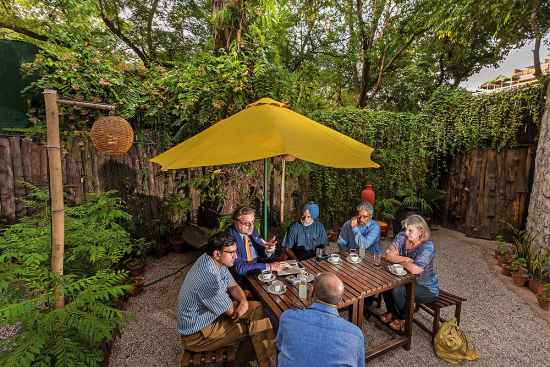 Nestled between Lodhi Gardens of Delhi and the Islamic Centre, ‘Lodi’ the garden restaurant is as good a place as any in the capital to get a group of leading exp­erts started on a discussion on foreign policy. The leafy shades of the surrounding trees and the birdsong create the ambience of the famous garden next door. Our five panelists arrive on time—a bright 5.30 in the evening—and we get into our discussion. So how has Prime Minister Narendra Modi fared in the first year on the foreign policy front?

“It is foreign policy with Gujarati characteristics,” says C. Raja Mohan of the Observer Research Foundation, to emphasise the pragmatism Modi has brought in India’s engagement with the world. To drive the point home, he tells the story of a man who claimed bef­ore the king that he will make his horse talk. When his worried wife asked him how he can do this, he argued that in one year’s time anything was possible. “In one year, the horse may die, or it is possible that the king may not live that long and with a bit of luck, who knows, even the horse may talk.” The moral, says Raja Mohan, asks: why wait for tomorrow and do nothing? “Make the most of opp­ortunities, develop your capabilities to deal with challenges that may come your way.”

There is agreement in the panel that Modi has brought a vigour, energy and pragmatism that was lacking, especially in the past two years. Much of this perhaps stems from the majority he enjoys in Lok Sabha—something that many of his predecessors lacked.

For Centre for Policy Research’s Srinath Rag­h­avan, Modi’s handling of relations with both the US and China has been impressive. “When the US president was here, he came out with a joint statement on the Indian Ocean, but when he went to China...