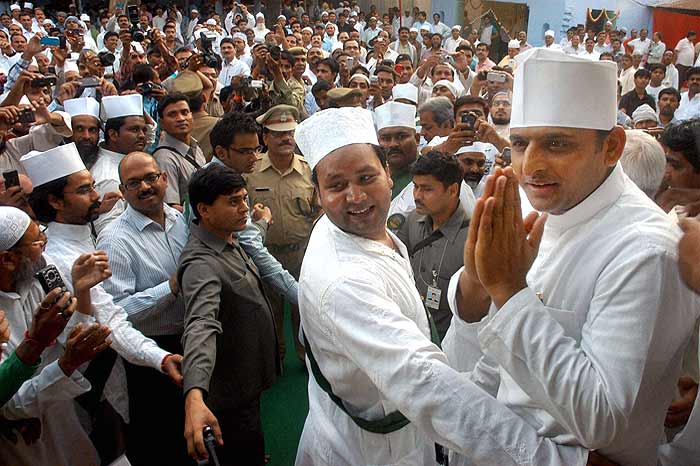 Among the factors that critically added to the Samajwadi Party’s huge win in the Uttar Pradesh assembly polls was the Muslim vote. Now that Mulayam Singh Yadav and son Akhilesh are nursing hopes for Delhi, come 2014, they want to tighten their hold over this crucial 19 per cent of the population. One of the ways they are doing this is by promising to look into cases of young Muslim men arrested on terror charges, which many believe to be routinely fabricated by the police. It’s critical for the party to appear to be doing something for the community, for it really may not be able to deliver on the election promise of 18 per cent reservation in jobs. Mulayam, who earned the name ‘Maulana Mulayam’ after he ordered police firing on a procession that stormed the Babri Masjid when he was chief minister in 1990, would certainly not mind being cast in that mould again, for he knows that with the community behind him, he could well block a Congress comeback in the Lok Sabha elections. It’s Mulayam doing what his big rival, Mayawati, has done with the Dalit vote.

But will it work? After all, there are many seekers of the Muslim vote in UP: the Congress, for example, had bent over backwards to reach out to Muslims in the assembly polls. Its inept attempt—high on symbolism and desperate rhetoric—failed to convince the community. Fearful that votes split at poll time wouldn’t be pooled back together during government formation (because the Congress wouldn’t back the SP), they voted almost en bloc for Mulayam. What also worked in his favour was the return of old party hand Azam Khan, which brought closure to the embarrassing phase of his dalliance with Kalyan Singh. As for policy, Mulayam had repeatedly sought the implementation of the Sachar Committee report, which calls for reservations for Muslims, treating the entire community as backward. Doing it while in government, of course, isn’t as easy. So the father and son have come up with something to assuage the community’s sense of being wronged. “We are committed to withdrawing cases against Muslims falsely implicated in terror cases,” Akhilesh declared recently.

“There must be objectivity in any decision on freeing young Muslims in terror cases.”
—Dr Mansoor Hasan

The home department is preparing a blueprint, though it’s still not clear how many Muslims have been jailed in terror cases. But a senior aide of Akhilesh says the CM is firm that “a roadmap for their release be chalked out”. Whatever the numbers, such an action is bound to have an impact. “We’ve been demanding this for a long time,” says Manzoor Alam, spokesman for the Milli Council. “We’re glad someone is ready to listen to us.” The All-India Milli Council recently brought out a 492-page publication, ‘Scapegoats’, with write-ups on youths being held falsely on terror charges. Says Alam, “I’m sure Mulayam and Akhilesh will honour their commitment to withdraw false cases against Muslim youth, and initiate action against cops who implicated innocents.”

Will it be easy to get ratification from courts in cases that are subjudice? Zafaryab Jilani, additional advocate-general and convenor of the Babri Masjid Action Committee, says, “In fact, most of these cases can be resolved on the basis of reports from district magistrates. Where necessary, of course, we’ll have to appeal. But I don’t think these things should be a problem once the government takes a policy decision.” 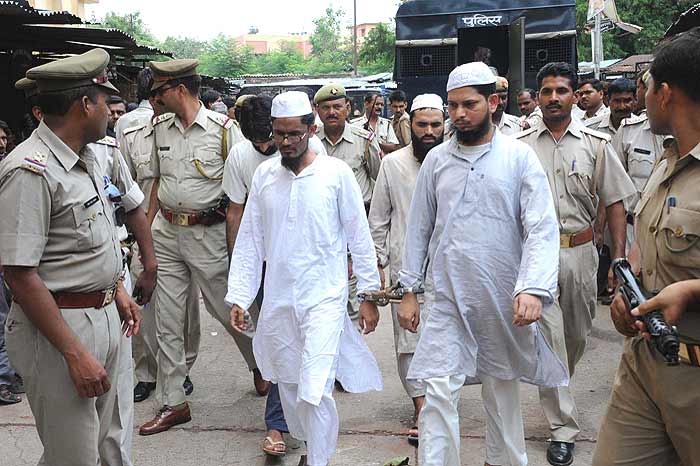 Suspects in a terror case. (Photograph by Pawan Kumar)

Given the emotions terror cases tend to raise, no one is keen to make out that all persons held in such cases have been falsely implicated. Even so, with our slovenly policing, compounded by stereotyping and prejudice, there’s strong ground for the belief that most of those being held are innocent. Corrupt cops often pick up petty criminals or even total innocents and extract bribes by threatening to book them under serious charges, including terror charges. “It’s not just greed on the part of policemen, there’s also the communal mindset,” says Maulana Khalid Rashid, the Naib Imam of Lucknow and head of Firangi Mahal, a well-known seminary. “The government should set up a commission to identify instances of false implication of youths in terror cases. I’m sure this will go a long way in establishing the credentials of the Akhilesh government with the Muslim masses.” Rashid is also impressed by another Samajwadi Party promise—that of ensuring better representation of the community in the Uttar Pradesh police.

Akhilesh is backing it up with other measures too. Among them is a special provision for paying Rs 30,000 ex gratia for Muslim girls clearing high school and seeking admission to Std XI. Besides, boundary walls will be built around graveyards to prevent encroachment. He sees no logic in limiting such gestures to the poor. “Just as we didn’t set conditions for distributing laptops and tablets to all students—they are for all—we did not wish to discriminate on the basis of economic background here. This special gift is for all Muslim girls.”

As for making a political decision on terror cases, there are a few voices, even in the community, that speak out for caution. “It’s a tricky ground,” says Mansoor Hasan, former head of the cardiology department at the King George’s Medical University, Lucknow. “Therefore, the administration must observe complete objectivity and transparency in any decision on the release of the arrested youth. If the government were to be guided entirely by political objectives, it would not only set a dangerous precedent but also give communally motivated political rivals a handle.”

That could complicate matters for Mulayam. Already, the spat between new friend of the party Ahmed Bukhari, the Shahi Imam of Delhi, and Azam Khan has come as an embarrassment. Many people wonder why Mulayam is at all trying to appease the Imam, who doesn’t even have a strong base in Delhi despite his presiding over the Jama Masjid. Mulayam is a shrewd player, but in his second taste of success, and a desire to keep the flock together, he seems to have made some bad choices.