Politicians keep the campaign low-key fearing the people's ire. And it looks like a hung assembly. 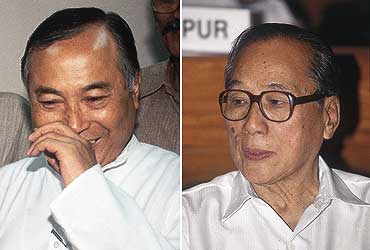 outlookindia.com
-0001-11-30T00:00:00+0553
The public anger against them and their parties, as displayed in Imphal on June 18, 2001, when the state assembly building was burnt down by a rampaging crowd, refuses to go away from the collective memories of the politicians in the northeastern state of Manipur. As a result, most contestants in the upcoming state assembly polls slated for February 14 and 21 are keeping a low profile, lest the people's wrath boil over again.

Public anger had come to the fore on two counts: the insensitive handling of the extension of the Naga ceasefire to Manipur and the continuous squabbling the politicians indulged in to grab power after President's rule was imposed less than two years after the state assembly was elected in February 2000. Now former friends are fighting as foes in an election that comes at a time when the state is completely bankrupt and the people's confidence in the political class at an all-time low.

Two key NDA constituents at the Centre—the BJP and the Samata Party—are ranged against each other while the Congress, still led by former chief minister Rishang Keishing, is looking desperately to make a new beginning. Since no party is confident of getting a majority on its own, power equations in the state will become clear only in the post-election phase.

Indeed, change of loyalties overnight has been part and parcel of Manipur politics for some time now. Allies become enemies and sworn rivals join hands merely to share power. As one Congress politician puts it, "Ideology has no place in Manipur. As long as the ends (of achieving power) are met, all means are justified." Take the case of Radhabinod Koijam, the last chief minister before the assembly was dissolved. He was a Congressman all his life before he along with 11 of the 12 Congress MLAs defected and joined the Samata Party. Koijam enjoyed the outside support of 23 BJP MLAs but in less than three months, the BJP pulled the plug and the Koijam ministry fell.

To gauge the extent of the flip-flop defections, one has to only compare party positions immediately after the assembly elections and when it was dissolved. After the elections in February 2000, the BJP and Samata had seven MLAs between them. The Congress had 12 legislators and the single-largest party in the 60-seat assembly was the Manipur State Congress Party (MSCP), led by W. Nipamacha Singh, with 23 MLAs. Nipamacha Singh duly formed a government with the support of smaller parties like the Federal Party of Manipur and independents. In less than a year, he was ousted by Koijam, who crossed over with 11 of the 12 Congress MLAs to the Samata. Simultaneously, the MSCP split and 20 MLAs joined the BJP, taking the party's strength to 26.

Koijam himself did not last more than three months. Now he's hoping to once again stitch together another coalition, this time sans the BJP, and come back to power. Meanwhile, the latter, largerly seen as the villain of the piece on both counts (pulling down the Koijam ministry as well as extending the ceasefire with the Naga rebels without taking the sensitivities of the Manipuris into account), is in a shambles. A new regional political formation, the Democratic People's Party (DPP), has come to the fore but most anaylysts once again expect a hung assembly.

Public anger has made the politicians wary. So there have been no major political rallies. Campaigning has been largely limited to door-to-door contact programmes. Even here, the candidates in the fray have had to face a volley of sharp questions from the angry electorate.

All the political parties, aware of the groundswell of resentment over the ceasefire issue, have vowed to protect the territorial integrity of the state, at any cost. The fear among the Meiteis (majority of the Manipuris) is that the Centre may give away a part of Manipur to the Naga rebels as a sop to remain within the Indian union.Meanwhile, while the political parties are concerned about public anger, the administration, led by Governor Ved Marwah, is concerned over the security scenario. With nearly 18 militant groups active in the state and less than 30 paramilitary companies at his disposal against a requirement of 294 companies, Marwah and his advisors have a big task ahead ensuring a violence-free poll.

Says chief electoral officer D.S. Poonia: "We are very concerned over the lack of adequate troops for the election. With the existing level of troops, it will be difficult to conduct the polls in a safe and effective manner." Already several of the candidates have been attacked and their houses torched in the very low-key run-up to the polls. Even so, as D-day approaches, senior security officials can do little but keep their fingers crossed.