Matters Came To A Bull’s Head

Angry fires raged across Tamil Nadu when the SC banned Jallikattu. This account tries to find out the reasons for this spontaneous outpouring of raw emotion. 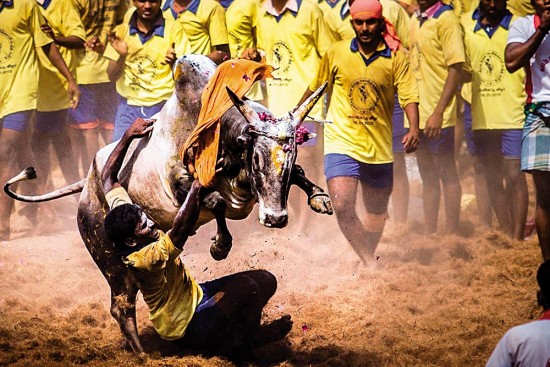 In January 2017, Tamil Nadu had its largest show ever—the Jallikattu protests on Chennai’s Marina Beach and across the state. What started off as a leaderless protest quietly got hijacked by groups preaching Tamil separatism. Once the main demand of staging Jallikattu was met and the protests lost its focus, organisers ended it with a violent clash with the police.

But the demonstrations underlined that a people’s protest on the lines of Anna Hazare’s anti-corruption rally and the Nirbhaya agitation could be staged in Tamil Nadu even on a non-people issue like Jallikattu. Journalist N. Sathiya Moorthy, a researcher with the Observer Research Foundation, has attempted to peel through the layers of the protest in this book. Unfortunately, for someone known for his erudite analysis of South Asian politics, he has only scratched the skin of the bull.