The irreverence, the impertinence, the subversion! Left my head in a delectable whirl. 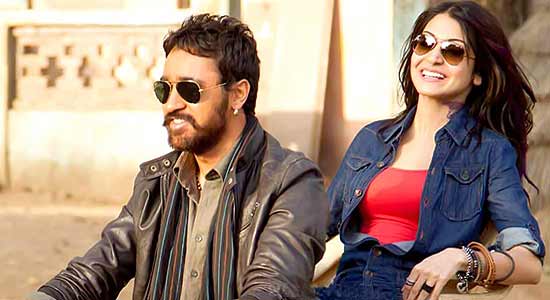 The irreverence of Matru Ki Bijli Ka Mandola starts prior to the film. The prelude song, Khatra, plays on the anti-smoking warning that is mandatorily spr­ead across the screen. What was, ostensibly, written to inform the public of the ill effe­cts of cigarettes sends out a dissenting mess­age.

Gulzar is riotously tongue-in-cheek as he takes the mickey out of the ridiculous guideline by drawing attention to some banal everyday hazards: the dangers of eating popcorn or roaming about on the streets. It is left to us to read between his loaded lines and the hilarious English subtitles on screen.

This impertinence and subversion move on to the film. Matru, like Peepli Live, brings the farmer back into a Bollywood film. Nothing much seems to have changed for him since Mother India. Then, it was the zamindar; in Matru, it is the capitalist-politicians who are the villains, acquiring agricultural land illegally for their factories, turning the green fields into SEZs. What makes Matru distinct is the way Bharadwaj, quite like Gulzar in Hu Tu Tu, employs the heightened idiom of street theatre in presenting the social issue with the accompa­nying folk music also singing of people’s rights and revolution.

His audacious attempt is to hold up ideology and politics by using cinema as an agitprop tool, but self-mockin­gly. What matters isn’t the depth of his argu­ment, but the zeal, fervour, act­ivism and the apparent chaos and indiscipline that is refle­cted in the seemingly incongr­uent narrative, which swings between the real and surreal, inc­orporating quirky elem­ents that range from a Zulu tribe to a pink buffalo and the curious mix of lingos—English, Hindi and Haryanvi.

On top of this are some whacky characters, like the bumbling cops who want to arrest “Mao” because they are “Mao se tung” (tired of Mao), broad farce and slapstick groun­ded in earthy hum­our (the chopper and well scenes!) and some upro­arious lines like the one “Mao” is greeted with by a dictio­nary-wielding villager, “Ni Hao Mao”, or a transvestite berating the wicked villagers with “Ghar mein Mao-Lenin na se.”

It could be bewilder­ing, at times exasperat­ing even, but the film’s mainstay is this intrinsic anarchy. The mess on screen is no different from the madness all about us. The pivot is Harry Mand­ola (a superb Pankaj Kapur). His alcohol-induced schiz­ophrenia mirrors our nation, hanging between the schisms of the sprawling malls and the shrinking fields, between remnants of yesterday’s socialism and today’s in-your-face consumerism. It’s about stretch limos colliding with the small “thekas” of “desi sharaab”.

I came out with my head in a delectable whirl and a week later am still thinking about “commie bastards” and “bourgeois bitches” and wondering “revolution kab aayega?”