This must be the biggest letdown in cinema history 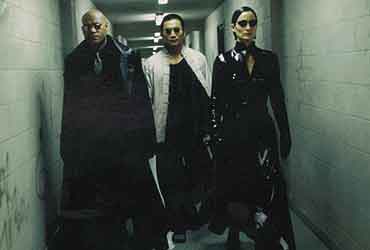 This must be the biggest letdown in cinema history. First came The Matrix with its mind-warping premise, then The Matrix Reloaded, brimming with spellbinding special effects and action sequences, and now this jaw-droppingly bad finale. Quite simply, Matrix 3 sucks. Dyslexic in conception and execution, almost nothing seems to work in this film. The screenplay is weak, the dialogue with all its vacuous pop philosophical bullshit is laughable, the pacing totally awry (there are long pointless stretches that are plain boring), the Machine City sets lifted from Alien, the symbolism both tired and heavy-handed, the action sequences either tedious or inadvertently comic (the ritual big-ticket Neo-Agent Smith fight actually comes out funny), and the denouement stupid, anticlimactic and illogical. To be fair, though, the actors seemed to have figured out that something was going awfully wrong. So Keanu Reeves wanders through the film like a zombie. Same for Laurence Fishburne and Carrie-Ann Moss who just hangs around looking like Yoko Ono with muscles.

What on earth were the Wachowski brothers thinking? The much-hyped massive battle sequence in Zion between humans and sentinel machines is so long with the same things happening over and over again that you just wish they would fast-forward the damn thing so we could all go home. And the worst insult of all: as the end-credits roll, a heavily American-accented voice starts singing from the Rig Veda: Tamaso ma jyotirgamayah etc. But the W brothers do perhaps deserve a bit of our sympathy. All they did was make a super-cool sci-fi film in 1999, with ideas stolen from William Gibson's cyberpunk novels, but every woolly-headed pseudo-intellectual of every denomination went to town spouting theories about the Matrix's philosophy and metaphysics, and is Neo a Bodhisattva, or is Descartes am, did Plato write the screenplay and so on. As a result, the poor Wachowskis, former comic book writers, got some rather overblown ideas about themselves and bit off more than they could chew, digest, regurgitate. The outcome of this unfortunate self-delusion is this trite gobbledegook. So if you are a big Matrix fan, like I am, do yourself a favour: stay away from Revolutions. For, in effect, what the Wachowskis have done is that with this film, they have managed to ruin the trilogy for everyone. Just keep watching the first two. Consider Matrix an unfinished epic.