Maths In A Poll Match

Young Tejashwi makes a soft border-crossing—endorsing his father’s old bête noire Mamata Banerjee in Bengal, and plumping for the Congress (and a few seats) in Assam 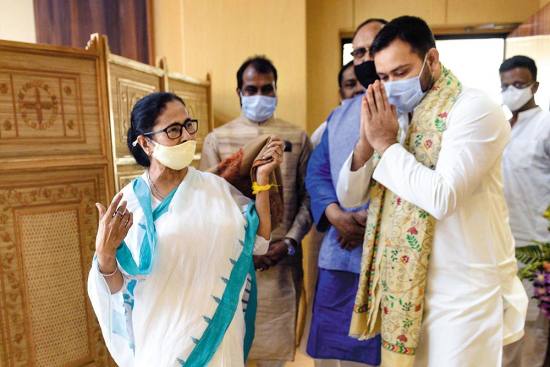 Many trains crisscrossed the Ganga—and the Hooghly—since Rashtriya Janata  Dal president Lalu Prasad Yadav and Trinamool Congress chief Mamata Banerjee crossed swords over the performance of the railways. That was then, when the two were railway ministers in the ten-year UPA rule, each taking turns to head the national transporter. Mamata dogpiled on Lalu since assuming charge in 2009 and belittled her predecessor’s claims of a phenomenal turnaround in the cash-strapped railways on his watch as political whataboutery. Lalu disliked her and the feeling was mutual. Cut to 2021, the ailing Bihari patriarch, serving a long sentence for a fodder scam, is firmly behind his once bete noire as she battles a snapping-at-the-heels BJP in the West Bengal assembly elections staggered over eight phases this March-April. Forged on old anvils, they have a common axe to grind—much like my enemy’s enemy is my friend.

The imprisoned Lalu deputed son Tejashwi Prasad Yadav to meet Mamata in Calcutta and extend the RJD’s unequivocal support to her. “It is Laluji’s decision. Our first priority is to stop the BJP from coming to power in Bengal,” the 31-year-old Yadav leader said after meeting Bengal chief minister on March 1. Mamata reciprocated Tejashwi’s gesture. Recalling her ties with Lalu and their mut­ual respect, she said the RJD president had not been released from jail bec­ause the NDA knew they would lose elections if Laluji is out and about. “When we are fighting, it is brother Tejashwi who is fighting. We are tog­ether,” she said, dropping ample hints that the RJD would not contest in Bengal.