A big new contract, a tough new season. The prince is looking to swell his privy purse before he rides off into the sunset. 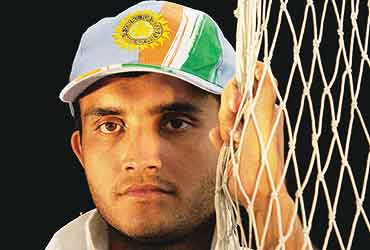 Saurav Ganguly has a big spacious face on which, in an unconfirmed calculation, 500 words could be written in font size ten. Single spacing. That's the only way to read the man. Many who thought they understood him because he called them "brother" or let them stay in his house have been rudely surprised. It's a face that gives away nothing, except during moments like when he took off his shirt to return the compliments of a misled English lad called Andrew Flintoff.

This grave ponderous face is part of a self-styled mutation of Saurav Ganguly's public image. The one-time spoilt prince is today "an articulate captain" who will bravely answer the favourite Indian question "What went wrong?", and "a thinking captain" who will lead a string of white elephants into a cricket field—not like a disproportionate mahout but an authority as large. Ganguly is the first Indian captain to have made himself a force that need not essentially bat or bowl well but just be. It's a time in his life that should fetch him maximum endorsement money for the next phase is called retirement. "Everybody has to earn," he says.

But his agent Percept D'Mark missed the point.

Before his three-year contract with Percept ended in September this year, the firm's CEO Sanjay Lal made a plan for him by which, according to market estimates, Saurav would earn about Rs 30 crore in the next five years. World Sport Nimbus made an offer close to Rs 45 crore for the same period and not Rs 60 crore as initial media reports suggested. Nimbus' co-chairman Harish Thawani officially denies he ever made an offer to Ganguly but it's true that he did. As Sanjay Lal says with a mild snort, "everybody knows".

Ganguly entered into negotiations with Thawani six weeks before his contract with Percept was to end. That was breach of contract, but Ganguly is a man who puts constructive...