It's hard to beat India in India. But we are now back to our winning habit. 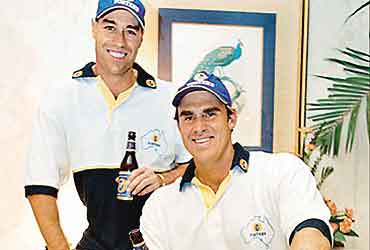 outlookindia.com
-0001-11-30T00:00:00+05:53
One week into the TVS Cup and we are pretty happy with the position we are in. It's still early days in the competition, but I think we will improve even further with every game. Last week, I had mentioned that we were coming straight from a Test series into this one-day tri-series without any break and with no time for practice. While we would not like to use this as an excuse, it does take time to get used to conditions as different as these when one is fresh from a Test series. However, we coped pretty well and showed no signs of travel fatigue, and our performance at Faridabad on Wednesday proved that the entire team has got into the winning habit.

I thought we did get quite a few things right in the Gwalior game itself. We bowled and fielded pretty well, and even when we began to chase, we were in front of the run-rate for more than 20 overs. Unfortunately, we lost our game a bit after that, and as a result, couldn't quite close out the match. However, we did get a lot out of the game, and it is important that we learn from our mistakes ahead of the next game against India in Mumbai. We know it is hard to beat India in India, and it is important that we learn our lessons quickly. In Gwalior, I think we tried to do too many things too soon against Harbhajan Singh and Anil Kumble. These are bowlers who revel in home conditions, and it takes some time for even the best batsmen to read them. Instead, we tried to attack and score boundaries off them when we could have been a little more circumspect. We were scoring at a healthy rate when they came on, and could have slowed down a bit after we lost a wicket.

Perhaps, we will have to rethink this gameplan a little to focus instead on playing the ball down the ground and settling for ones and twos during their spells. Patience will be the key to handling these guys from here on. If we milk them for 35-40 runs apiece in their spells, we would have done well. Our bowlers have hit the deck from the first game itself, and this should give them confidence for the future games. They have also been well-supported in the field—Damien Martyn's catch at Faridabad is as good as any you would see. I was happy with the way Nathan Bracken hit the deck from the first over at Gwalior itself. Brad, who is playing his first series in India, has also proved to be a quick learner and along with Andy Bichel, has ensured that we don't miss our regulars all that much.

Faridabad was a better outing for us in conditions that really suited us. One does not expect to see so much grass on a wicket in this part of the world, and I guess both team were a little surprised by it. It was a good toss to lose because, quite honestly, I did not expect the wicket to do so much for so long. Had I won the toss, I would have probably batted first as well. So one can't really blame Stephen Fleming for taking the wrong decision. Of course, batting was most difficult in the morning because of the 9 am start, as the air was hazy and heavy, but our bowlers used the conditions beautifully to put the Kiwis on the backfoot. There was movement off the seam and swing, so Bracken, who gave a good account of himself in Gwalior, really came into his own in more familiar conditions. He was particularly impressive in his opening spell and got able assistance from Brad Williams at the other end.

Gilly and Haydos gave us good starts in both matches and this augurs well for the team. The openers always play a crucial role in the subcontinent and it is good to see them hit the ball sweetly. Our number three, namely yours truly, has to do some work on the batting front. It is essentially a question of spending some time in the middle so that I can come to grips with the conditions here. One down is a crucial position in the team, and it is imperative that I get among the runs ASAP.I did not do too well when I was here last time, so I would like to use the remaining matches to set the record straight.

We've been ensuring that we also move away from the game every once in a while. Haydos' birthday on the day of the Faridabad game provided a great opportunity for the team to come together and spend an evening. We were all in buoyant spirits after our convincing win and gathered for a couple of drinks at the hotel bar. We also had a good old-fashioned birthday party in the team room where Haydos blew out 32 birthday candles and cut a birthday cake. It has been a truly memorable year for him, what with the world record and the constantly improving batting average. Hopefully, this year will also see him setting up new milestones and contributing to the Australian cause. It was a nice quiet evening, and a well-earned break after a pretty hectic week. We have ventured out of the hotel whenever time permitted. In Gwalior, we were happy to witness the fireworks and colour of Diwali. I had come to India a few weeks ago and had witnessed Mumbai's biggest festival, Ganesh Chaturthi. I had walked around a bit to soak in the festivities in Mumbai and the city really looked transformed and colourful for the occasion, with some large, impressive idols on show.

We now move to Mumbai, a venue where we have had some good games in the past. During our last tour, we won the first Test in Mumbai in a little over three days, while in the 1996 World Cup, we scored an impressive win over India at the same venue. A team's history at a venue always helps a team mentally, and since I have memories of being part of both those games, it gives me plenty of confidence. I also think that we are now well-acclimatised and will be able to fare better than we did in our first game against India. I was not too disappointed by the way we played in Gwalior, so I feel pretty confident about meeting India again. There will be a huge crowd, a lot of noise and great expectations from the home side. The hype around our games against India is pretty huge, but that is to be expected after the World Cup finals.

However, on the field nothing has changed since our sides have always been involved in close, exciting games, especially over the last three-four years. Our series here in 2000-2001 was one of the most closely-fought ones I have been involved in, with the fate of the series hanging in the balance till the end of the final Test. So while the world is building up Australia-India clashes these days, we have had good contests between the two sides even before the World Cup.