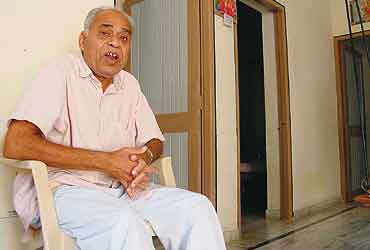 outlookindia.com
-0001-11-30T00:00:00+0553
Effective governance, sustainable development, micro-economics. When such words are touted, debated and analysed in the seminar circuit, they rarely translate into action on the ground. But Naginbhai Patel, former senior research associate at the Indian Institute of Management (IIM), Ahmedabad, is no armchair thinker. He believes that action speaks louder than words.

So when he called it a day at the iim, he decided to go back to his village, Maasar, some 45 km from Vadodara. Patel was not at all happy with what he saw: "I was pained to see the women of the village queuing up for drinking water from midnight till 2 am. That was the only time they got water. The reason was the low horsepower water pump. There was a tubewell, but it didn’t work," he recalls.

All his life, Patel abhorred politics. But he realised he had no alternative but to get into politics if he had to sort out Maasar’s problems. So he stood for elections and became the village sarpanch. Within eight months, Patel ensured there was regular water supply for six to seven hours every day.

Not just making the official machinery work, with Patel around, schemes announced by the government are actually being implemented at Maasar. Patel ensures that happens. The latest project under way is an underground sewerage system, work on which has been approved and will start soon. "There has been a small disagreement here with some villagers saying the road network in the village should develop first and then the sewage. That is why the whole village will not be covered by the system, but half of it will benefit. My argument is that even if you have pucca roads in the absence of a gutter system, domestic wastes and water will create dirt and filth in the village. Secondly, the money spent on the roads would have no meaning when they would be dug up to lay a sewage system in the future," Patel points out.

He is sad that even the implementing agencies at the grassroots level don’t understand such simple facts that development of roads and sewerage systems are complementary to each other and not independent, stand-alone works. This, he says, is because of two reasons: corruption in awarding works for the same projects repeatedly and absence of middle- and senior-level officials while making on-the-spot pre-allocation. "When we conducted research on important issues at the iim, we ensured that at crucial stages qualified persons and senior professors would make field visits. This does not happen with government schemes, especially at the rural level. This despite our politicians saying that 70 per cent of India lives in its villages," says Patel.

With a Masters in Economics and a PhD thesis on ‘Input and Productivity in Agriculture’, which was later published by India Book House, Patel has a right to such opinions. His ‘crusade’ to develop his village and showing the government machinery how to do its job effectively has also been noticed by the Vadodara district development officer, R.C. Meena, who has asked his juniors to consult Naginbhai on important policy initiatives.

Meanwhile, after regular water supply and the underground sewerage systems, next on Patel’s agenda is to have overhead water tanks constructed in the village and to launch a campaign to create health and hygiene awareness. He does not want the government to oblige Maasar with some new mega scheme that may not go beyond tokenism. "The right implementation of existing schemes and transparent spending will do the trick, village by village, town by town. But the people would also have to be alert," Patel smiles. He knows the management skills he taught at iim are now being practiced in an intimate domain far from lifeless seminar halls. He can be contacted at: Naginbhai T. Patel, Sarpanch, Maasar, Taluk Padra, District Baroda; Phone: 02662-237142.

The First Line Of DeFence