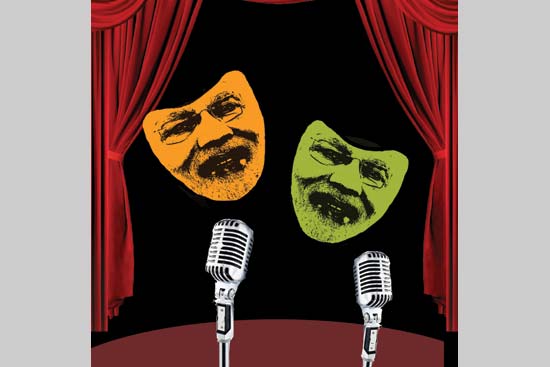 There is something disturbingly strange about a prime minister of the world’s largest democracy failing to speak in his own country’s Parliament and then giving a chest-thumping speech outside Indian shores. By chest-thumping, I mean he thumps the table and puts his hands in the air while the faithful and nris thump their chests and get terribly excited on social media. They truly imagine that people are awe-struck and so they send intelligent and well-phrased tweets such as ‘burnol, burnol, burnol’ or ‘jealous, jealous, jealous’ (besides the usual swear words that Modi bhakts put out in battlefield internet).

But this piece is not about those who love Prime Minister Narendra Modi and because of that passion choose to spread some hate around.

It’s about how bizarre the Modi prime ministership is turning out to be. Consider his ‘Madison Square Garden moment’ at the Dubai cricket stadium where Modi addressed a huge gathering of Indians. The Indian PM himself tweeted: “Electrifying is an understatement to describe the atmosphere at the Dubai cricket ground. A big thank you.” And so he went on to speak forcefully in a sheikhdom where democratic rights can be hard to come by, where an Indian can work for his entire life and get no protection. Still, the sheikhs made their gestures and gave the Indian visitor the bragging rights over securing permission to build a temple, plus a joint position on fighting terrorism. A rejuvenated Modi returned to make a very aggressive speech in Bihar and throw the promise of lots of moneys in the direction of the election-bound state.

There is nothing out of the ordinary about heads of nations travelling across the world to democracies and dictatorships promoting the interests of their country. The problem with the Modi prime ministership is that the foreign ‘gig’ appears to be a stand-in for non-performance at home. Back home, it’s as if he has run out of slogans, the ideas have fallen flat and it’s the end of imagination for him now that he’s become PM. Let’s face it, even the enthusiasts have had a hard time figuring out what to describe as ‘inspirational’ or new or even particularly interesting in the very long Independence Day speech that we heard. Start Up India? Seriously? The only charitable thing one can say is that it shows a greater realism. From Make in India (last year) to Start Up India suggests that Modi has either given up on acquiring land for factories or realised that it is terrible politics to appear to do so.

Indeed, the changing position on land acquisition appears to be the only stepping back that the Modi regime has done. On all other fronts we have a display of stubborn power that is actually keeping the regime from moving on any front. They are shouting to stand still. In the cacophony of debates and the hurling of party statements, it appears to be a tweet for tat that derailed our Parliament during the just-concluded monsoon session. But at the core of it was a ruling party that did not reach out to have any dialogue with the Opposition. The question of Sushma Swaraj’s resignation was central to the logjam and those who cover Parliament know that the political class was baffled as to why she was not ‘encouraged’ to step down temporarily. Bashing the already battered Congress was unintelligent if the purpose was to get the House on track. Yes, the Congress was unreasonable in its sweeping demands as Oppositions are wont to be. It is always the job of the ruling party to search for a reasonable solution.

The Modi government did not do so. One can therefore surmise that no value is given to what lies at the core of issues such as corruption, conflict of interest, judicial and parliamentary accountability. Delhi’s rulers appear to believe that might is right, the only problem being they have discovered limits to theirs. They also appear to believe that it’s all about the statement, the posture, the optics, foll­owed up by choreographed theatre in foreign lands. The Bihar package has been announced just because an election is round the corner, while no money has yet reached Jammu & Kashmir, which simmers with dangerous tensions and was also promised a special package. This reveals the lack of any genuine concern for anything beyond electoral gain.

There is also a weird disconnect in what can be seen in attempts to appear more inclusive. When Modi travels out of India, he visits mosques (in UAE) and talks of our shared Sufi heritage (in Central Asia last month) but returns to even break the tradition the second year in a row of an Indian PM always attending the Iftar hosted by the President of India. It has traditionally been a courtesy shown to diplomats from Islamic countries and a few prominent Indians and Modi have pointedly chosen to never be part of this ritual.

Such rituals could be dismissed as superfluous but since it’s all just theatre, the props and symbols do matter in the universe where Modi is the star act.