Massacre Of Delhi’s Trees In The Name Of Development

About 11,000 trees had already been cut—fallen soldiers in a grim battle with ‘development’—before the Delhi High Court moved in with a last-minute stay on June 25. 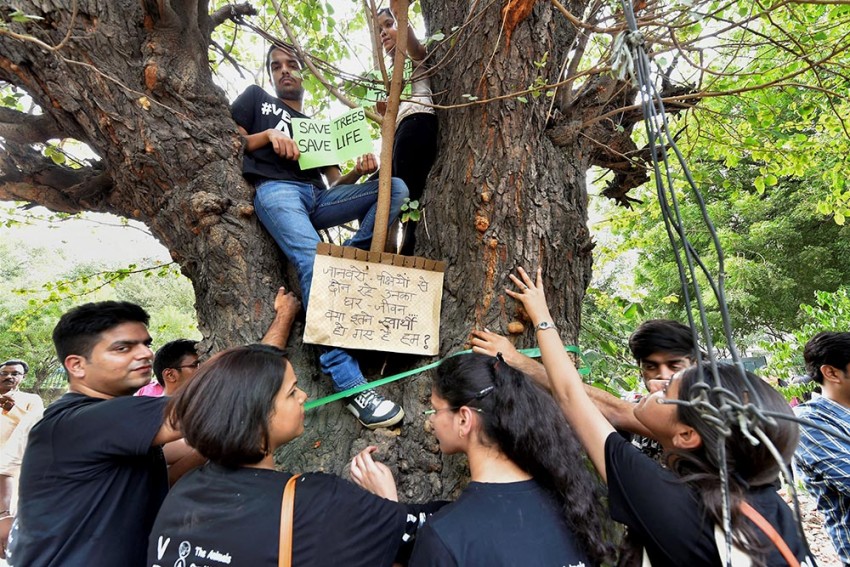 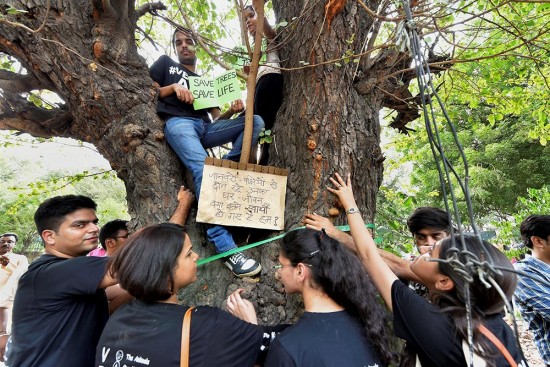 The abundant verdure that’s a signature of the Delhi aesthetic—especially the parts that run along a north-south mer­idian, including the planned city at its nucleus—is facing a threat. Seven ageing but genteel colonies on the southern fringes of Lutyens’ Delhi are encumbered with fancy new development projects. All of them boast lush green vegetation, and ‘redevelopment’ means sacrificing 16,500 full-grown trees.

About 11,000 trees had already been cut—fallen soldiers in a grim battle with ‘development’—before the Delhi High Court moved in with a last-minute stay on June 25. Not only is the threat still alive for the rest, it sets in place a model of unrestrained growth in heritage zones. Thousands of trees felled, that too at a time when Delhi’s deadening smog has made it the world’s most polluted megacity, had naturally raised enough doubts for the court.

Netaji Nagar, Nauroji Nagar, Sarojini Nagar…it’s a litany of familiar names. For decades, they made for a quiet, green, if a touch drab townscape—quarters for government employees, where a few generations have grown up. Now the whole lot is enlisted with big plans—multi-storeyed commercial and residential complexes, complete with mammoth parking bays, to be anchored by the National Building Construction Corporation (NBCC), a Navratna PSU that operates under the Urban Development Ministry.

In times when they are speaking of the desert advancing on Delhi, people look back with nostalgia at the days when human habitation was plotted around greenery. It was natural, then, that citizens were the first to respond. On Sunday, June 24, protesters gathered at Sarojini Nagar, embracing trees, carrying placards saying ‘Mujhe Mat Maaro’, and ‘Don’t cut down a life’. The idea of a mass murder of trees had stirred the generations that had known the shade of the neem, the peepal and the jamun. It was earlier the trigger for a Facebook group to be formed: Delhi Trees SOS eventually spearheaded the campaign.

The citizens’ ire prompted the Delhi High Court to stay NBCC’s plan till July 4, the date of hearing. Is ecocide the only way forward for the city, the court has asked NBCC. As per the Environmental Impact Assessment (EIA), a total of 16,500 trees will be felled for the ‘smart city’ project—11,000 trees in Sarojini Nagar are already felled; 3,003 trees in Netaji Nagar and 1,465 in Nauroji Nagar await the axe.

“Delhi’s aesthetics would completely change with this plan. And pollution is going to worsen,” says Juhi Saklani, an environmental photographer who led the Delhi Trees SOS campaign. “It’s suicidal,” says environmental lawyer Aditya Prasad, gloomily. In the winter that passed, Delhi witnessed heavy smog that literally went off the charts; it’s been a perilous summer too.

As for aesthetics, passers-by these days would see the rare sight of a city in transition. The old quarters at Netaji Nagar lie crumbled down to the ground. Mean-looking JCBs lurk. Along its avenues, ­gigantic, healthy trees still stand sentinel, lending the flavour of nature to the scene. A tranquility that would be breached by traffic and pollution once the ‘smart city’ comes up.

For its part, the NBCC is aiming for state-of-the-art structures, including basement par­­­king that can handle 70,000 cars. The revamped architecture also plans to incorporate green building features, rainwater harvesting, waste management and a new ‘green belt’. Says an NBCC official, “Utmost care is being taken to protect the environment. Our vision is to develop Delhi in the most planned, sustainable manner.”

Pradip Krishen, filmmaker and environmentalist who has been studying trees since 1995, and part of the Delhi Trees SOS campaign, isn’t convinced. “It sometimes happens that engineers and planners find it easier to create a clean slate—by removing everything—rather than plan around old trees,” he says. “But in this case, their disregard of old trees hasn’t happened bec­ause of laziness or convenience. It’s cynical and deliberate and betrays a complete lack of understanding of why trees are important, useful and desirable.”

Manju Menon, senior fellow for environmental law and governance at the Centre for Policy Research, points to a common sleight of hand. “Tree felling in cities and deforestation in general has been permitted by governments in the name of ‘compensatory forestation’. We are given to understand that this makes up for the loss of green cover and so it’s okay to pursue development that destroys ecological features and habitats. But ­research shows compensatory forestation has been a grand failure.”

Not many are pacified by claims of an ­illusory ‘green belt’ replacing real trees. “The attit­ude is reprehensible and must change. It’s a matter of telling them how to assign importance to old trees. To make their plans factoring in the ­exi­stence of old trees. It’s as simple as that,” says Pradip Krishen.

Government Officers Are Heroes Too