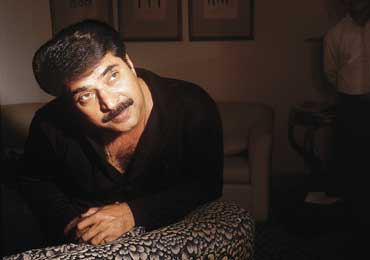 outlookindia.com
-0001-11-30T00:00:00+0553
In the quirky world of Malayalam cinema, a star who shaves his moustache off doesn't remains in contention for long. So, when Mammooty grudgingly accepted the role of Dr Bhimrao Ramji Ambedkar, India's champion of Dalits, and "they so brutally and cruelly took my moustache away", it was a career move. It was a decision that didn't come easy, though it eventually won him a national award.

Film-maker Jabbar Patel first went to Chennai to meet him armed with what Mammooty remembers as "a script that was bigger than the Bible". The star turned down the offer saying that historical figures may be great roles to play, but they have to come with a moustache. Says he: "There was no way I could show my face in Kerala if I shaved." But strangely, the producers of the Malayalam films he was working on agreed to adjust dates and asked him not to refuse Patel's offer. And for a man who is believed to have streaked down the roads of Ernakulam as a college student for a hefty bet, challenges are meant to be taken head on.

So, the prized role, which Patel admits he had first "casually intended for Robert De Niro" went to another improbable man. By this arrangement, Mammooty agreed to give 10 days every month for two years to the film-maker who, of course, cunningly stretched the scheduled to 15 days. All for a good cause. The star gave away his moustache and wore false ones for the Malayalam films. "And for the final stages of Ambedkar's life," Mammooty reminisces nervously, "they shaved my head too."

Since the film was going to be shot in English, the actor had to shed another asset of a thorough-bred Malayalee. His accent. He remembers going to a "certified" English teacher, "who tried to teach me the Queen's English at the rate of Rs 500 an hour". It went from his pocket. He, of course, has forgotten all that he learnt, but he tries to produce some of the expressions he picked up from her when he explains how he felt during the making of Ambedkar.

He has another regret: "Why, oh why, of all the things, they put plaster of paris on my poor face?" After "they" covered his face, "they asked me to sit quietly for a long time and do nothing. I couldn't see, I couldn't hear and I often wondered, though I didn't tell anyone, what would happen if it didn't come off". Strangely, it did come off. Always. Says Mamooty: "These guys were moulding my face, I learnt." Then, "they" put dentures into his mouth. "Dentures in the upper jaw, dentures in my lower jaw. To make my face look chubby. Some words just wouldn't come out from my mouth. I used to just blow out air."

The schedule of the film—shot in London, New York and many parts of India—was so hectic that once, Mammooty sulking in full Ambedkar make-up and period clothes, passed a chit to Patel, saying: "Even I feel like a slave."

Though he says that once the shoot was over he let out a "strong sigh of relief", Patel remembers that all through he was very committed, professional and brilliant. In fact, he looked so convincing that in Nagpur many of the 2,00,000 members of the Dalit community who had been invited to the shooting broke down and wept at the sight of what they possibly believed was a reincarnation of the great man. While shooting a Round Table Conference scene in Pune, Mammooty, who was "taking in some fresh air" between shots, found a professor falling at his feet. A director from Kerala who was chatting with him at that moment asked, a bit shaken, "Have you become that big?"

Needless to say, Mammooty is every inch an actor but the man behind the mask is more interesting.He admits that one character flaws he and Ambedkar shared was sheer arrogance and anger when, as the Malayalee puts it, "we are rubbed the wrong way".

Just as he says that, providence provides us with an example. A clueless journalist walks in, sits by his side and opens the interview a bit stylishly: "Say something about yourself."

Mammooty looks at her and replies: "When you come to meet someone like me, you better do some homework and come. Don't come to me and ask stupid questions. But since you have asked me, I'll answer you. I am an actor. I act in films. I come from Kerala which is in south India. I have got only three national awards." But cleverly, before the girl starts crying, he shifts his gaze elsewhere and changes the topic.

He is very severe when he perceives something as disrespectful. A man tries to talk to him in the hotel's corridor and perhaps for want of an opening line, he asks in Malayalam: "I saw the Hindi version of Ambedkar. Did you lend your voice?" Mammooty shoots back in Malayalam, hoping nobody else understands what he is saying, "Of course I didn't. If you bloody Malayalees can't recognise my voice, it's a matter of great embarrassment to me."

The only burden he ever carries is himself. He believes that the burden of the film is on the film-maker's shoulders. "My responsibility ends with acting," he says. That's why he is not worried if the film will generate controversies. He is characteristically flip when he says, "Let there be controversies. It will make the film sell."

There is potential for a possible flare-up. After discovering that Ambedkar is a Mahar, Gandhi says in a scene: "Oh, I thought he was a progressive Brahmin from Pune." And in another one, Ambedkar calls all mahatmas "fleeting phantoms". The film also captures Ambedkar's mood during the Non-Cooperation Movement. He calls the revolution, "unintelligent".

But with the Chandra Shekar government having put Rs 5 crore, Sharad Pawar (while in the Congress) having lent another Rs 1 crore and the BJP and Shiv Sena pooling in some money, the Rs 8.5-crore film has been blessed by almost all leading political parties. This means that the controversies will embarrass a lot of people.

For someone who brings in so much intensity to all his roles, the man doesn't give too much importance to anything that does not concern him. It's always educating to look at a man who is the epicentre of his own universe. That's why it's difficult to take one's eyes off when he peers into the mirror and wonders why it looks so good. When he looks shamelessly pleased at journalists who praise him unendingly and snubs those who have a difficult question. When he pretends to be interested in the state of the nation. It's this man, Mamukha to those who are perilously close to him, who looks into our camera.

He throws a practised dirty look which in popular language is called attitude. It's a gifted expression that reassures us that it's going to be a great shoot. But when the man shifts his gaze so foul to the photographer, it looks like there is going to be trouble. He picks up a squabble that somehow only a Malayalee can perfect.

"Your flash is not working."
"It's working," the photographer says.
"It's not working," says the man who knows his word is final in much of the Malabar Coast.
"What camera do you use?" he asks.
"F90X," says the lensman.
"That's it? I have not one but two F5s."

Then he takes out his laptop to show off his pictures. At this moment, Dr Ambedkar looks like a distant anachronism. But somehow in the film, Mammooty brings the two timelines together and joins them seamlessly.

She Is The New-Age Granny. One With The Wisdom To Save Modern Lives