Vijayashanti reinvents herself as a Telangana heroine 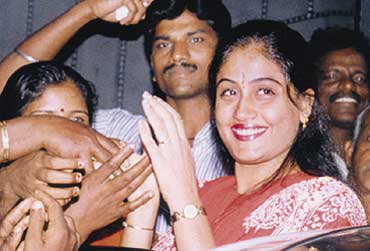 outlookindia.com
-0001-11-30T00:00:00+0553
The sleepy village of Ramannagudem in Warangal district came alive last week after South Indian action heroine Vijayashanti launched her movement for a separate Telangana state from there. A veteran of 200-odd films, she received a rousing welcome from the village she claims as her ancestral home. Later, thousands of onlookers lined the 250-km route from Ramannagudem to Hyderabad for a glimpse of her.

How far she's willing to go to create Telangana is anybody's guess. But for now, Vijayashanti is competition for the other vocal proponent of the separate state theory—K. Chandrasekhara Rao of the Telangana Rashtriya Samithi (TRS). Prior to last year's elections, Rao had made tall promises, but many feel he has failed to make any progress in pressurising the Centre on the issue.

That's where the south's very own 'Lady Amitabh Bachchan' comes in. Her fans know her as the angry young woman of the screen. Now, they'll be waiting to see if she has the same passion for the Telangana movement. "It's not a new political party, it's a peoples' movement. Anybody who believes in the cause is welcome to join me," Vijayashanti, who quit the BJP a month ago, said. She claims there's been an overwhelming response to her "clarion call" and that she's received feelers from many Telangana politicians. In reality though, she is yet to attract any big names to her camp. But there's one party watching her uneasily—the TRS.

It's proving to be a trying summer for K. Chandrasekhara Rao. On the one hand, his party has been hit by a flurry of resignations after a couple of junior functionaries were slayed by the People's War. There's an uneasiness and fear within the party, especially among the more vulnerable lower rung, after the Naxal diktat that the TRS sever links with the Congress by July 15 or "face the consequences". While security for senior leaders has been stepped up (many have moved to larger cities), there is little protection for the ordinary party worker from the Naxal wrath.

Now Vijayashanti is adding to KCR's headache, highlighting his party's slow progress on the homeland issue. It's no wonder that KCR spent all of last week visiting key leaders in New Delhi including Sonia Gandhi, PM Manmohan Singh and defence minister Pranab Mukherjee, who heads the upa subcommittee on the Telangana issue, to muster support.

However, Vijayashanti, though critical of KCR, is guarded in criticising the TRS leader. "The people are unhappy...I too feel it is not right. But if the TRS leaders are willing to resign from their ministerial posts, we can come under one umbrella," she says.

Meanwhile, it's been a mixed response from the BJP about her leaving the fold. It was considered a political coup for the saffron party when she joined it in the late '90s, a time when the party was struggling to establish itself in the southern states. However, many in the party feel Vijayashanti is a spent force and her decision to leave is a blessing in disguise given her list of extravagant demands, including five-star accommodation and chopper rides every time she went campaigning. "People like her have a shelf life, and I am afraid the expiry date on this one is over," says a senior BJP leader. On her part, the former actress claims she was disillusioned by the party's flip-flop on Telangana.

Of all the parties, the TDP, opposed as it is to any division of the state, is unflinching in its criticism of the actress-turned-politician. "Telangana is being used as a laboratory for political experiments. Everybody wants to exploit the issue... and then dump it after achieving their personal agendas," says former tdp minister Kadiyam Srihari.

Clearly, Vijayashanti knows that Telangana is an emotive issue she can capitalise on.Her entry, if nothing else, is sure to add sound and colour to a dormant Telangana campaign.