Plays out as a simple, unpretentious tale that picks up and dramatises important incidents from the champion’s life. 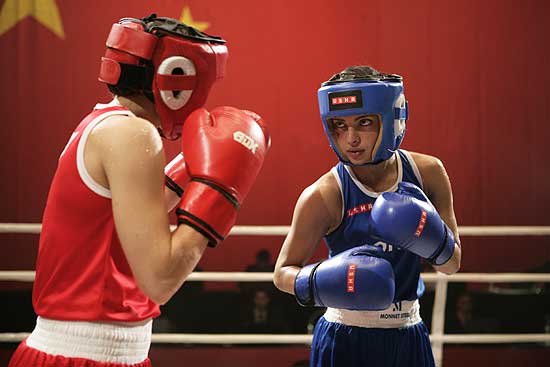 Every Indian, or for that matter any sports film, has some essential tropes and arcs in common—the underdog coming out triumphant against all odds, snatching victory from near defeat, going from disgrace to redemption, fighting the circumstances as well as corrupt officialdom. Mary Kom adds two more layers to it. One is that of gender—how love, marriage and children need not come in the way of any sportswoman’s success. The other is political: how the much-negl­ected Northeast, specifically strife-torn Manipur, is as patriotic as any other state when it comes to playing for India and seeing the tricolour fly high. What is also implicit is that however much it may have given to the Indian sports, it hasn’t been quite as well recognised that it has, in fact, been at the receiving end of  various prejudices.

The film is a biopic of Mary Kom, the most successful and best known woman boxer of India, and shows her journey from being just a ‘fighter’ to an accomplished ‘boxer’. The strokes do get a bit broad at times. For example, in setting up the 2008 Women’s World Amateur Boxing Championships bout (the return of Mary to the sports after eight long years) in the climax. Even while basing it on facts, the director does go overboard in making things over-emotional for the audience and reaching out to the patriot within them.

Largely, Mary Kom plays out as a simple, unpretentious tale that picks up and dramatises important incidents from the...