Cumulative wisdom of nine decades, with the usual mix of irreverence, wit and honesty 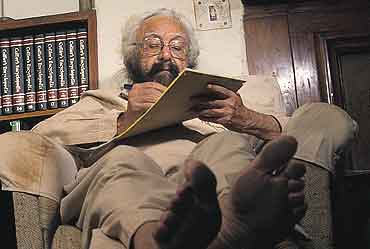 Death At My Doorstep: Obituaries
By Khushwant Singh
Roli Books Pages: 170; Rs 295
Evolution has—it seems—hardwired us to respect those of advanced age. There are scientists who believe that the ability of Homo Sapiens to live for more than a few generations guaranteed the survival and supremacy of the species. Our early ancestors, the Cro Magnon, coexisted in prehistoric Europe with the Neanderthal.

Lurid novels of Cave Bear Clans aside, the beetle-browed and bandy-legged Neanderthal died out after a few millennia for one simple reason: he seldom lived past the age of 30. What that meant, say the authors of this theory of human ancestry, was that each generation of Neanderthal youth had to relearn the hard lessons of daily life—that fire burns, sabre-tooth tigers bite and that certain mushrooms are poisonous.

Cro Magnon clans almost always had oldsters of 50 or more, presumably sitting around the camp fire telling the young how to avoid the thrusting tusks of the Woolly Mammoth or how to sharpen a stone into a spear point. The elderly, in short, are a store of knowledge and experience that not only edify us, but help us live long ourselves.

So when I open a book by the venerable Khushwant Singh on the notion of death, I know I am about to revel in the cumulative wisdom of nine decades of earthly life, tossed in with the usual mix of irreverence, brutal honesty and tremendous wit. Ostensibly a collection of obituaries, Death At My Doorstep begins with a eulogy to his own death, composed in a whimsical moment more than 70 years ago.

It’s hard to imagine a short story written from the dead man’s point of view that can be funny, poignant and edgy, but Posthumous, Singh’s obit for himself, made me laugh and nod with insight, by turns. His spirit, the narrator, hovers over the spectacle of bodily death, in hopes of a grandiose exit replete with respect, mourning and ritual. Instead, the ghostly protagonist watches the way death fits into life. He sees friends and loved ones grieve, then move on, more concerned with their stomachs or their calendars than the dearly departed. The wisdom between the almost frivolous lines of this story—dashed off almost as a bit of doggerel—foreshadow the decades of insight leavened with wit that followed.

For me, Singh has always been on the scene in India, making a massive yet never over-intrusive contribution to life and letters. When I first came here, he was editing the much-missed Illustrated Weekly of India. His novella Train to Pakistan remains the best fiction ever written about Partition. The novel Delhi has been paid the ultimate compliment of flattering imitation by no less than the much-acclaimed William Dalrymple. The gossip and barbed bits of social observation and opinion in weekly columns have punctured politicians and poseurs alike. The long-awaited autobiography, Not a Nice Man to Know, is a model of the genre.

It’s no exaggeration to say that Singh is India’s Mark Twain, a tireless, talented scribe with an uncanny ability to get to the nub of the matter in any era, at any time. I say this with confidence, having just read some of the best obituaries that I’ve ever seen, collected in this book.

The chilling tale of Zulfiqar Ali Bhutto’s final hours still evokes images of an evil act in an evil time. The bloodstains on the long-dead hands of Tikka Khan have not faded with time. The farewell to Dom Moraes is both affectionate and frank about the great man’s few shortcomings, as Singh saw them. Scoundrels, family friends, celebs, little-known saints and sinners, the book’s pages pay heed to them all, some with tribute, some with reminders of the shame that endured their deaths.

But ultimately, what Singh is doing here is what is pictured on the cover. A blurred photograph of him reclining in a favourite chair with only the soles of his ancient feet in focus, he is showing his contempt for death. He is belabouring it with the sandals that have fallen off many times in many decades and proclaiming, "Do your worst, for I have lived long and richly, and I know that nothing comes next, no heaven, no rebirth, no Valhalla, no virgins with wine." An atheist to the core, Singh even gets the Dalai Lama to admit that without the belief in life after death, he’d have to find a new line of work.

That we all should go to our graves or byres with such courage. That the privations and depredations of religious faith could stop preying on our fears of the dark unknown, the dread that death comes as the end. That we can all be inspired by a life lived with malice towards one and all, yet full of generosity and humour shared widely. And I’ll bet a bottle of whiskey that this is far from his last book.

(Daniel Lak is Miami correspondent for the BBC. He has been in and around India for over two decades.)